What Wealthfront and Betterment Can Teach You About Display Advertising

Are the days of fast-talking investment advisors in $3000 Armani suits, $150 haircuts and golden orange spray tans over?

What we do know is that more and more people are choosing to go with computers for their investment advice instead of living, breathing human beings.

What the heck’s a robo-advisor?

Robo-advisors are automated investment services. You fill out a questionnaire about your income, investment goals and comfort with risk taking. Sophisticated computer algorithms then run through market data and optimize your account.

The jury is still out as far as how well they work, if they can retain their clients in the long-term, and what happens when the market takes a turn for the worst or heads into recession, although robo-advisors claim to provide solid returns during good times and protection during the bad times.

But what does the growth of robo-advisors and other ‘FinTech’ companies have to do with you and Display advertising?

Well, where there’s massive growth and lots of VC money being doled out…

…there are Display ads.

Today’s post takes a look at the Display strategies of four of the largest robo-advisors (in no particular order):

It will also give you a sneak peek at three other robo-advisors who are growing quickly and who, no doubt, will soon be testing out Display advertising as a channel for customer acquisition.

Betterment was launched in 2010 by Jon Stein and Eli Broverman. As of November 2015, Betterment manages $3 billion in assets. As of October 2015, they’ve received approximately $105 million in venture capital.

Let’s check out what they’re doing.

Betterment is all Google:

Could they scale their campaigns and see better results?

Especially if they start testing out ads on Native Ad networks like Outbrain and Taboola. You’ll see that many of other robo-advisors have made Native Ads a large part of their Display strategy. 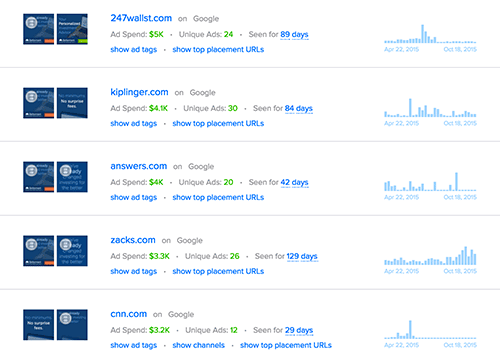 If you look at the trend lines, it seems Betterment has yet to find a publisher that gives them consistent traffic that converts. They’ve even cut a few (CNN.com, for example) out of their strategy entirely. However, they’ve recently started to scale on Zacks.com, a stock investment site. Yet, they have yet to spend significantly with any large publisher, instead choosing to spend a few thousand with each.

The copy does not give any information on how their service works. Very few of the ads list benefits or create curiosity. I think Betterment could do a better job at testing different angles and images. Most of the ads above are pretty much the same.

Betterment’s first landing page highlights the differences between Schwab and Betterment. Betterment has obviously identified Schwab as their main competitor. This is interesting, considering that many people compare Betterment and Wealthfront as competitors. Yet, the traditional personal finance investment services are still the main competitors for any robo-advisor. 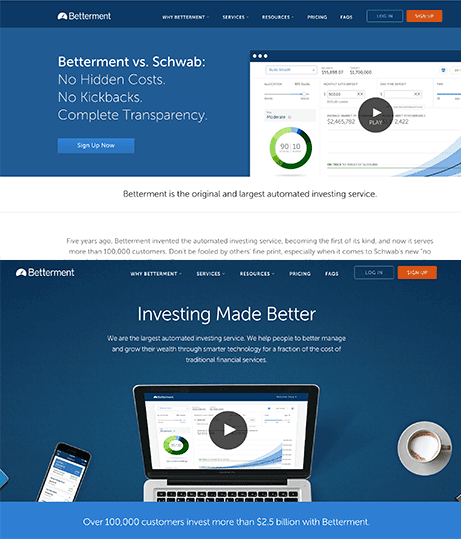 Betterment could do a better job with their landing pages. The language on both pages is not very customer-centric.

“We are the largest automated investing service.”
“We help people manage and grow their wealth…”

Although they’re doing amazingly well, they could probably improve their results with Display just by testing a few new ads and a few different messages on their landing pages.

Wealthfront was founded in 2011 by Dan Carroll and Andy Rachleff. Wealthfront has received ~$129.5M in venture capital and claims to have $2.6B in assets managed. Wealthfront and Betterment are currently the most well-known robo-advisors.

Betterment is all Google. Wealthfront is all Native.

Wealthfront also spends significantly more than Betterment. Adbeat estimates that Wealthfront has spent ~$693,632 over the past 6 months, compared to Betterment’s ~$78,032. 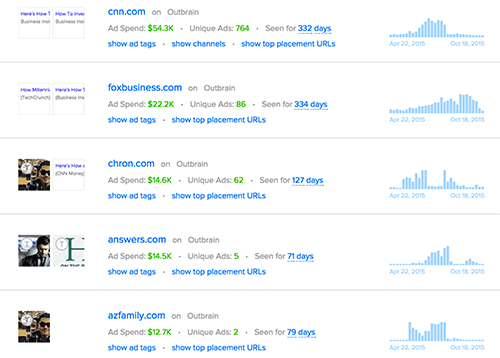 Wealthfront uses social proof and authority by designing ad creatives that link to articles about investing on 3rd party news sites, instead of sending traffic to a blog post or landing page on their own site.

These ads do a great job of drumming up curiosity in their target demographic, which is mostly composed of millennials.

Wealthfront sends most Display traffic to reputable sites that have written about their service. This is much different from what most advertisers do, which is to send traffic to a page on their own site. Why does Wealthfront do this? It’s probably due to the fact that robo-advisors are new.

People aren’t sure how to feel about them yet. Giving your money to someone to invest is a big decision, and Wealthfront probably has a longer buy cycle. These articles from reputable sources talk about how awesome Wealthfront is.

Again, this is great social proof and authority.

FutureAdvisor was founded in 2010 by Jon Xu, Clyde Law, Jared McFarland and Bo Lu. According to Forbes.com, they currently manage approximately $600 million in assets. FutureAdvisor recently made headlines when they were acquired by BlackRock, the world’s largest investment manager.

FutureAdvsior focuses on native and direct buys.
Typical strategy of focusing on contextual ads. Ads being placed on sites about managing money, business or anywhere where someone who has money to invest might be browsing.

FutureAdvisor was spending more on Display in the months leading up to their acquisition.

However, lately they’ve lowered their ad spend to close to zero.

Will they ramp it up again now that they’ve been acquired by one of the world’s largest investment managers?

They spend a significant amount on bankrate.com, which continues to be a stable source of traffic for them. FutureAdvisor also briefly bought inventory directly from kiplinger.com. 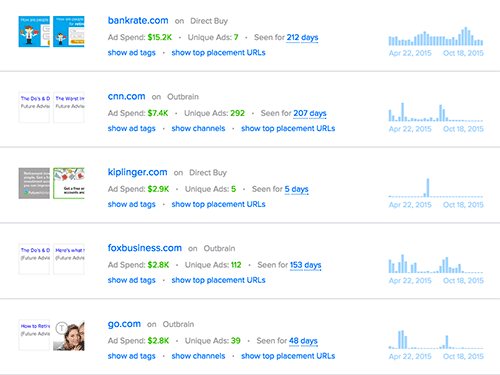 FutureAdvisor does a great job of testing different angles and styles of ad creatives.

Note that they use more emotional copy in their ads, specifically, fear (“Is your portfolio prepared for a bear market?”). 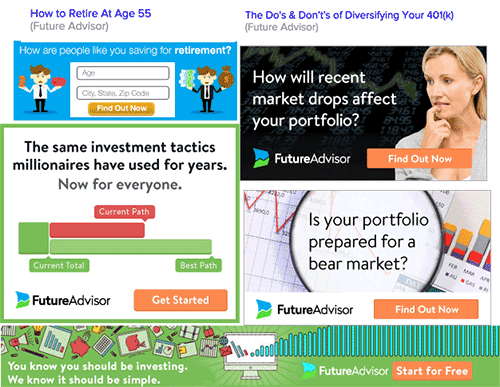 FutureAdvisor sends their Outbrain traffic to this super-short article on how to properly diversify your 401k: 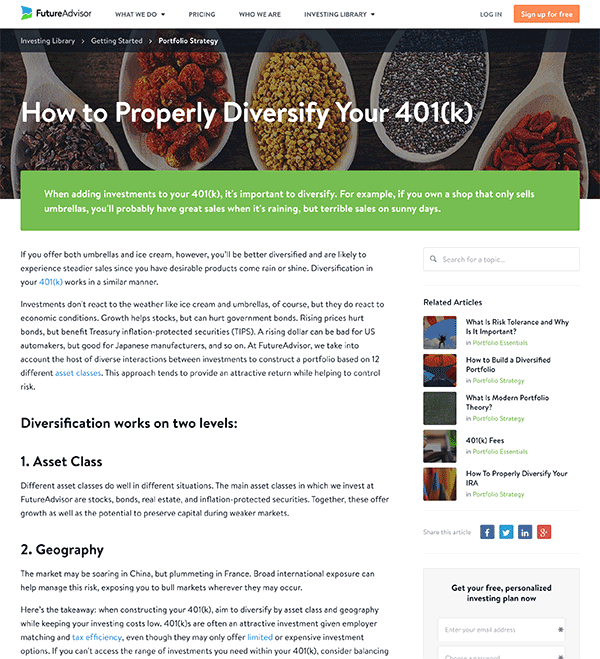 They send Direct Buy traffic to landing pages that have a logo from the publisher they buy inventory from:

And almost all other traffic goes right to their homepage: 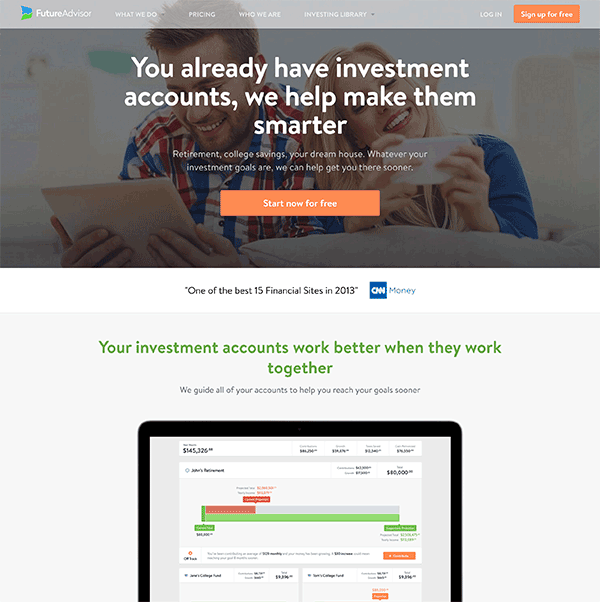 Personal Capital has yet to scale their campaigns. They spent a fair amount around June, but quickly backed down on the amount they spent after that.

Most of their ad spend is allocated to Direct Buys and Taboola Native Ads.

Personal Capital spends the most with bankrate.com by buying inventory directly. It appears they also tested a brief Direct Buy on kiplinger.com, but quickly shut it off after spending $2.9k. Their other publishers are news sites which are within the network of publishers for the Outbrain native ad network. 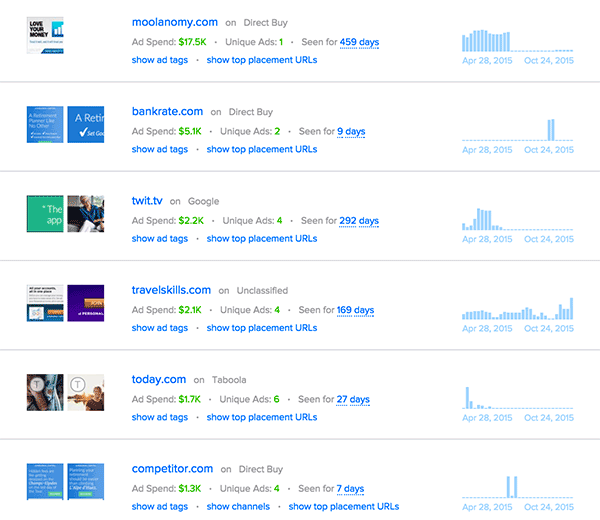 Personal Capital does a good job of testing various angles in their ad creatives.

All of their ads — with the exception of the Native Ads at the bottom — hit a different angle. 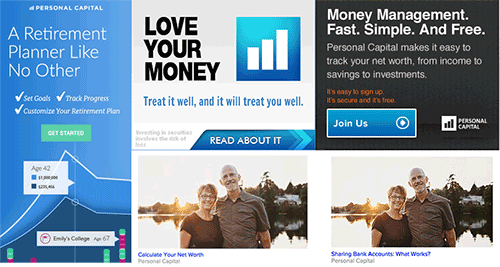 Landing page #1 is an article on their blog: 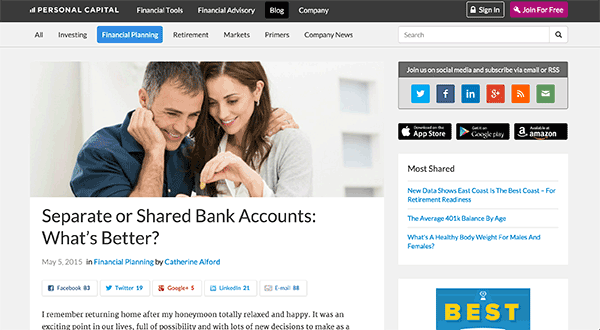 This is the landing page for the Outbrain ads shown above (“Sharing Bank Accounts: What Works?”).

The second landing page focuses on how Personal Capital is the “modern way to manage your wealth”, complete with a mockup of the app on an iPhone: 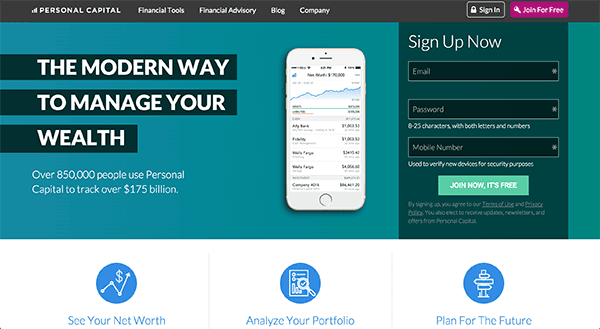 This is a more traditional opt-in/sign-up page.

Other Robo-advisors to Watch Out For

Despite all the venture capital, very few robo-advisors are currently spending on Display. However, it’s quite likely that the continuing influx of venture capital as well as popularity will drive more robo-advisor start-ups to test out Display.

Here are three robo-advisors to keep an eye on over the next couple of months:

Hedgeable is a New York City based start-up founded by twin brothers Matthew and Michael Kane.  Hedgable calls themselves “The Private Bank For Millennials.” Hedgeable has raised $1.85M in funding. As of July, 2015, Hegable has over $35M in assets under management.

SigFig is a San Francisco based start-up founded in 2011 by Mike Sha and Michael Conrad. SigFig raised $15M in 2013. SigFig does not disclose their amount of assets under management.

WiseBanyan was founded in 2013 by Herbert Moore and Vicki Zhou. They call themselves “the world’s first free online financial advisor.” WiseBanyan raised an undisclosed amount in 2014. WiseBanyan has ~$22M assets under management.

Despite the influx of venture capital, robo-advisors have yet to turn a profit. It takes billions upon billions of dollars for one company to become profitable. This means that customer acquisition is the main priority. As Display is one of the main channels for customer acquisition, I imagine you’ll being seeing more and more Display ads for the companies listed above as well as any new players who enter the market.