Although cable TV might have you believe otherwise, the world’s best marketers are NOT drinking whiskey and flirting with secretaries in Manhattan.

Well, they might be drinking whiskey and flirting with secretaries.

But they’re not in Manhattan. They’re in Washington.

The world’s best marketers are politicians. Every year, billions of dollars are pumped into campaign research, marketing and lobbying. Barack Obama and Mitt Romney spent a combined total of $1.2 billion in 2012 — and that doesn’t count money from outside groups or parties

All this money and research means politicians and consultants have become masters in human psychology.

The good news is that a few political advisors have chosen to share what it takes to get someone elected.

Two of my favorite books on the topic are:

These books are filled to the brim with golden nuggets on how a political race is won. These same tactics can also be used to improve your marketing campaigns, no matter what you’re selling.

The best part is you don’t even need to read either book (although I highly recommend it).

I’ve done the work for you and hand-selected a few golden nuggets from each book.

In today’s blog post, you’ll learn how each nugget translates to selling any kind of product or service, and how you can implement it in your Display campaigns and marketing strategy to see better results.

Appeal To Your Prospect’s Identity, Not Their Self-Interest

Via The ALL NEW Don’t Think of an Elephant!: Know Your Values and Frame the Debate:

Interpretation: Your prospect will not necessarily buy your product based on how it can directly improve their everyday life. People do not always buy products based solely on utilitarian factors. In fact, how useful a certain product is often has little to do with why they buy it.

The classic example is a luxury sports car. No one buys a Ferrari because it gets good gas mileage (their cars average between 11mpg and 13mpg). Nobody buys a Lamborghini solely because it makes their morning commute more pleasant. An Aston Martin isn’t a “point A to point B” type car.

People buy a luxury car because of way it makes them feel. They buy a nice car because it elevates their social status. It sends a message to the world: “I’m successful.”

A Kia serves the same basic purpose of a Ferrari. The commute in a Kia is the same. Sure, a Ferrari is able to accelerate much faster and reach a higher top speed, but how often do you even have the opportunity to drive 200mph down the freeway? However, a Kia doesn’t allow you to identify with who you want to be.

And further along the lines of identity…

Paint a Picture of a Brighter Future

“It is claimed that about a third of the populace thinks that they are, or someday will be, in the top 1 percent, and that for this reason they vote on the basis of a hoped-for future self-interest.”

Via The ALL NEW Don’t Think of an Elephant!: Know Your Values and Frame the Debate:

Interpretation: Everyone assumes their big break is on its way. The top 1% in this quote refers specifically to money, but it can really be anything; fame, fortune, that beautiful partner, or that 6-pack of abs. Even though few people have all this, we tend to assume that all this stuff is on its way.

Plus, social media makes it seem like success is easier and more attainable than ever. People constantly post on Instagram and Facebook the results of their success, yet rarely ever pictures of the struggle on their way to the top.

These folks seem relatively normal. This makes people think, “Well, if HE can do it… why can’t I?”

What does this mean for you? This goes back to people buying a product in hopes of gaining a new identity for themselves in the future.

Here’s an example of an ad from financial newsletter publisher Money Morning: 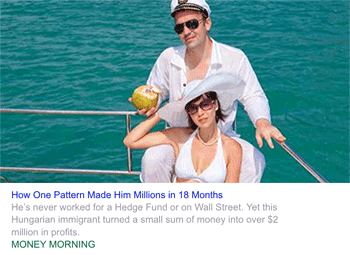 You see a guy drinking out of a coconut on a yacht with a beautiful woman. You’ll want to click and read the story about how he achieved his success. People see this ad and start to imagine themselves as this guy.

Another classic example is in the health and fitness industry. They sell the concept of the new you. Future pacing — “Imagine how you’ll feel when you have that six-pack of abs!” — is huge in the fitness industry. It’s a very intoxicating feeling to sit there and daydream how it might feel when you can finally slip back into those skinny jeans.

This interstitial ad found on Women’s Health Magazine from Lift to Get Lean is a great example: 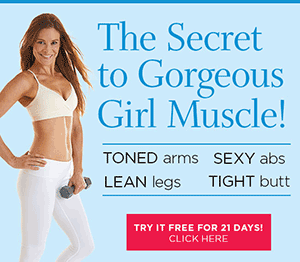 “To work for a small company—or, even better, to work for yourself, be your own boss, create your own life (or lifestyle)—this is what so many of us still hold up as the ideal. We may no longer be a nation of family farmers and shopkeepers, but we still appreciate—and venerate—those who are.”

Interpretation: The underlying theme of this particular passage is self-reliance. No one likes having someone else tell them how to live their life. We look up to the folks who start their own businesses, like Elon Musk, Steve Jobs and Mark Zuckerberg.
This is especially powerful for folks selling financial products or “biz ops”. But this messaging of being able to be your own person can pervade all marketing for all offers, as everyone has someone above them in most parts of their life.

This is especially powerful for folks selling financial products or “biz ops”. But this messaging of being able to be your own person can pervade all marketing for all offers, as everyone has someone above them in most parts of their life.

One advertiser who does this very well is Uber. They’ve spent millions in the past year on ad creatives focused around being your own boss and setting your own schedule.

Not everyone necessarily wants to take the steps to work for themselves, but we do love it when we see people giving a cranky boss either the literal or proverbial finger.

It’s quite easy to find an enemy or someone who is trying in some way, shape or form to control your life. We desire to be autonomous, even though most people are content with working for a paycheck and driving home.

“I learn the language of America. In fact, what you eventually hear either from your elected representatives or in ads for the products and services you use is often spoken first by you and then translated by me.”

Interpretation: If you do any copywriting, you’ve probably heard about how you should write in a conversational tone, and how you should write to your prospect as if you’re talking to a friend. Great advice. Yet, I’d make one tiny modification: go one level deeper. Discover the specific words and phrases used by your market. The words and phrases a 17-year-old high school student living in Miami uses are much different from those a retired 67-year-old woman living in Phoenix uses.

One company that’s doing this is Lynda, an online education company. 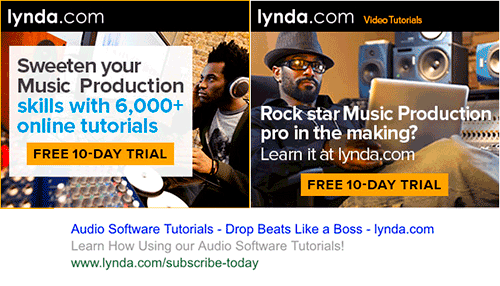 While “drop beats like a boss” might be a bit over the top, the idea is to use colloquial language someone in your target demographic might use.

How do you find that language?

Go to the specific media they read, listen to and watch.

For example, if my target market is a woman who is 40-65 years old with kids, the first place I’ll look is at magazines meant for women in this target demographic. These would be magazines like Women’s Health. Then you look at the headlines. You read the articles. You make note of the specific words they use. What type of language do you see popping up over and over again? 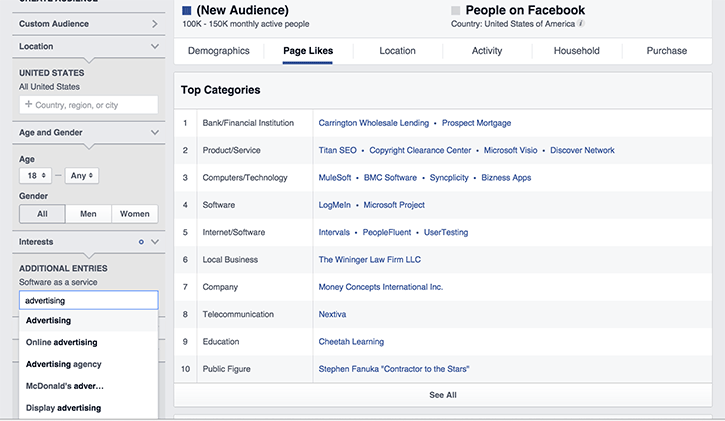 All of this boils down to one thing: do your research.

Repetition Is Key, Even If YOU Are Sick of It

“Remember, you may be making yourself sick by saying the exact same thing for the umpteenth time, but many in your audience will be hearing it for the first time. “Message consistency builds customer loyalty.”

Interpretation:When you find a message that works, it should pervade all your marketing — display ads, landing pages, emails, webinars, everything.

Inside the internet marketing world, it’s easy to see the same style of emails from the same company over and over again. The same companies continually hit the same angles and messages time and time again. As marketers, we often find this annoying.

However, remember that the average person is not a marketer. They don’t pay attention like we do. Therefore, they’ll often need to hear the same message over and over before it sinks in.

“In fact, using a long word when a short one would suffice tends to raise suspicions: “What is this guy trying to sell me? Does he have an ulterior motive?”

Keep your word choice as simple as possible. The average person, even someone extremely intelligent, does not use $10 words in their everyday vocabulary.

People abhor reading bloated, presumptuous copy, because there’s no reason to say abhor when you can just say hate.

It’s Not a Problem… It’s a Challenge!

“Now every “problem”—or, God forbid, “threat”—is spun positively as a “challenge.” Redefining “problems” as “challenges” is a profoundly American approach; a “challenge” is something to be surmounted—quite literally, in fact, like climbing a mountain. “Challenge” implies competition. It means the gauntlet has been thrown down and it’s up to us to pick it up.”

Simply reframe a problem as a challenge. A challenge is like a game. It’s something that can be overcome. What happens when you live up to a challenge and conquer it? You attain a sense of pride.

Humans need a bit of drama and strife in their lives. However, turning that drama from something impossible to possible is the key.

These passages just touch the surface of all the amazing insight contained in each of these two books. I highly suggest you read and take notes on both of them.

What other persuasion tricks have you seen politicians use?