Why should you market to millennials?

With nearly $200M in yearly purchasing power, millennials (born between 1981 and 1996) are changing the way brands advertise their products & services in today’s rapidly-evolving, competitive landscape.

On a surface level, it’s convenient to simply generalize the millennial generation—they’re always on their phones, and spend an inordinate amount of time crafting an online persona, but they’re also the same people who are the most open-minded about social causes like climate change. So, why are marketers everywhere spending valuable marketing dollars to meticulously analyze their spending patterns and psychographics?

The answer’s simple: For brands looking to scale, understanding exactly what millennials want can be an absolute game-changer. Let’s quickly go over a few reasons why you should care about marketing to millennials.

Millennials make up 25% of the United States population:

According to the population projections from the U.S. Census Bureau, millennials will be surpassing Baby Boomers (born between 1944 and 1964) as the largest group of living adult generations. While they successfully outnumbered Generation X almost 26 years ago, they’re only now becoming the most populous (80 million) generation across the country. 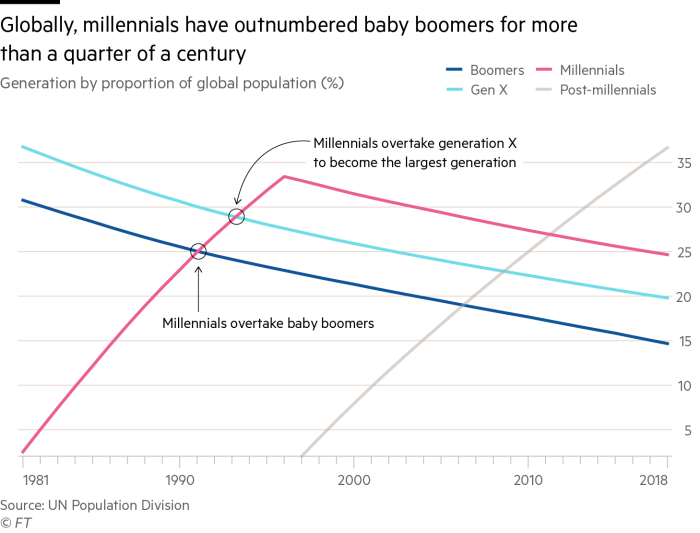 While most millennials haven’t reached their peak purchasing power yet (due to student loans and starting a family), they are certainly heading that way, and brands realize the importance of getting in front of them early. There are also more millennials in the workforce than other generations, with an expected $1.4 trillion in disposable income by the year 2020.

….and they are smart.

Millennials are the best-educated group of young adults in U.S. history:

Today, approximately one-third of millennials have at least a four-year college degree, and 54 percent of them have already invested in a business of their own or are planning to do so in the immediate future.

Given that 25 percent of the millennials are parents and 42 percent have student debts upwards of $30,000, most of them haven’t reached their peak purchasing power yet. However, they’re slowly catching up—for example, 87 percent of the working millennials currently hold senior management positions in their respective workplaces, and are expected to amass $1.4 trillion in disposable income by the end of this year. In fact, in order to combat their lower-income, millennials are becoming increasingly focused on building up their savings.

Ultimately, brands targeting millennials have to go an extra mile to position themselves In front of a target demographic that thinks twice before parting with their hard-earned money.

Millennials are also averse to the idea of a typical 9-to-5 job and are instead more interested in creating unique, innovative products that have the potential of changing the world. The average millennial mindset is fairly decentralized, which means, they prefer conducting their own research to form an educated opinion about brands (as opposed to “following the herd”) they want to invest in.

….and they’re more receptive to new technologies and online platforms.

Millennials are 2.5x more likely than other generations to be early adopters of technology:

Not only do all millennials actively use the internet today, but 56 percent of them are one of the first ones in their peer group to try out and adopt new technologies. On the other hand, Baby Boomers face some unprecedented barriers—like physical challenges operating multiple devices—and are skeptical about the internet’s impact on society as a whole.

Since millennials almost always have one of their mobile devices on them and are guilty of checking their smartphones at least 43 times a day, they’re much easier to market to than Baby Boomers who are less tech-savvy. Additionally, 46 percent of them also use ad-blockers on their desktops and laptops, making it difficult for brands to reach them with “traditional” digital advertising.

As a result, in 2018 alone, 68 percent of businesses have incorporated mobile marketing into their long-term marketing strategy.

The vast majority of them make purchasing decisions based on brand advertisements, peer recommendations, user-generated content, and influencer endorsements that they come across on their social newsfeed. On the contrary, Oracle found that social media ads did not inspire action from both Gen X (born between 1965 and 1979) and Baby Boomers. In fact, more than 50 percent of Boomers have either never seen the appeal of social commerce or are unaware of what it means.

In the next post, we’ll go over a few ways in which you can optimize your current advertising strategy to attract millennials.