How Uber and Lyft Run Their Paid Traffic Campaigns

Uber and Lyft are two of the fastest growing businesses in the world.

Combined, Uber and Lyft have spent an estimated $2M+ on Display advertising in the past 6 months. This is a drop in the bucket compared to what both companies are valued at ($41B and $4B respectively), but both companies appear to be making a big push at the end of the year/beginning of 2016 to use Display to recruit more drivers.

Interested in seeing how two of the world’s most talked about companies run their paid traffic campaigns?

Uber needs no introduction, as I would wager that most people reading this post have either taken an Uber before or have at least heard of them. It would be strange if you haven’t, because Uber is considered one of the fastest growing companies in the world. Uber has raised ~$8.21B in venture capital and is currently valued at over $41B.

They currently spend millions a year on display advertising, doing lead generation to get more drivers for their service.

Uber has spent an estimated $1,371,392 in the past 180 days. Most of their ad spend has been allocated to MediaMath, Google Display and Advertising.com. It looks like they are making a big end-of-the-year push as their spend in December has spiked a few times.

Uber chooses mainly large publishers that appeal to a general audience. However, if you drill down to a few of the placements on these sites, you’ll notice they show their ads on pages related to jobs and careers. This makes sense, as you’ll see that almost all of their ad creatives are focused around hiring more drivers as opposed to getting more passengers to download and use the app. 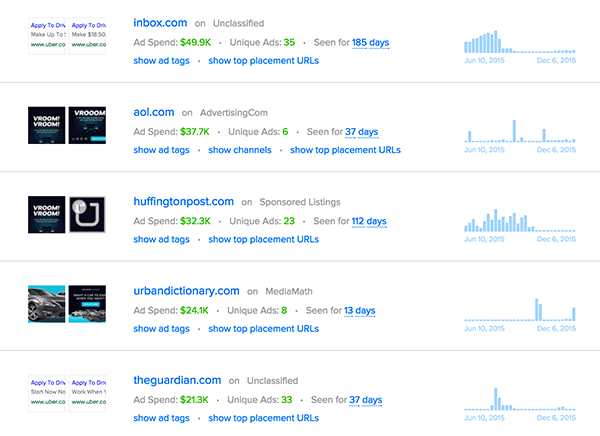 Uber’s ad creatives are slick, modern and pleasant to look at. All of their most seen ad creatives cater to potential Uber drivers. They test a few different angles, including the chance to earn more money, lease a car for just $250 and become an “Uber Partner.” Uber also uses a combination of text ads and banner ads, almost seeming to prefer text ads over banner ads. 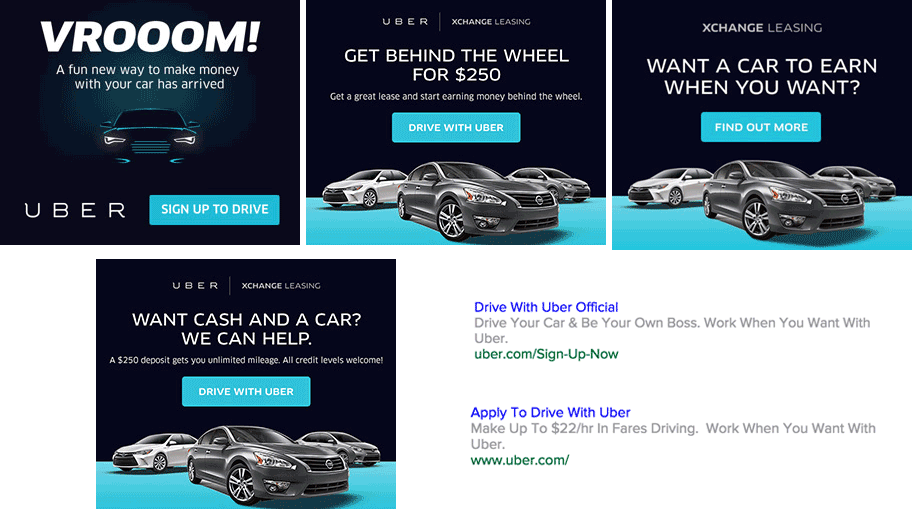 Uber is split testing two similar pages with different headlines, sub-headlines and slight differences in the order of the icons and copy below the lead generation form: 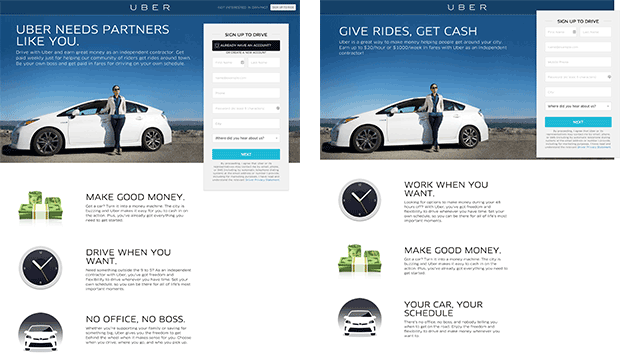 The first headline and sub-headline combination focuses on how you get to become an Uber partner, help people, work on your own time and be your own boss:

The other page Uber uses is for their Uber Xchange car lease program. One of the keys to Uber’s continued growth is in hiring as many drivers as possible.

But what happens if you want to drive but don’t have or can’t afford your own car at the moment?

Uber Xchange program will help you out with the leasing. 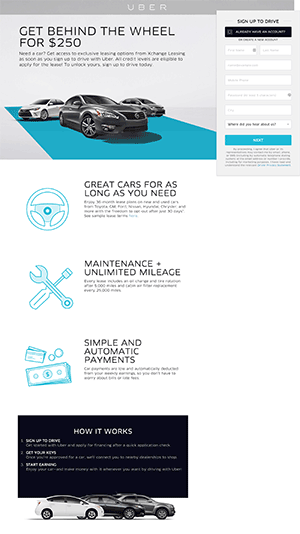 Lyft is currently Uber’s biggest competitor. Lyft has raised $1.01B and is currently raising $500M at a $4B valuation. Although they are far behind Uber, $4B is nothing to scoff at.

They recently cut a deal with Uber’s biggest competitor in China, Didi Kuaidi, that allow the two services to share riders across continents.

Lyft has spent an estimated $914,816 in the past 6 months. Lyft opts to use Google Display over all other networks. They’ve allocated approximately 75% of their ad spend to Google. 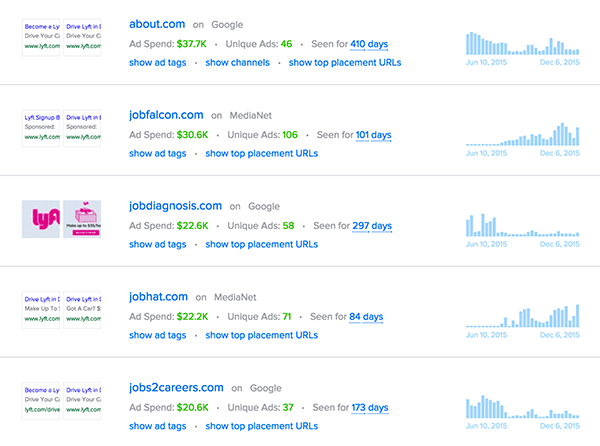 It might look strange that Lyft’s top spending publisher is About.com. However, About.com has many different channels about different topics.

If we dig deeper, we can see that Lyft mainly buys ads on the “Careers” section of About.com: 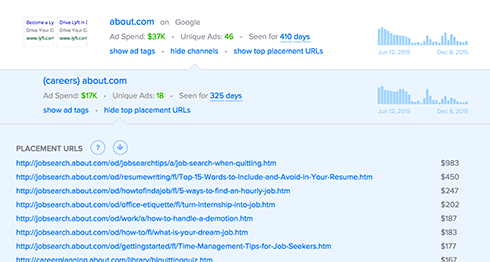 Lyft tests a few different parts of their ad creatives. One major difference is that they use specific locations in their ads (“Drive Lyft in DC”). They also test different amounts of money and time periods to see which works the best ($35/hour vs. $1400/week vs. $1,500/week). Lyft’s ads are more cartoonish than Uber’s ads, and they only focus on the amount of money a driver can potentially make.

Lyft sends most traffic to their homepage. This might not be the best option since the page is designed for both passengers and drivers, whereas the ads are focused on hiring drivers.

However, Lyft does have a landing page similar to the driver lead generation page Uber uses:

Uber is still far ahead of Lyft when it comes to revenue, riders, drivers and number of cities covered. Yet, Lyft is making a big push on Display. Will they catch Uber? Maybe, maybe not. However, their Display strategy looks fairly sound and is something that even Uber could learn from.