Note: This is Part 2 in a two-part series that reveals the two presidential candidates’ Display strategies. Click here to see Part 1: Hillary Clinton.

As of June 2016, there were rumors that the Trump campaign was running low on funds.

Subsequently, Trump blatantly started asking for public donations from supporters. There have been a few controversies over who he is asking and who is giving Trump these funds.

We’re not here to talk about those controversies.

We’re here to talk about one of the methods he uses to garner support and campaign cash from supporters:

Up until about a month ago, Trump’s team didn’t spend a cent on digital advertising. Recently, however, the Trump team has pulled out the big guns on Display. Trump has begun to spend hard.

You can learn a lot from how Trump is running his campaign.

If you’re interested in seeing how a presidential hopeful’s team runs a multi-million dollar ad campaign in the final months of this year’s election, keep reading.

“The Donald” has spent an estimated $1,298,688 on Display over the past 60+ days. Trump allocates close to all of his ad spending to the Google Display Network. He allocates much smaller portions to Advertising.com and Direct Buys.

Trump’s publisher selection strategy is similar to that of Hillary Clinton. Trump’s team buys most of their ad inventory on general political news sites, conservative news sites, and online magazines. 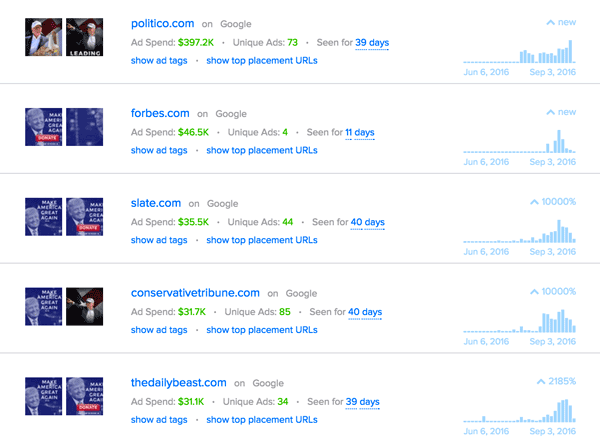 One thing that caught our eye is that both candidates are good at buying traffic on specific pages and placements that are most relevant to their ads and messaging. Both candidates’ media buying teams rarely make the mistake of purchasing inventory on a page that is likely to get a prospect not in their target audience (this is a mistake that too many advertisers make).

For example, here are Trump’s top placements on politico.com:

But you’ll also notice that Trump’s team got a bit more creative. His media buyers also spend heavily on Forbes.com.

Trump typically places his ads on pages related to celebrity net worth:

What’s the lesson behind this?

Many online magazines and news sites contain sections that are relevant to your offer. The entire site might not be suitable, but large publishers like the Huffington Post or Forbes will have a few high-traffic placements that can perform well for your offer. This strategy is perfect for further scaling your campaign.

Both Trump and Hillary do an excellent job at selecting publishers and placements.

However, things start to get interesting when you dial down into Trump’s ad creative and landing page strategy.

Trump tests a few different styles of ad creatives. You’ll notice that most of his creatives contain pro-America messages and imagery. Hillary Clinton tends to use less of this type of imaging. For example, here are some of the first ad creatives Trump launched that contained symbols of American success, like the NASA program:

You’ll also notice that Trump was A/B testing different calls-to-action in his earlier ad creatives. However, the A/B testing did not stop here.

Here is a collection of recent ads that Trump has recently started testing: 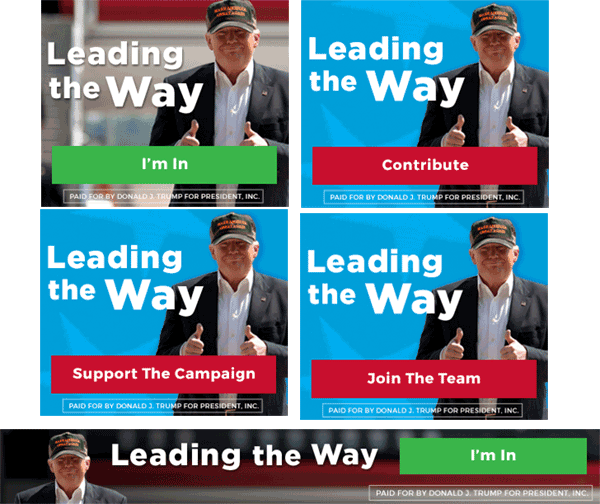 However, the A/B testing did not stop here.

Here is a collection of recent ads that Trump has started testing: 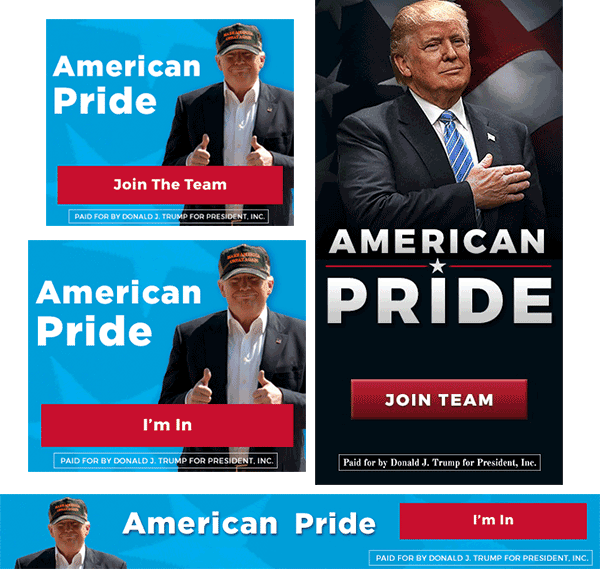 Which style of ad is winning?

However, initial Adbeat data shows that Trump has been spending the most on the “Leading the Way” creatives.

Trump used to send all traffic to this “donation funnel”:

You’ll notice that the first page is a simple opt-in page based on the promise that he will “bring jobs back to the U.S.” The second page is a donation page that the user sees after opting in to Trump’s email list.

Trump has recently begun to allocate more of his ad spend to send prospects directly to this donation page: 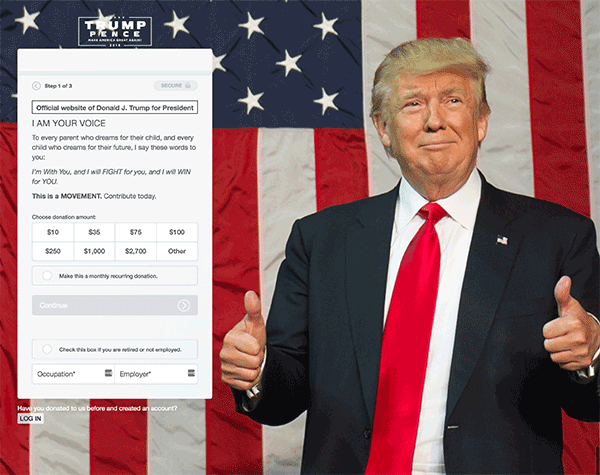 You’ll notice that the imagery on this landing page is in line with the imagery in his ad creatives, which shows typical Americana symbols.

Trump’s team has also been testing another opt-in page that contains a large image of Trump and his running mate Mike Pence: 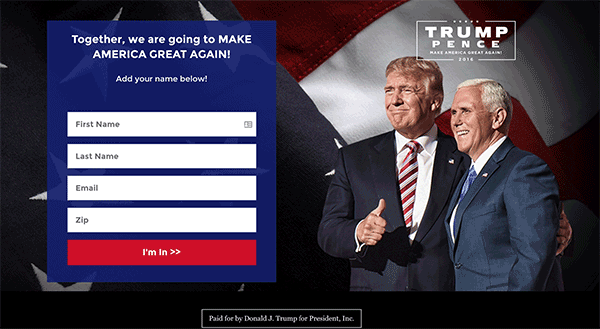 If you’ve read part 1, then you’ll have noticed that there are many similarities between both Trump and Hillary’s ad campaigns. They both spend heavily on the Google Display Network, they both use very similar landing pages, and they both are ramping up spending as we get closer and closer to the election.

As of the publishing date of this blog post, Trump is slightly behind Hillary in the polls. Will his last effort on Display help give him the advantage he needs to win the election?