According to Statista.com, Native advertising spend is expected to reach nearly nine billion U.S. dollars by 2018.

Who’s spending all this money?

It’s not the big brands. It’s not the direct response advertisers. Although both continue to direct more ad spend toward native.)

Some of the top spenders on networks like Outbrain and Taboola are ad arbitrage sites. These are the viral content, celebrity gossip, and sports news sites that make money off of advertising — specifically, using Native Ads to bring in cheap traffic in the hopes that those people will click on ads that offer a higher payout.

Check out this blog post all about ad arbitrage on viral quiz sites:

Now, monetizing these sites can be a tricky endeavor.

You need a lot of traffic at a cheap price.

You need to optimize your site to get maximum ad clicks.

And you need a lot of content created on a daily basis.

But not just any old content. You need content that a general audience will be interested in and will not be able to help themselves from clicking on.

The Sins of Kim Kardashian and Miley Cyrus

If you look inside Adbeat, you’ll see most articles promoted on Native Ad networks involve celebrities. 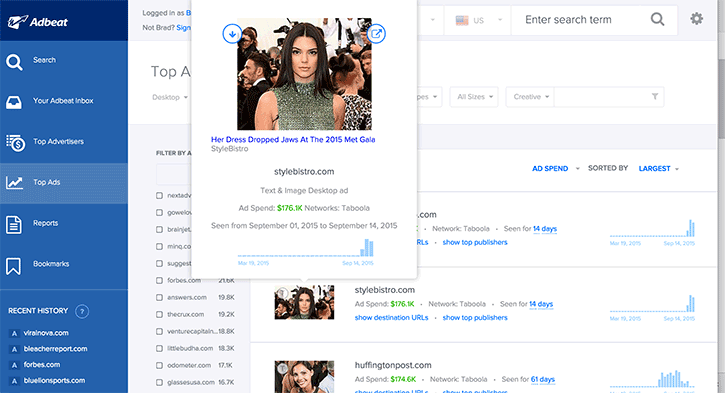 We love our celebrities here in the USA. In fact, society tends to be more interested in Kim’s baby, Lindsay’s drug problem and Kanye’s ego than in their own lives. You see this obsession reflected on TV, in the supermarket tabloids and now with Native Advertising.

Yet, celebrities alone aren’t enough to drive the type of clicks traffic you need to run a successful viral site. There must be another emotional driver, some sort of emotion or dramatic event the average person can relate to.

After analyzing the themes on Native Ads, we realized a lot of themes used with Native content fit into the model of “The 7 Deadly Sins”. The 7 Deadly Sins are considered to be humanity’s vices. These are the vices that run society and are the main drivers behind why we do what we do. Marketers capitalize off these “sins” every single day, and they’re an important piece of the machine that drives Native Ads.

In this blog post, you’ll see examples of the 7 deadly sins — lust, gluttony, greed, wrath, sloth, envy and pride — and how they tie into a successful Native Advertising campaign.

Humans are innately sexual beings. One study from Ohio State University estimates that the average man has a sexual thought at least once per hour. This same study shows the average woman thinks about sex approximately 10 times per day.

Advertisers are aware of this and have capitalized on it for years. Using sexual images in advertising is one of the oldest tricks in the book. This means, of course, that it works with Native Ads.

But lust doesn’t just sell perfume, clothes or male enhancement pills. It works in many different verticals, including ones that are completely unsexy.

For example, take a look at these three ads:

What product or service do you think they’re advertising?

This begs the question:

Why does lust work for even the unsexiest of industries?

It has to do with the way our brain reacts when we see an attractive person.

Researchers at the Institute of Cognitive Neuroscience at University College in London discovered that our ventral striatum lights up when we see a picture of an attractive face. The ventral striatum is our brain’s reward center. Your brain activates your “feel good” chemicals whenever it sees someone you’re attracted to.

Our body and brain crave these chemicals. Therefore, we want to keep looking at and reacting to images of attractive people.

However, some advertisers are a bit more blatant.

For example, this ad from BlueLionSports.com:

Even AARP (formerly the American Association of Retired Persons) mixes nostalgia with sex appeal in this Native article: 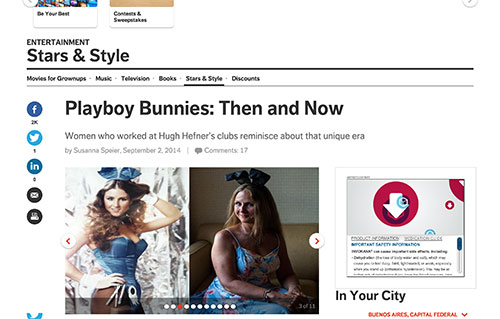 The fact of the matter is that sex still sells. It’s one of the main drivers behind human behavior and always will be. Society might change, the world might change, but humans will always be humans.

Gluttony, or overconsumption, is typically associated with someone scarfing down large amounts of food.

How does this translate to advertising?

Take a look at headlines on the supermarket tabloids.

You’ll often see stories of celebrities who used to be fit but gained a few pounds for one reason or another.

This is commonly referred to as “fat shaming”.

Tabloids use it when a specific celebrity is pregnant, or after she’s given birth yet still holds her “baby weight”.

Here’s one example of Kim Kardashian from Star Magazine: 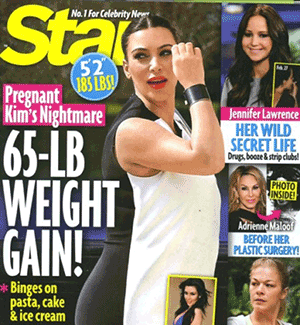 The copywriters and marketers who work for tabloids are some of the best in the world. They know what types of stories grab attention. Many of the news stories and headlines you’ll see at the supermarket will also work online. 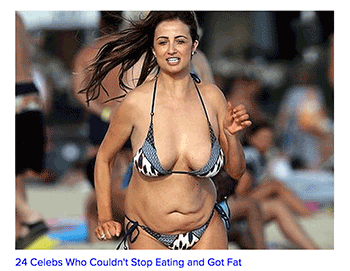 In other words, the ads show people using their riches to buy exorbitant cars, homes or jewelry.

In the sports and celebrity world, success and excess tend to go hand-in-hand.

Here’s an ad for a slideshow that lists the 20 dumbest things athletes have bought (Spoiler: Scottie bought a $4.3 million Gulfstream jet that couldn’t fly.): 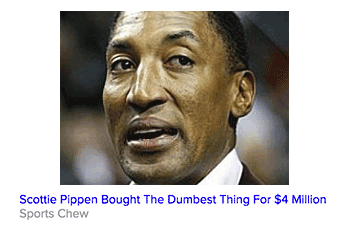 People tend to have mixed feelings about celebrity overconsumption.

On one hand, it’s appalling. We say, “Who needs all that stuff?”

On the other hand, we’re strangely impressed at their incredible wealth and ability to blow millions on whatever they want.

This drives many people to seek the same level of wealth.

But, more often than not, it seems that people are more interested in the greed of others.

Again, we go back to celebrities. 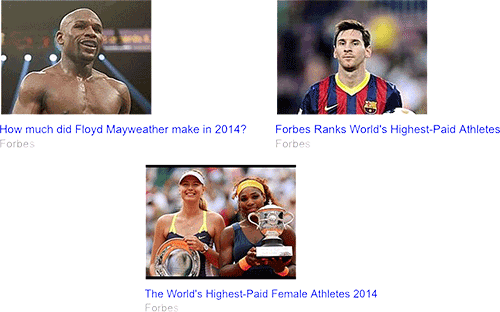 However, it’s not just limited to the most famous sports stars or celebs. Here’s another group of ads from various advertisers that list the wealthiest people from various industries/countries who might be less famous: 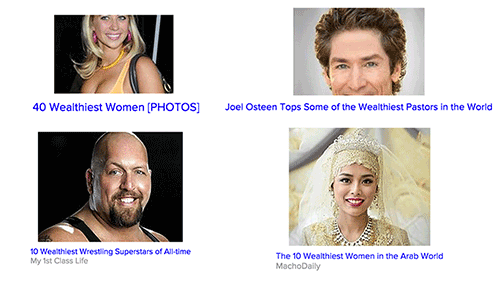 Again, combining celebrity with money is a big draw. People love to see others living large.

Sloth is one of the main sins present in the diet and fitness industry. Eat this pill, herb or vitamin and lose fat while eating that Big Mac combo: 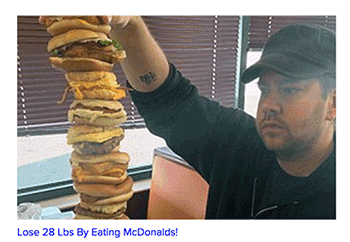 Want to lose weight but hate going to the gym?

Here we have an ad that literally uses the word “lazy”: 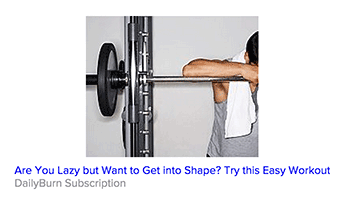 But sloth isn’t just limited to health and fitness.

Sloth is also one of the main emotional drivers behind the finance/make money market. Everyone wants to be rich, but most people don’t want to do the work desired to achieve millionaire status. “Get rich quick” schemes and shady “Biz Op” opportunities have been using sloth for years.

And when you combine greed with sloth?

You’ve got some really compelling ads: 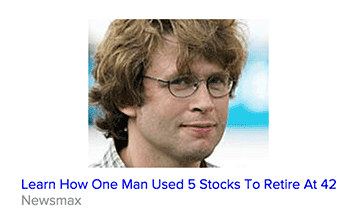 Our society praises people who get rich off the stock market. Every day, a new story pops up about the latest “hot stock” that can make you rich, or some unknown company about to go public that will bring you massive amounts of wealth. A lot of this comes from the “penny stock” market—cheap stocks that people think might be the next Google or Microsoft. 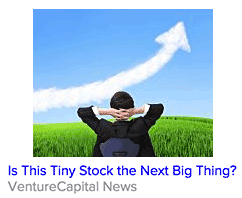 These stories give the impression that making money on the stock market is easy. All you have to do is pick a few hot stocks and watch your net worth soar overnight. That’s not how it works, and most people know this. However, that doesn’t make these ads less tempting to click on.

Wrath combined with curiosity was the fuel behind a lot of recent clickbait headlines based off of this old John Caples ad from 1926: 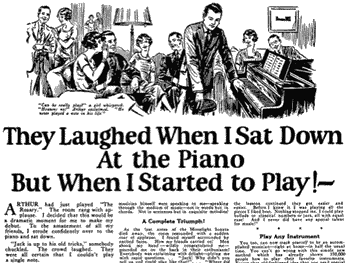 Wrath literally helped grow all these viral sites, like ViralNova, which was recently sold and could be worth as much as $100 million.

One trending theme based around wrath is this ad for a female anti-aging product:

As of the writing of this post, this ad is all over the place.

The thought of losing beauty as we age is something many people have issues dealing with. There’s the common Hollywood story of powerful, rich men leaving their lifelong partners for someone much younger. This concept combined with a clickbait headline is one of the main reasons why these types of ads work so well.

Many of the ads you’ve already seen could be classified under envy. Most of us are envious when we hear just how much wealth another person has. However, this is a more subtle use of envy.

Another more direct use of envy is an ad like this: 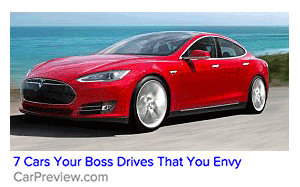 Many people dislike their boss or authority in general.

Often, someone above us in the hierarchy has something that we want, in this case, expensive cars.

In continuing with the fact that we live in a culture of voyeurs, often reading about the envy of others is more interesting than our own envious feelings: 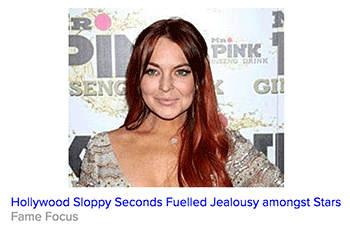 The tabloids and Entertainment Tonight-type TV shows are filled with stories of jealous, envious celebs.

One of the common sports clichés you hear the announcers say before a game is “pride is on the line.”

It only makes sense that sports publishers would promote content related to specific players being better than others, especially the big players.

The pride of being the best — being the “top dog” — is ever-present in sports. People feel pride for their sports teams and communities. Many people live vicariously through their sports team. They feel the same pride and passion (maybe even more) than the players themselves.

Finding a good piece of content that works on Native can be a bit of a challenge. Seeing what works for other advertisers and publishers is one of the easiest ways to come up with fresh ideas for content that people love to read and click on. You can’t go wrong by combining celebrities with the 7 Deadly Sins.