The Razor War on Display Advertising (Gillette vs. Dollar Shave Club vs. Harry’s)

In 1901, King C. Gillette had a revelation that would change the way products are sold forever.

Gillette was a salesman at the Crown Cork and Seal Company (CCK). CCK sold the first disposable bottle cap; the “crown” style cap you find on most glass bottles. After seeing the success of the crown cap, Gillette realized there was potential for other disposable products.

He specifically saw an opportunity in the razor blade market.

Because back in the olden days, men needed to sharpen the blade with a leather strap every day. This was tedious and time-consuming.

So, Gillette created the first disposable safety razor in 1901.

The rest is history.

Disposable razors became a hit. Gillette went on to rule the industry.

Gillette was acquired by Proctor and Gamble in 2005 and has a net value of ~$20B dollars. According to Forbes.com, Procter & Gamble controls ~70% of the global razor market, mostly through the Gillette brand.

For years, Gillette was the 800-lb gorilla in the room that couldn’t be stopped.

Mark Levine and Michael Dubin meet at a holiday party. They start chatting about the outrageous costs of razor blade cartridges. And just like King C. Gillette had an idea that would change the razor blade industry, so did these two men.

“What if someone started a subscription service that offers razor blades for an affordable price?”

Dollar Shave Club charges ~$1/month for 5 razor cartridges. This price is much lower than what Gillette and other brands typically charge.

Dollar Shave Club had some initial success. They even secured a seed round of $1M.

But the business didn’t really take off until their “Our Blades Are F***ing Great” video went viral:

This video has led to a massive growth spurt over the past few years.

In 2015, they raised $75M at a valuation of $615M dollars. Not too shabby for an idea developed during a holiday party.

Online razor blade sales have skyrocketed over the past few years, and other subscription services have popped up. The most well-known is Harry’s (who raised $122.5M and bought a German factory after only being in business for 10-months). A few others include 800razors.com, wetshaveclub.com, and Gillette’s subscription service, Gillette Shave Club.

All of this begs the question:

Is it possible to knock-off a billion dollar company with the help of Display advertising?

First, let’s take a look at all three companies’ strategies side by side.

The graph below shows each company’s ad spend over time: 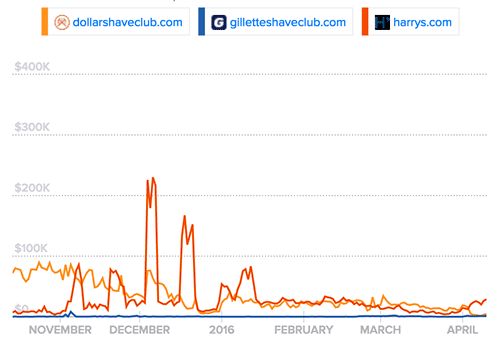 You’ll see that both Harry’s and DSC have spent heavily on Display over the past year.

Yet, both companies began to taper their spend around the beginning of 2016.

Could this be because of the lawsuit? A change in marketing strategy? It’s hard to know for sure.

However, both companies continue to outspend Gillette.

Which brings us to the next point: how much does Gillette spend?

So, now that you know how each advertiser spends, let’s see what they have in common.

Well, one of the best ways for any advertiser to optimize their campaigns is to uncover where their competitor spends their ad dollars.

Now, the target audience for Gillette, Harry’s, and Dollar Shave Club is pretty much the same. This means that all three companies could benefit by placing ads on similar publishers.

Here are what these advertisers have in common in regards to ad networks, publisher categories, channels, and publisher sites:

All three brands tend to favor Native ad networks like Taboola and Outbrain. They all choose to allocate their spend to news, technology, and sports publishers. Gillette, which has yet to ramp up their spend, could probably benefit by buying more traffic on publishers that Harry’s and Dollar Shave Club allocate large portions of their spend.

Now let’s take go one level deeper, and check out each company’s strategy on the individual level.

Harry’s was founded in 2011 by Jeffrey Raider and Andy Katz-Mayfield.

Their overall marketing message centers around “German quality” and their low prices.

In 2014, Harry’s purchased a German factory. This allows Harry’s to keep prices low/use a unique marketing angle. Many consumers associate Germany with quality and luxury, due to the reputation of German-made cars like Mercedes-Benz and BMW.

You’ll often see Harry’s use phrases like “German engineered” in their ad creatives and landing page copy (along with Gillette’s rebuttel in their ad copy).

Harry’s has spent an estimated $5,368,832M on Display over the past 6 months. Harry’s allocates most of their ad budget to the Google Display Network, Taboola, and Advertising.com. 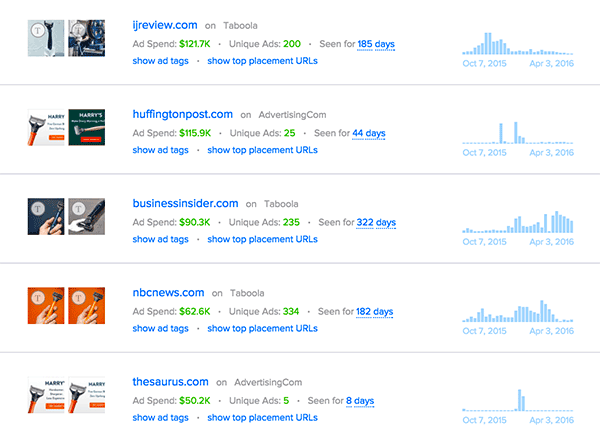 You’ll also notice the “German Blades” copy shows up in many of their ads. 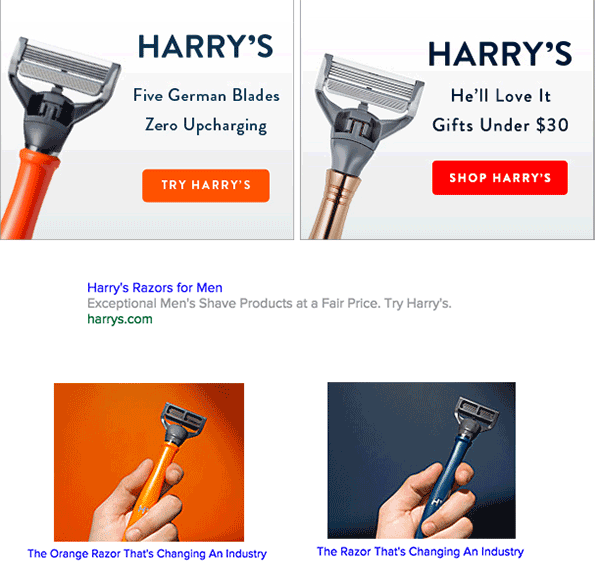 Just like their ad creatives, Harry’s tests  many landing pages across all ad networks.

Here is just a small sample of the landing pages Harry’s is currently testing: 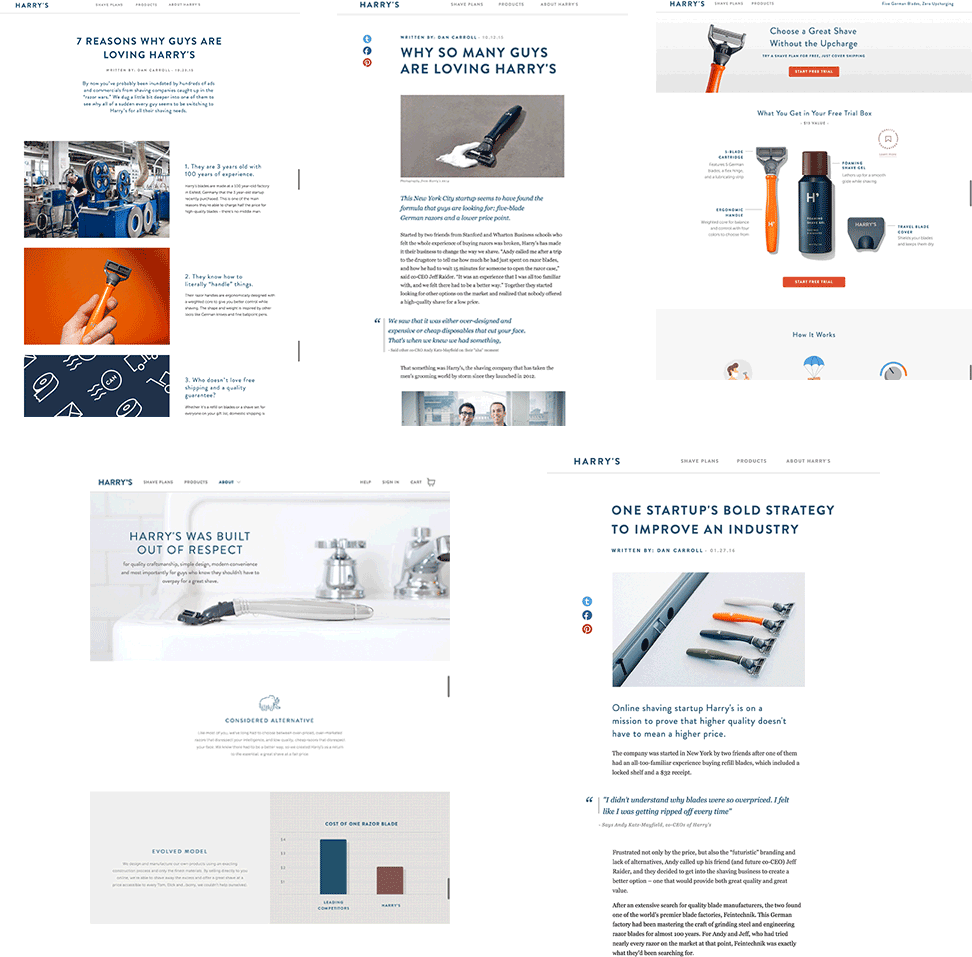 This blog post will only focus on their Gillette Shave Club strategy, since we’re only focusing on subscription blade companies.

Most of that ad spend has been allocated to Outbrain and Direct Buys: 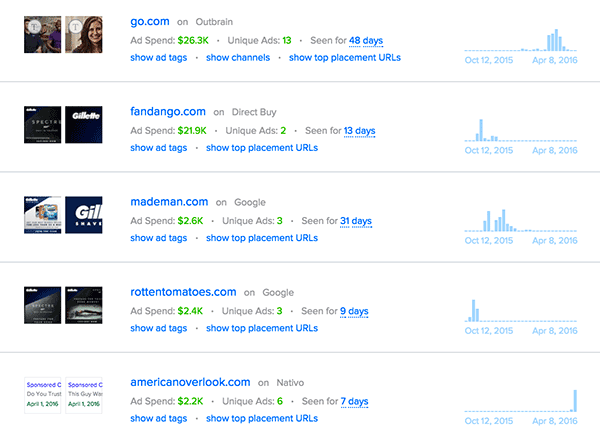 They have ads for their promotion with Spectre (the latest James Bond movie, now a few months old) and a simple 300×250 ad with a shot of the blades and a bit of copy talking about the monthly service.

Yet, their most interesting ad creatives are their Native ads.

Harry’s bought a factory in Germany and thus uses the “German Engineered” angle.

Gillette is using the “South Boston” angle, which we’ll talk more about in the next section.

Gillette is only split testing their Gillette Shave Cub homepage and a long-form page about the South Boston factory. 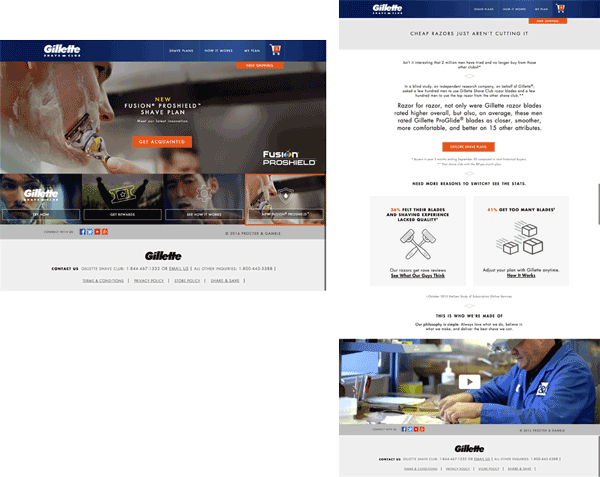 The bottom line is this: it’s going to be hard for Gillette to compete on price with startups.

However, Gillette does have the upper-hand in one category: their history. Gillette has been a household name for over a century. Not to mention that they manufacture the majority of their products in a South Boston factory, aka “Gillette World Shaving Headquarters”.

What’s the big deal about this?

It’s no secret that many large companies have moved their factories overseas. Many Americans believe that overseas manufacturing has taken jobs away from American workers.

“Made in the USA” is now a selling point for many companies, as many people assume “Made in the USA” products help support the American worker, and provide a higher quality product. One survey shows that 78% of consumers prefer to buy products made in the USA.

Gillette’s marketing might not be as clever as that of the Dollar Shave Club, but they do know how to tug at America’s heart strings.

Dollar Shave Club was founded by Mark Levine and Michael Dubin in July 2011.

Dollar Shave Club has raised a total of $163.5M in funding.

Most of their ad spend is allocated to Outbrain and Taboola. Direct Buys (buying inventory directly from a publisher) come in a distant third. 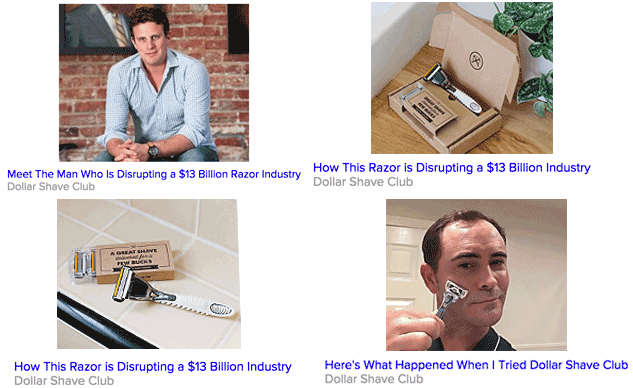 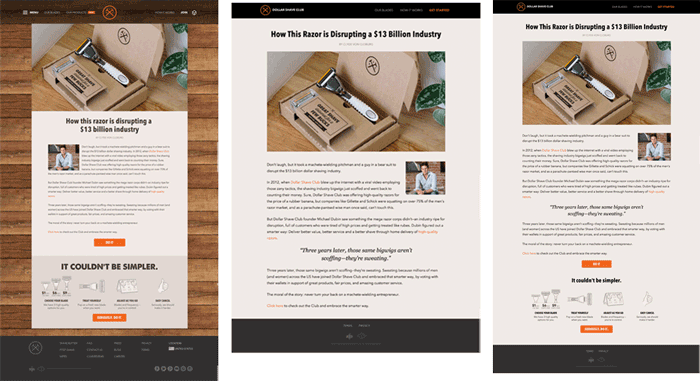 All three of these landing pages are in longer-form article format. There are a few diagrams and pictures of the founder, but the overall design of the page is made to look like an organic blog article.

Is it possible that these startups could take down a billion dollar giant with the help of Display advertising?

Gillette still has the majority of the control of the industry, so the answer is: probably not any time soon. However, Display Advertising combined with their other marketing efforts has definitely had an impact in helping these razor blade companies take a bite out of Gillette’s cake.