The Battle of Streaming Video on Display: Netflix vs. Hulu vs. Amazon vs. Sling TV

Do you binge-watch Netflix?

A recent Deloitte survey found that 70% of respondents reported binge-watching TV shows on Netflix and other streaming video services.That comes out to an average of five episodes in one sitting.

The annual Netflix report claims that subscribers watch an average of 1 hour and 33 minutes of programming per day.

Needless to say… we’re watching A LOT of Netflix.

The fact is that fewer and fewer people watch “normal” television. Many of us prefer to consume media through streaming video services.

Although Netflix seems to be the current king (they have an estimated 72 million subscribers), there are multiple other streaming video services who want to compete for our time and money. Many of these services are using Display advertising to drive subscriber growth.

In this blog post we’re going to look at the Display advertising strategies for four of the largest online streaming video services:

Amazon has spent an estimated $17,541,120 on Display over the past 6 months. Approximately $4 million of that total spend has been allocated their Amazon Prime Video campaigns (Campaign data shown below has been gathered with Adbeat’s new Campaigns feature). 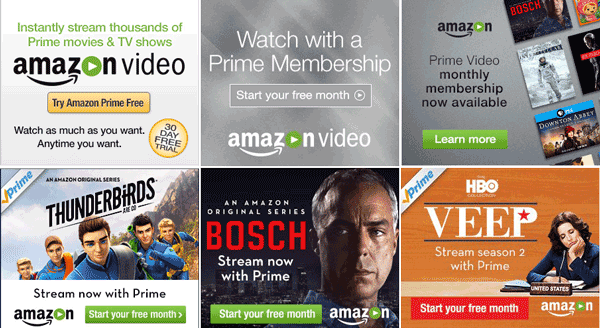 The ads all follow your typical 300×250 banner ad layout. All ads have a clear headline, the Amazon logo, and a green call-to-action that offers a free trial.

Amazon allocates almost all of their ad spend to buying traffic on Internet Movie Database (IMDB). 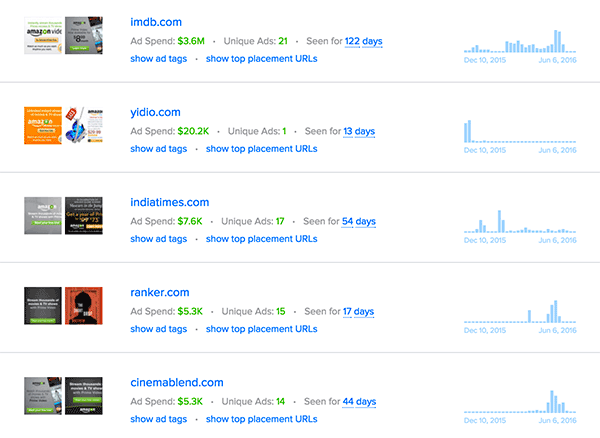 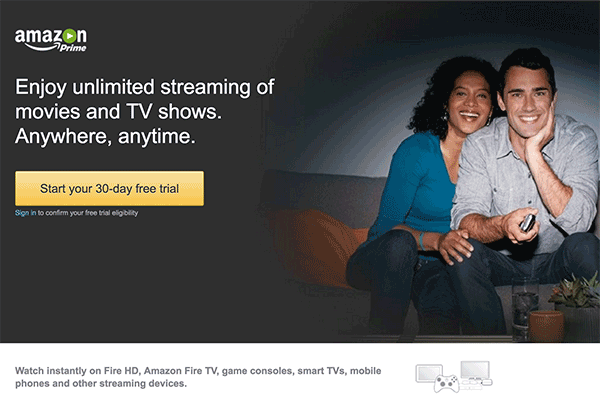 They also send traffic to similar pages shown below. You’ll notice that the only difference is that these landing pages include a tiny picture and a description of the TV show below the call-to-action button.

Netflix has spent an estimated $829,056 on Display advertising over the previous 6 months. Most of that spend has been allocated to Direct Buys (directly buying inventory from a publisher).

Unlike Amazon, Netflix uses very few branding-style ads. Almost all of their ad creatives promote their original movies and series.

The majority of Netflix’s ad spend goes towards Direct Buys on nytimes.com, ew.com, and imdb.com. 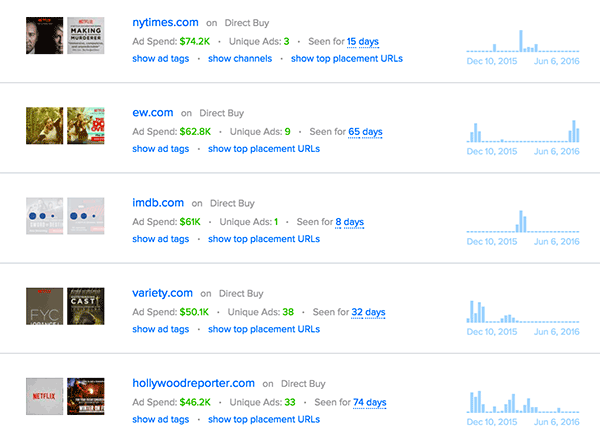 Netflix sends all of their traffic to landing pages that promote their original programming.

Hulu has spent an estimated $1,213,184 over the past 6 months. Most of Hulu’s ad spend is allocated towards Direct Buys. Hulu is also buying traffic on some lesser known networks like Radium One (a programmatic media buying service) and Mode Media.

Hulu’s ad creative strategy is similar to that of Netflix and Amazon. Almost all of their ads promote “Hulu Original” TV shows. 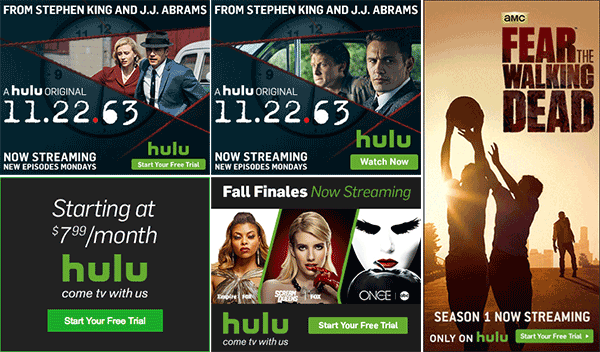 Hulu’s Direct Buys are a but more unorthodox than Amazon. You’ll see below that they buy traffic directly on Wikia.com, SomeECards.com, and Variety.com. 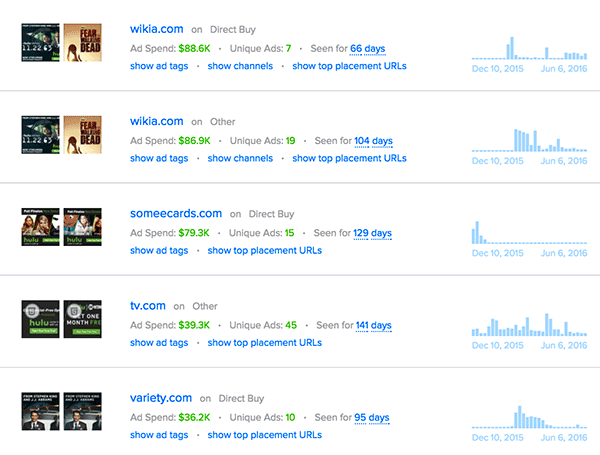 Hulu’s landing pages all promote their original programming, especially  11.22.63 and Fear of the Walking Dead.

Sling TV has spent an estimated $1,839,360 6 months. Most of that spend was allocated to the Google Display Network and Direct Buys. 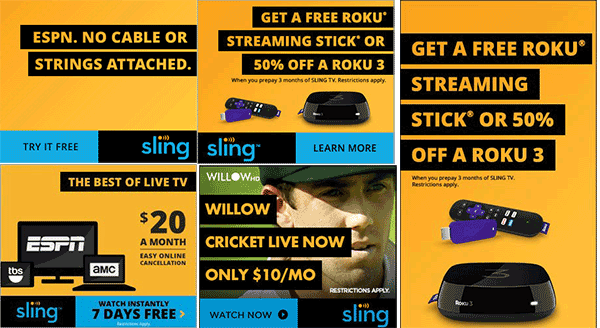 Sling TV allocates most of their ad spend to Direct Buys on Yidio. Yidio is a movie/TV search engine that crawls all of the streaming video services. 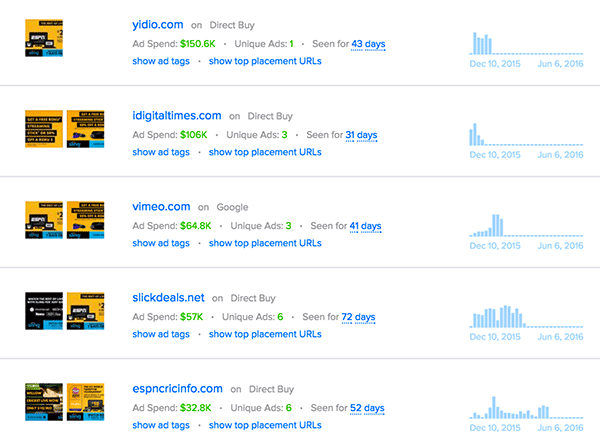 Sling TV uses long-form landing pages. You’ll see that all pages have large “hero” shots at the top, information and charts, and comparisons of their various options. Sling TV’s landing pages are much more detailed compared to Netflix, Amazon, or Hulu’s landing pages. 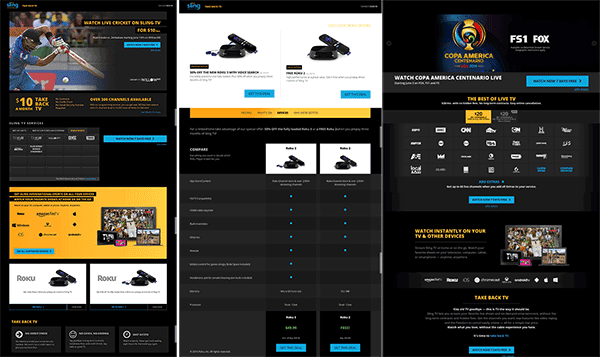 So far, it seems that Amazon is investing the most in their Display campaigns. This is most likely an effort to overthrow Netflix for the top spot. However, Hulu and Sling TV are not far behind. We’ll likely see an increased spend from all of these companies as things start to heat up over the 2nd half of 2016.