Men’s underwear is a billion dollar industry, and it’s on track to grow even bigger.

A recent Men’s Underwear Market Report predicts that “increasing numbers of metrosexual men in the U.S. [are] anticipated to fuel revenue growth of the boxer shorts segment during the period 2016-2026.”

With so much market growth on the horizon, we decided to do a deep-dive into how Mack Weldon, a popular men’s underwear maker, runs its display campaigns.  Last year, Mack Weldon made the news when they reportedly doubled underwear sales through podcast advertising.  This kind of marketing savvy makes them the perfect candidate for a post like this.

Here are our observations…. 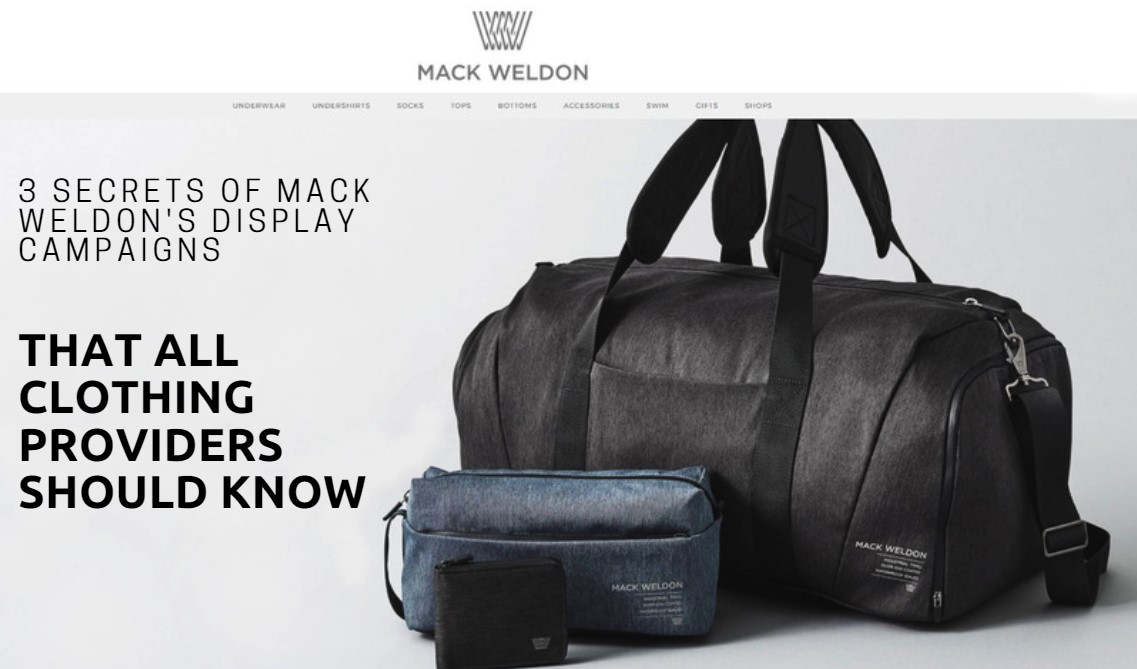 Don’t be Afraid to Go Native

Unlike a lot of other retailers, Mack Weldon focuses mainly on native advertising.

They’re definitely ahead of the curve.

“Native ads used to be used exclusively by digital publishers. E-commerce sites have only recently begun taking advantage of them, but some online stores rely on them more than any other platform,” states Ryan Kh, a digital marketing expert.

According to data from Adbeat, Mack Weldon has spent $7.9M on display ads over the past six months.

Adbeat is a tool that helps you find out everything about the display campaigns of your competitors. You can see how much money any company spends on advertising, which publishers it uses, and so forth. Try Adbeat for free right now!

Taboola and Outbrain are the guys that make those “sponsored content” and “recommended” widgets that you see on many websites.

Another thing to pay attention to is the gap between spending on Taboola and Google Display.  Mack Weldon is betting big on native advertising and judging by their sustained spend on these networks, it’s working well for them. 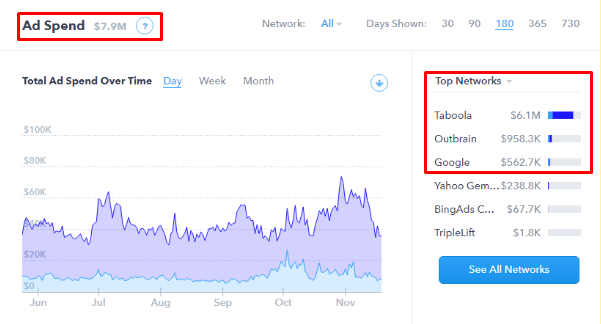 By contrast, Tommy John, Mack Weldon’s direct competitor, doesn’t seem to be doing much display at all.  Adbeat shows only very small spends on Google and Taboola. 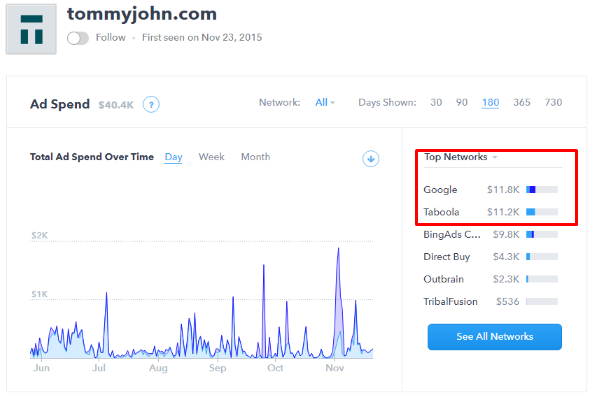 Jockey, another competitor seems to focus most of their ad spend on direct buys. 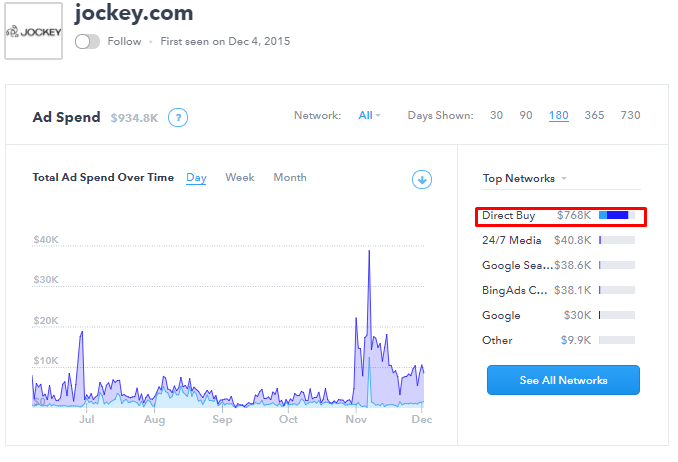 It’s tough to say why neither competitor is using much native advertising as part of their display strategy.  There definitely seems to be some opportunity here.  In fact, Mack Weldon recently began working more closely with Taboola to scale their native advertising even more.

When it Comes to Banners, Use Product Images That Appeal to the Most People

Yet, they only advertise two types of underwear in their banners: trunks and boxer briefs. 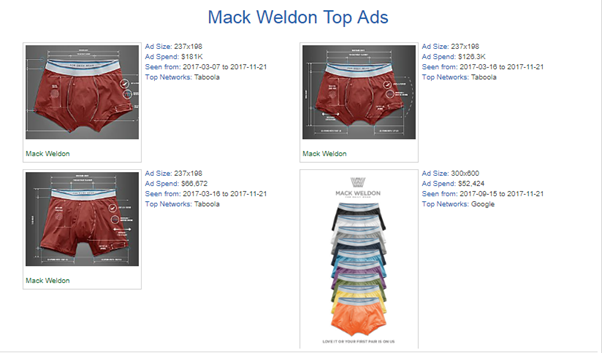 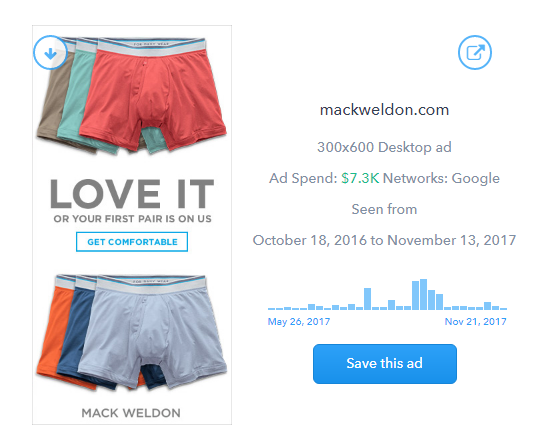 A Huffington Post/Ask Men underwear survey helps us understand why: boxer briefs are the most popular type of men’s underwear. 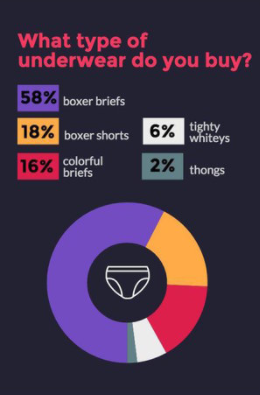 So what can we learn from this?

If you have a lot of products, use an image of the most popular and mainstream of them in your ads; those that most people prefer.

It pays to keep in mind that display advertising itself is being viewed by a large number of people.  You’re banners need to appeal to as many potential buyers as possible to give you the best shot at success.

Taboola has a good post on landing page best practices where they recommend your page should “inform first, sell second”.  Mack Weldon’s landing page does just that.

Like most landing pages designed to receive traffic from content discovery networks, it’s formatted as an article that lists the advantages of the company’s underwear.  After teaching users about the thought and quality that goes into every piece, they follow up with some impressive stats to build trust, like: “With over 1.5 million shipped and less than 2% returned – they did something right.”

One of the most distinctive features of this landing page is that it doesn’t attempt to sell anything; at least, not directly.  Instead the purpose of the page is to smoothly lead the user to the next page where goods are offered for sale.

Notice, the CTA button is located at the bottom of the page (just as the Taboola article recommends).

Neil Patel would approve.  He believes that users prefer to learn about the offer before clicking on the CTA.  “Make sure your visitors know what they are getting before you present them with a call to action,” says Patel.

For comparison, here’s what you see as soon as you visit Tommy John’s landing page.

And as for Nike, they literally drop you into their online store product listings and prices. 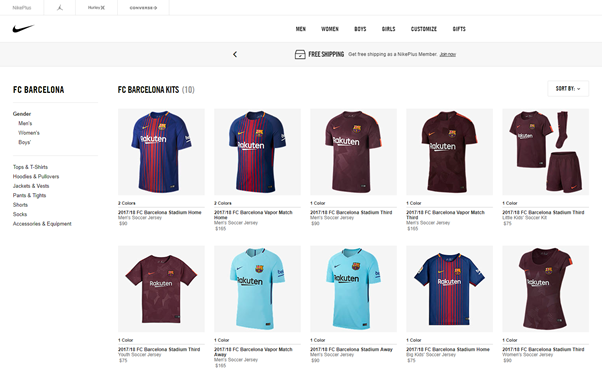 From a design point of view, Mack Weldon’s page is minimalistic. Black text is clearly visible on a light background, and the blocks of text are arranged sequentially one after the other. This makes it pleasant for the reader and removes the element of “congestion” that is inherent in the pages of some other companies.

Statistics say that the U.S. men’s underwear market is expected to reach nearly $6B by 2026.  From what we can see, Mack Weldon is the dominant display advertiser in the space and they’re doing a few key things to stay on top.

Here are a few lessons from their campaigns that you can apply to your own:

–       Try to use native ads even if this type of ad is not typical of your industry.

–       Use images of your most mass-oriented products in banners, because display advertising is focused on a very wide audience.

Do you have any interesting or unusual observations regarding display ads? Have you had any good or bad experiences with native advertising?