The Power of Celebrity in Display Advertising Part 1: Donald Trump

Imagine that you’re a personal trainer and you want to make the most money possible.

You’re given the choice between:

a) a photo of you training Britney Spears, or
b) a degree in nutrition/training from the top university in the United States

Which would you choose?

I’m taking the picture of Britney Spears any day of the week.

Because it’s going to lead to more clients! Most people would rather be trained by the guru trainer to the stars than Joe Schmoe with a bunch of letters after his name.

We grossly underestimate the raw marketing power that celebrities have.

For years, companies like Weight Watchers, Guthy-Renker (Proactiv), and Bowflex have understood the influence that celebrities have over the general public’s buying decisions.

All of these companies blatantly use celebrities…

And you should, too.

However, not everyone has the luck (or pocketbook) to attain a celebrity endorsement.

(Guthy-Renker pays an estimated $15 million/year to all of their celebrities.)

However, there’s a simpler, more cost-effective way to piggyback off of celebrities.

Even better, you can use this strategy to write better ad creatives, landing pages, and overall marketing messages for your Display campaigns.

In this blog series, we’re going to show you how some of the savviest advertisers are using celebrities to drive more clicks, leads, and sales in their Display campaigns.

And in today’s post, we’ll start off with who might be the most controversial celebrity-turned-politician at the moment… 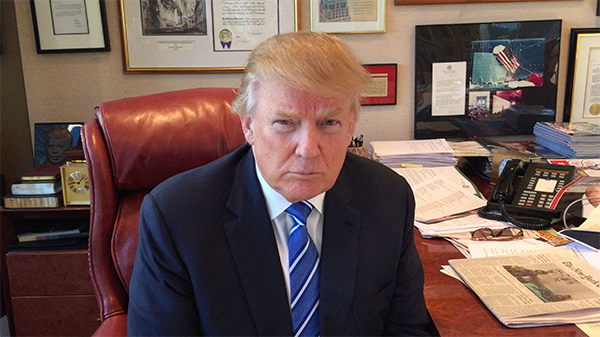 The 2016 election might go down as the most controversial in US history.

However, very few people are talking about Hillary Clinton. It’s all Donald.

Love him or hate him, most people find him more entertaining to read about than Hillary. And that fact holds true if you look at the number of advertisers who use Trump in their ads.

We searched all of the ad creatives in the Adbeat database for the keyword “Trump” and also for the keyword “hillary” (we could use “clinton” but she’s almost always referred to as “Hillary” in the media). What we found was astounding.

Take a look at just a small sample of the results: 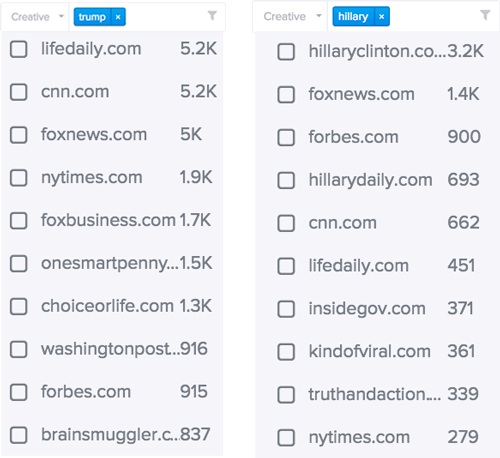 There is a MASSIVE difference.

Moreover, while most of the advertisers you’ll see on each list are new sites, there are advertisers from multiple markets and niches that found a way to fit Trump into their Display strategy.

Let’s see how they are doing it.

“Who Would YOU Vote For?”

We’re written before about why people love polls and quizzes.

Newsmax (a conservative news publisher) is driving a large amount of traffic to their site with these ad creatives:

Once a prospect submits, they are sent to a page that shows the results of the poll. Then, they’ll start to see news and offers from Newsmax pop up in their email inbox. These emails may or may not be Trump-related, but Trump has already done his job of getting them to opt-in.

Notice that Newsmax did not run ads featuring Ted Cruz or John Kasich.

Political views aside, Ted Cruz and John Kasich are just not as newsworthy as Trump. They don’t have his celebrity power.

But Newsmax isn’t the only advertiser running poll/quiz ads.

The Sound Money Defense League is an organization focused on “restoring gold and silver to its historic role as America’s constitutional money”. In a nutshell, they want the USA to return to the gold standard. 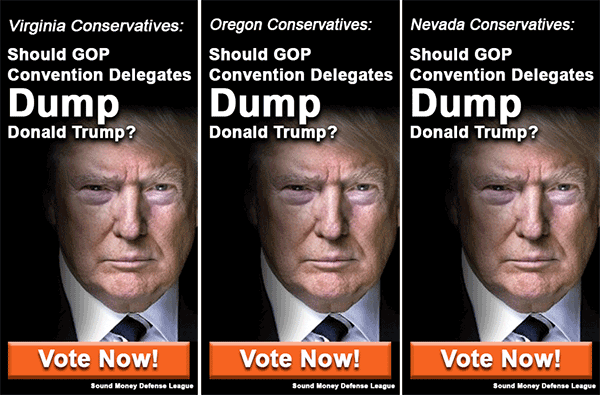 You’ll notice that all of these ads and their corresponding landing pages are geo-targeted (“Urgent OR Conservative Voter Poll”): 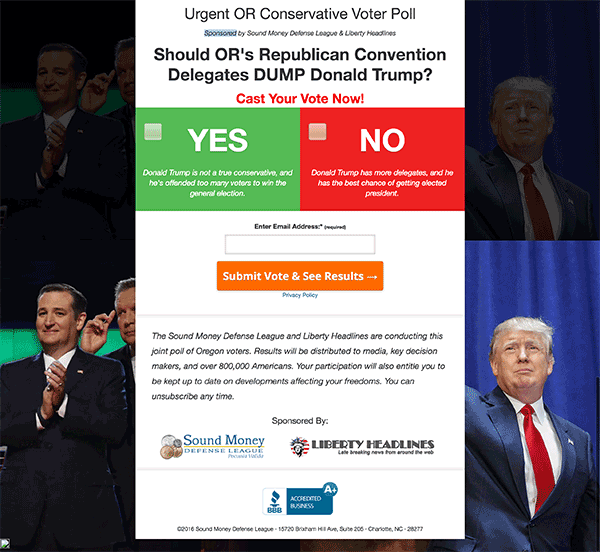 After you submit your email, you’re shown a pop-up with the results of the poll:

And then you are invited to become a “founding member” of the Sound Money Defense League: 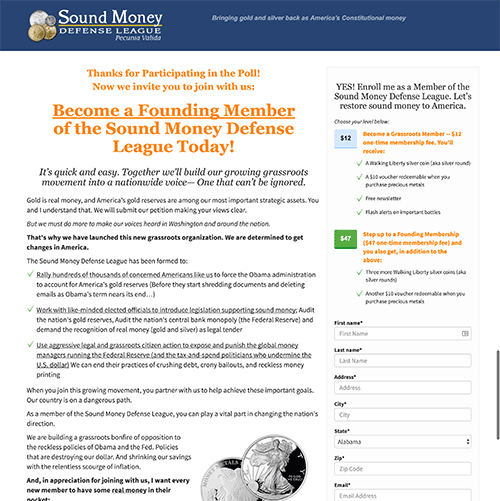 This is a very clever way of using celebrity to fit the psychographics and political views of your prospects.

But that’s not all.

Lead generation advertisers are also using Trump in their ads by picking out a few relevant soundbites and using them in their landing page copy.

For example, check out these two Donald Trump ads…

Both of these ads drive traffic to this advertorial: 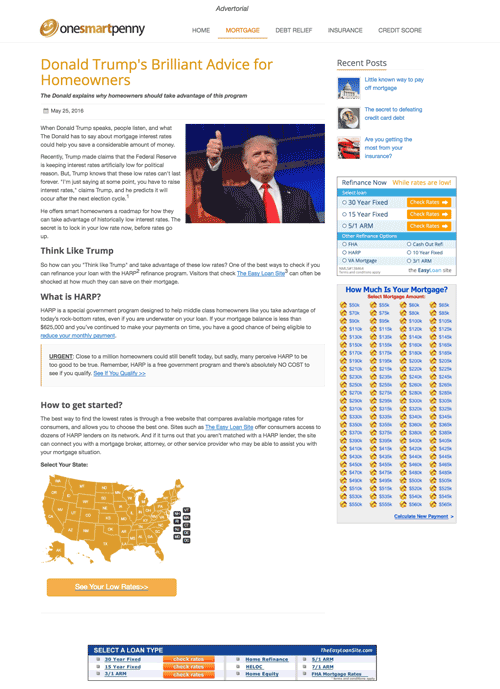 This advertorial includes a quote from an interview Trump did with Bloomberg TV, where he said, “I’m just saying that at some point they’ll have to raise interest rates”.  This is a very clever way of using celebrity “advice” in your marketing materials.

Trump was a celebrity long before he became a presidential candidate. While he was never as famous as Justin Bieber (at least not yet), most people knew about him from the TV show celebrity apprentice, his numerous wives, children, and interesting personal life.

All of this can be used for fodder for viral articles, especially now that he’s a celebrity politician.

You’ve probably seen the ads below. Many of them are all over the place. There are numerous viral content sites who are promoting articles related to Trump, his children, his wives, ex-wives, and all of the crazy stuff he owns.

Here are just a few of them: 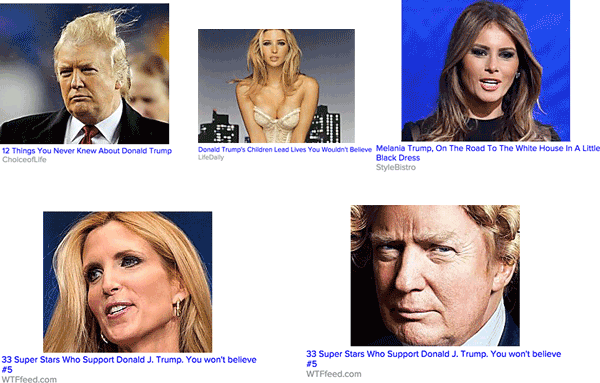 Alos, as you saw earlier, not just viral sites promote Trump-related content. Many mainstream news sources like CNN, The New York Times, and Fox News use Trump in their ads:

There’s no doubt that Trump is one of the most talked about celebs at the moment. Using the strategies above as inspiration, you can use his likeness (or another celebrity more relevant to your market) to see better results with your Display campaigns. Over the next few weeks, we’ll be publishing a few more blog posts that show advertisers using other celebrities as a way to drive more traffic. Stay tuned.