Formerly known as Dapulse, Monday.com is a team management platform that was founded in 2012 by Roy Mann (former C-level Executive at Wix) and Eran Zinman (former R&D Manager at Conduit Mobile). Based in Tel Aviv, Israel, the company raised a $1.5 million in a seed funding round to build a “next-generation” collaboration tool that allows you to create tasks, share files, plan workloads, and ultimately, visualize projects and processes that your team is collectively working on.

Aside from word-of-mouth, Monday’com’s initial growth was a direct result of hyper-targeting their target audience across social channels like Facebook and Instagram. In order to maximize their success, the company leveraged Facebook’s lookalike feature to upload a pixel of their existing customer database, in an attempt to find more people with similar personas.

“Unlike the traditional B2B approach, [where we] target conventional decision-makers like CEOs and senior managers, [Monday.com] did something different and created a direct response advertising funnel,” explains Rotem Shay, Adwords Team Leader responsible for performance marketing campaigns on Facebook and Instagram. “Our target decision-maker [was] basically anyone [with] a computer [who] works with a team. Some might say that we hacked B2B to become B2C, but I say that our marketing approach has always been H2H—human to human.”

After bagging $25 million in a Series B (2017) led by Venture partners, the company decided to move beyond Facebook, and ramp up their Adwords by targeting specific industries and verticals. In fact, 70% of their users came from the non-tech sector, like, construction, wedding planners, breweries, and even churches, amongst others. Since Monday.com is available in several different languages, the campaigns were tailored to reach prospects outside of the English-speaking market.

Around the same time, the company also changed their name to Monday.com from Dapulse, that was “a big part of a maturity phase” according to Mann. “For billions of people all around the world, Monday means work. All that is good, all that is hard, and all that is real about work,” he wrote on the company’s blog. They even released a fun, light-hearted video announcing the rebranding, where they poked fun at their “dead name” and went over the unusual, yet hilarious reactions they’ve received for the same since inception.

In 2018, Monday.com raised $50 million in a Series C funding round led by NYC-based growth equity firm, Stripes Group, that has previously invested in other well-known brands such as Blue Apron, Refinery29, GrubHub, and Flatiron Health. Valued at $500 million, the company also claimed to have tripled their customer base to 35,000 companies since the previous year by roping in big-names like Carlsberg, AT&T, WeWork, Discovery Channel, and McDonald’s. Monday.com also invested in relatable, but, informative video campaigns that were featured in YouTube’s list of Top 10 True View for Action ads for garnering one of the highest reach, clicks, and engagements.

As of 2019, the company is focusing on introducing transformative features to their product that’s being actively used by 35,000 paying teams across more than 200 verticals. Let’s take a closer look at their advertising strategy, including their ad spend, creatives, publishers and landing pages, that has largely contributed to their consistent growth:


Ad Spend and Ad Networks
In the last six months, Monday.com has spent $12M on online advertising, out of which, the majority went towards Direct Buy ($8.3M), Google ($2.1), and Youtube ($1M). Additionally, they’ve also invested in the native advertising platforms like Outbrain ($418.5K) and Google Native ($108.9K). 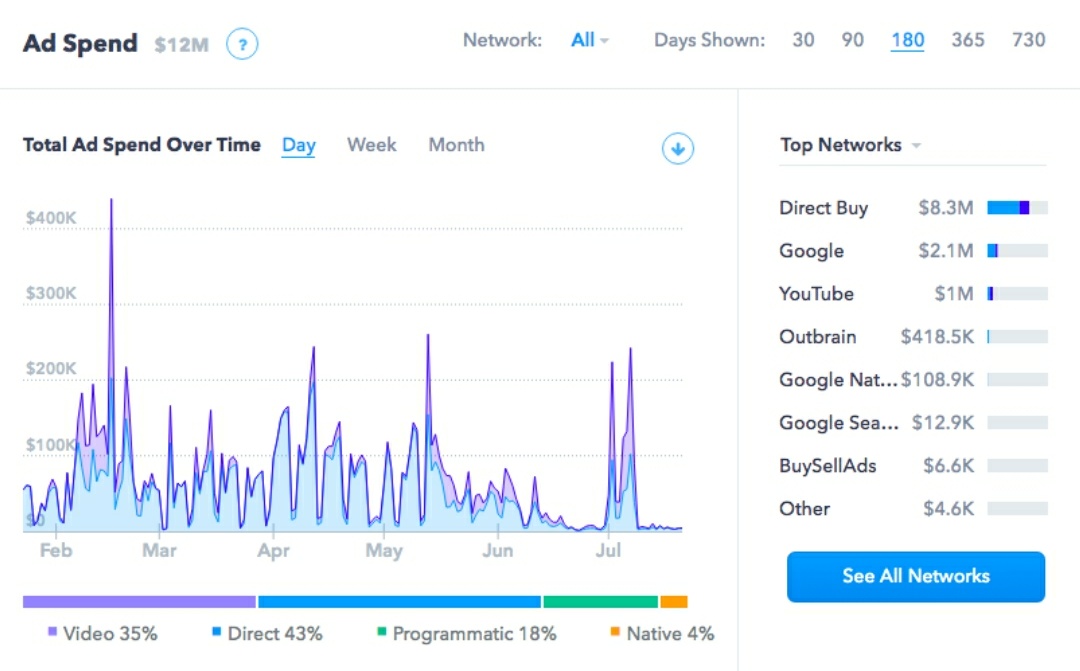 While Asana, and Trello—Monday.com’s direct competitors in the project management space—also spend most of their advertising budget on Direct Buy and Google, none of them seem to be very keen on experimenting with large-scale video campaigns. Given that 92% of B2B prospects with a high purchasing intent tend to consume online video content on the daily, it’s important for brands everywhere to make video an integral part of their overall marketing strategy. Even the biggest names in the marketplace, like eBay and Amazon, discovered that when they use a video ad to highlight specific USPs of a product, the conversion rate is likely to increase by 35 percent.

On a related note, videos, alongside native and display ads, drive immediate conversions on desktop—which explains why most of Monday.com’s campaigns are geared towards desktop users.

Lastly, instead of putting all their eggs in one basket, the company boasts of a pretty diverse campaign portfolio.  Out of their total ad spend, 35% goes towards video, whereas, the remaining is reserved for running direct (43%), programmatic (18%) and native (4%) ads.

Publishers
Monday.com’s primary publishers have remained the same over the past year, with most of their ad spend going to Youtube ($4.2M), Spanishdict ($1.2M), DailyMail ($532.4K), and Dictionary.com ($141.9K)). Urban Dictionary ($151.9K) has been a new addition to the top five tally in the last 6 months, replacing CNN.

As for the other publishers, Monday.com ads don’t follow a fixed pattern—which means that they appear on arbitrary landing pages that aren’t relevant to their product. For example, on Spanishdict, the ads were shown to people looking to translate common phrases like, what you’re drinking, gracias por aceptar mi solicitud, happy birthday or antes de comer. Similarly, on DailyMail, the ads can be found on celebrity news updates about Hailey Baldwin, Johnny Depp, Kate Middleton, Rachel Weisz, and so on.

One can assume that these pages are either expected to get a lot of organic attention or are promoted well and often by the publishers.

Overall, we can conclude that Monday.com has been actively advertising with publishers (and pages) that get a significant amount of traction every month to ensure that their ads are shown to as many people as possible. While they did admit to using targeting parameters in their paid social media campaigns to attract the right people, it’s unclear if they’re doing the same for other ads.

Creatives
As we discussed earlier, Monday.com heavily uses video to promote their services—as a result, 65% of their creatives are video, followed by images (21%), text/image (12%) and text-only (2%). 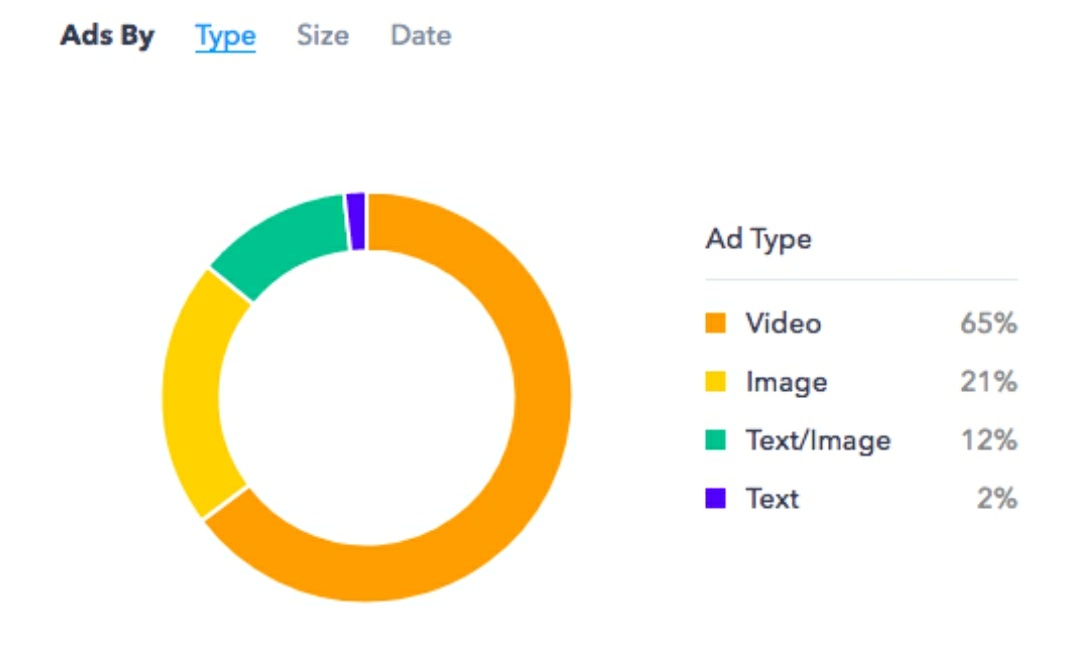 From the outset, the following ad clearly didn’t have a million-dollar budget, however,by striking a balance between being informative and being creative, the company is able to channel their awareness of the market into how people consume video content. The 30-second segment starts with a short sketch about how their product—with its easy organization and user-friendliness—contributes to the daily team victories.

Think of the satisfaction you get from throwing a paper ball into the trashcan on your first try, or peeling the protective sticker off of a phone. That’s what using Monday.com feels like.

Another video features an existing user of Monday.com, who outlines the ways using the product has helped their brand and what makes it different from other project management tools out there. Using customer testimonials as a “trust signal” can be powerfully persuasive for prospects—after all, you’re more likely to purchase a product that has received positive feedback, and glowing recommendations from “real” people.

In late 2018, after Monday.com unveiled their NYC office, the company ran a series of humorous, and whimsical ads with an attention-grabbing tagline—”Manage Anything. Even New York”. The creative implores viewers to “win a championship” or “stamp out crime” using Monday.com because it’s actually just that simple. 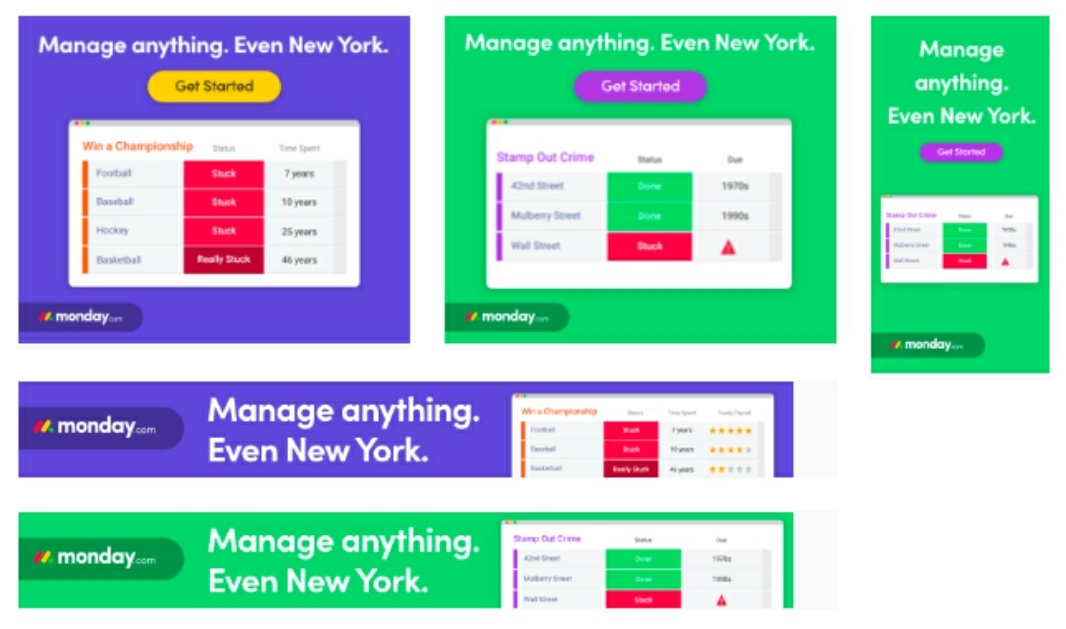 Overall, their graphic and visual language has undergone a significant change over the last year to showcase how simple it actually is to use Monday.com.

“From the start, we’ve marketed our product directly to anybody and everybody—not as enterprise software to be adopted by the CEO, but as a tool that anyone can use,” says Guy Levin, the UI/UX designer at Monday.com, “I started building an illustration bank of characters that reflect the diversity of people who use our product. While we do have a lot of corporate “suit-and-tie” types who use our product, many of our customers are much more casual. They work from home, on-the-go, out in the field, and we wanted our illustrations to reflect that.”


As a result, they incorporated tight color palettes, straightforward compositions, and simple shapes to bring a certain playfulness and emotion to the difficulties that everyone faces at work. In order to communicate their marketing message more clearly, the creatives rely on vibrant hues and tonal contrast to keep a clear focus on the foreground.

Landing Pages
In addition to constantly optimizing their campaigns for maximum success, Monday.com has created a cohesive customer experience for anyone who clicks on their ads and lands on their homepage. 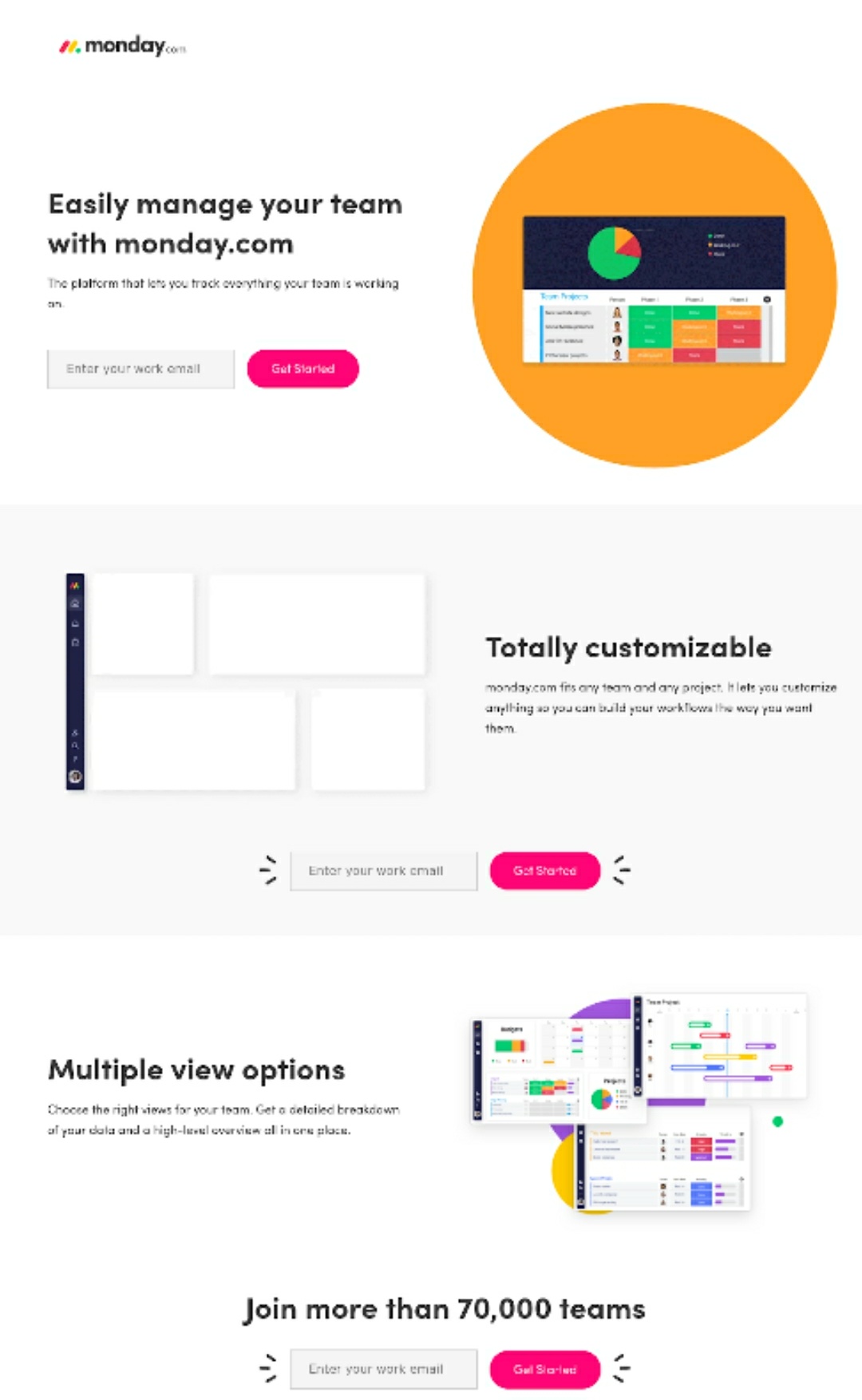 Unlike a lot of brands that rely on cheesy stock images, their homepage welcomes you with custom-designed graphics that visually communicate the wide range of problems that the project management tool is trying to solve. The copy is short, engaging and is reflective of what Monday.com is all about: simplicity and humanity.

The one-field form (that requests for your email address) makes it clear that you don’t have to jump through hoops to start using the product—and can dive right in with just your email. Not only this, the company also ensures that a customer’s first experience with the product caters to their specific needs—for example, if someone signs up on the platform looking for a Gantt chart, then, they’re directly introduced to Monday.com’s timeline. 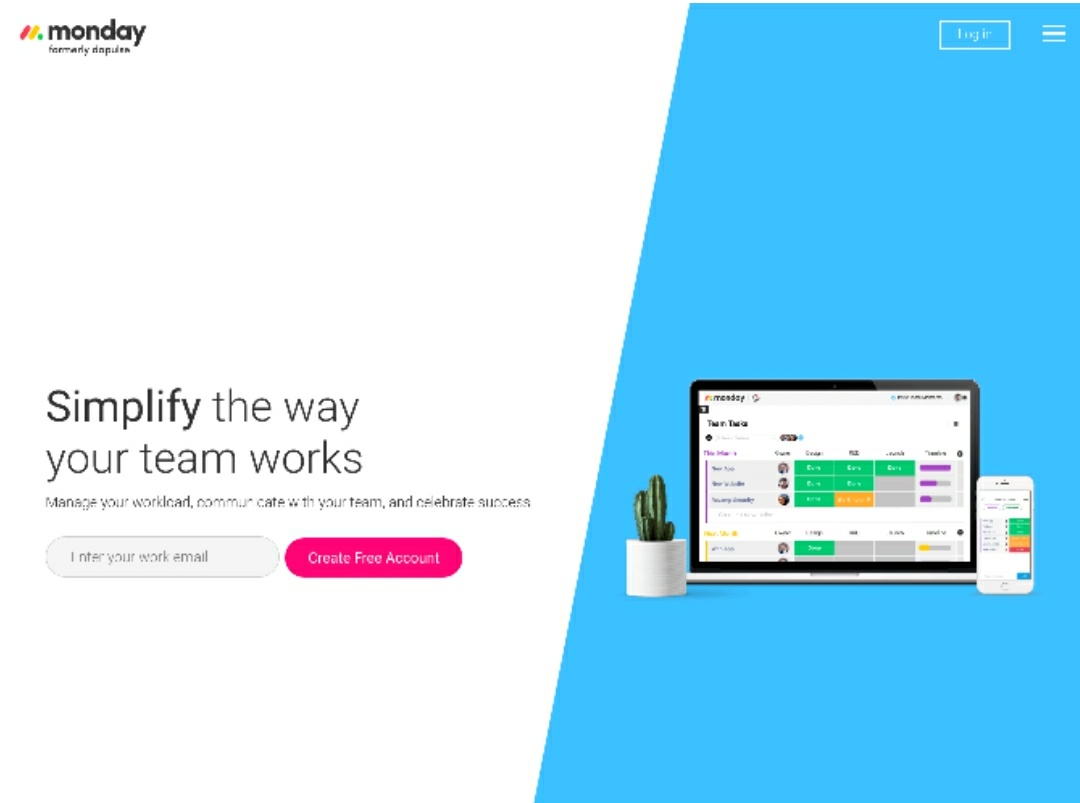 On further scrolling, you can spot trust signals (that we discussed previously), like the brands currently using Monday.com to collaborate with their teams, and featured testimonials from their business owners. The multiple CTAs on the homepage are a nice touch, as they’re known to increase conversions by 20 percent, according to an invespcro study.

Conclusion
Despite being in the market for only 7 years, Monday.com has managed to establish themselves in an extremely competitive landscape by improving their product and refining their advertising strategy, in order to consistently attract more customers. Instead of limiting themselves to a certain ad-type, they’ve been experimenting with several different ones to engage with customers and ultimately, figure out what works the best for them. Not to mention that they have plenty of room to play around, given that the company’s “target market is anyone who has a team and works with a computer”.