In 2012, Matt Salzberg, Ilia Papas, and Matt Wadiak founded Blue Apron, a cost-effective way for people to easily prepare meals without needing to scour the aisles of their supermarket looking for every single ingredient in a complex recipe.

They began beta testing the product by sending their pre-assembled meal kits to friends.

It has also raised over $193.8M in venture capital and is currently valued at over $2B dollars.

Now, Blue Apron might be one of the most successful meal kit services, but they certainly aren’t alone.

There are many other players in the meal-kit delivery game.

They all differ in the way they market themselves. However, they do have one thing in common:

They spend millions on display advertising to promote their services.

Admittedly, the meal delivery market might not be the sexiest business out there. But these advertisers certainly know what they are doing, especially when it comes to advertising on native ad networks. They are a great example on how advertisers outside of direct-response and ad arbitrage markets can effectively use native ads to drive sales

In today’s blog post, you’re going to see the display strategies for four of the largest meal delivery services.

And it all starts with the “grand daddy” of them all… 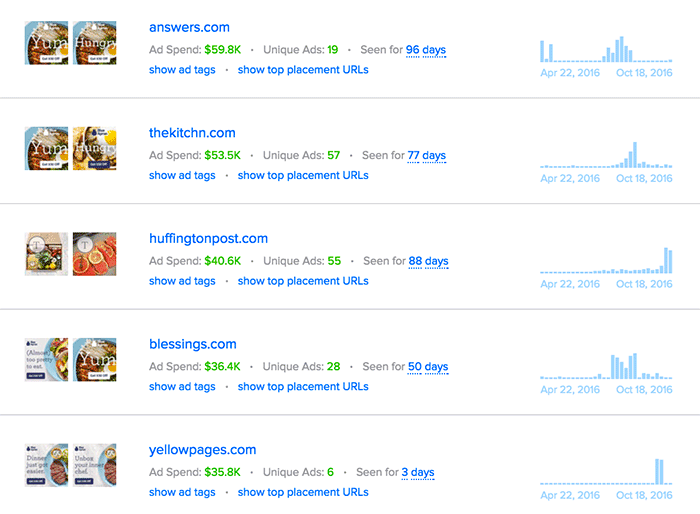 It might seem strange that BlueApron buys inventory on Answers.com. However, it makes perfect sense if you look at the specific pages where its ads are shown:

As the saying goes, “we eat with our eyes.” Food presentation has a lot to do with how we perceive the food that we eat. All of Blue Apron’s standard ad creatives include images of delicious meals. It’s almost impossible for a hungry person not to click on one of these ads: 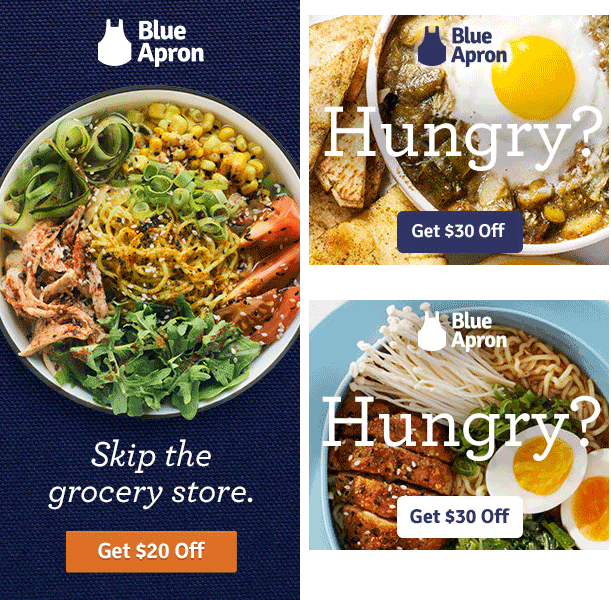 As we’ve written before, bold and bright colors work really well in ad creatives. Most of the meal kit advertisers understand and take advantage of this concept.

Blue Apron’s native ads also have pictures of food, but they are less “succulent.” Instead, they’re designed to look somewhat strange in order to catch your eye:

Does the ad headline ring a bell?

The headline is a toned down version of the “you won’t believe what happened next” style of ads that were popular on Facebook a few years ago. “Clickbait” headlines work really well on native ads.

Blue Apron is split testing a variety of different advertorials on native. Not only are they testing copy, but they are testing different landing page designs with the same copy.

Here is the first set of landing pages all based on the concept  “the one thing you need to cook a perfect dinner”: 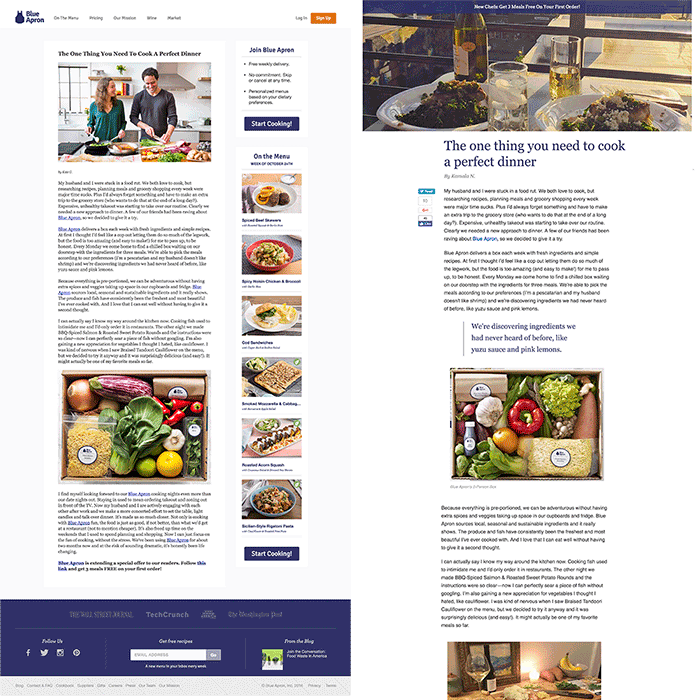 Blue Apron also tests the two landing page designs above with a different copy angle, “How This DIY Meal Kit Changed My Life”: 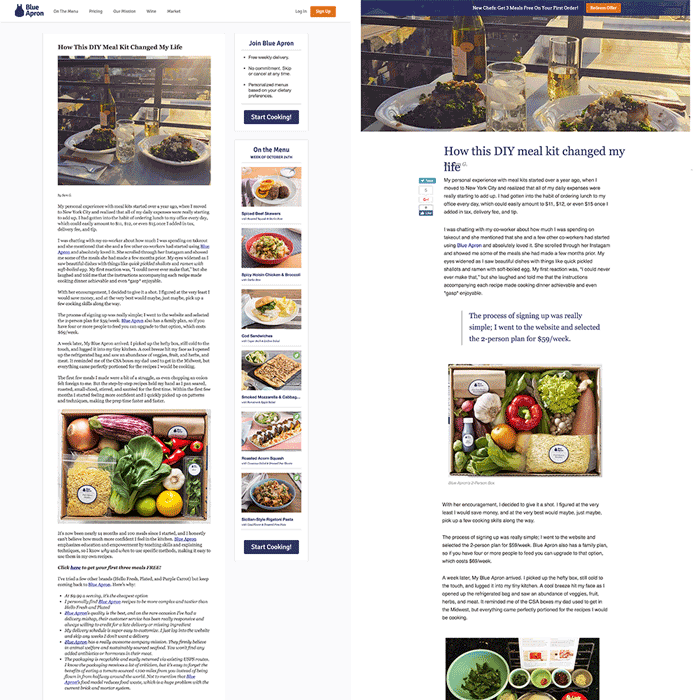 Blue Apron has also started testing new ads and landing pages that focus on the amount of money customers can save when they buy a meal through Blue Apron instead of all of the ingredients at their supermarket:

The other advertisers featured in this post also use the “save money” angle. You’ll probably see Blue Apron ramping up their spend for these campaigns in the near future.

HelloFresh was founded in December 2011 by Thomas Griesel, Dominik Richter and Jessica Nilsson. It has raised an estimated $275.5M in venture capital.

It is the third biggest advertiser in this blog post. It has spent an estimated $2,301,440 on desktop ads and $372,032 on mobile ads over the past six months. Most of its ad spend has been allocated to Taboola and Outbrain:

HelloFresh’s publisher selection is fairly straightforward. It spends the most on publishers that are related to food and recipes: 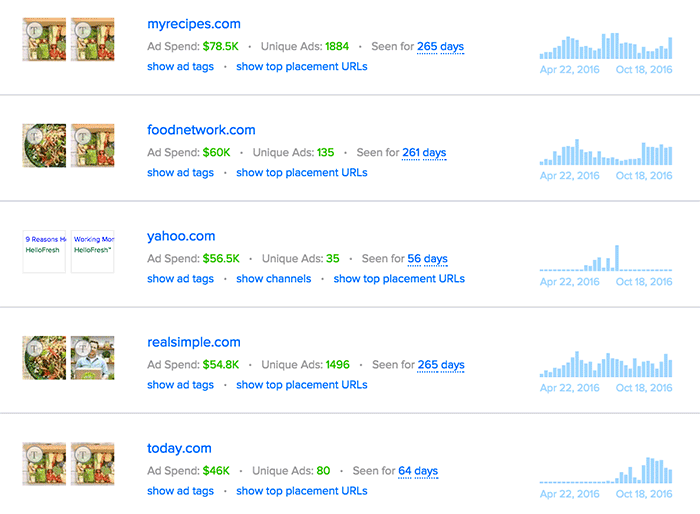 HelloFresh’s standard display ads show boxes with a bunch of ingredients. Many of these other advertisers in this post use this type of imagery as well. It also uses a “Get $35 Off” coupon pitch as a call-to-action. 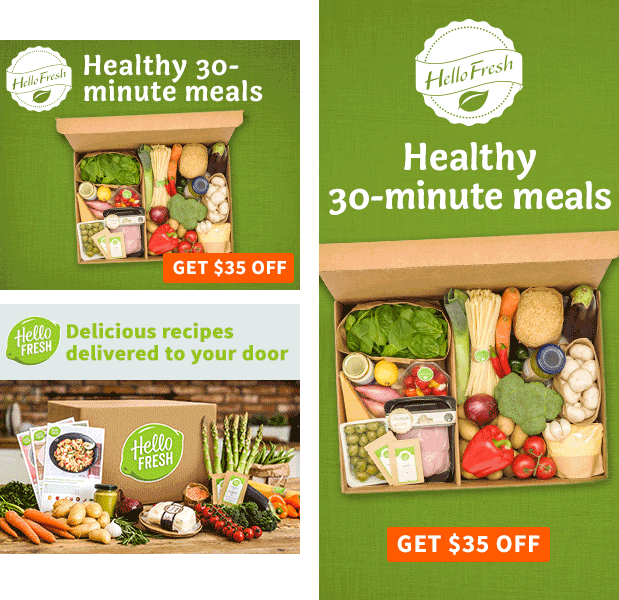 The headline “changing the way people cook at home” is also similar to headlines that have been used by other native advertisers like Harry’s.

HelloFresh also uses a long-form landing page with a lot of bright, bold images and an explanation of how the service works. They also use authority in the form of Jamie Oliver, a famous chef that has prepared many of the recipes that HelloFresh sends to customers:

HelloFresh is also testing out a shorter page: 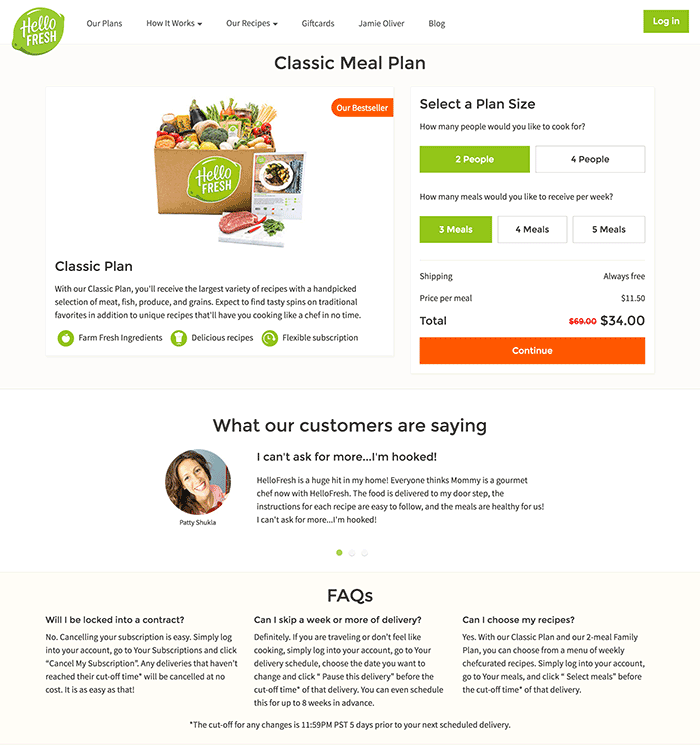 You can think of this page as a “product page.” This is the type of landing page that many eCommerce advertisers send traffic to.

The first native landing page is a mini-story about a working mother named Nicole who was having issues paying her grocery bills. The article goes on to explain how HelloFresh made her life easier and made shopping for her family more affordable.

The moral of the story is that people love stories, and even a simple story like the one below can and does work on native:

The second native landing page HelloFresh uses is a list of three reasons why you’ll love them: 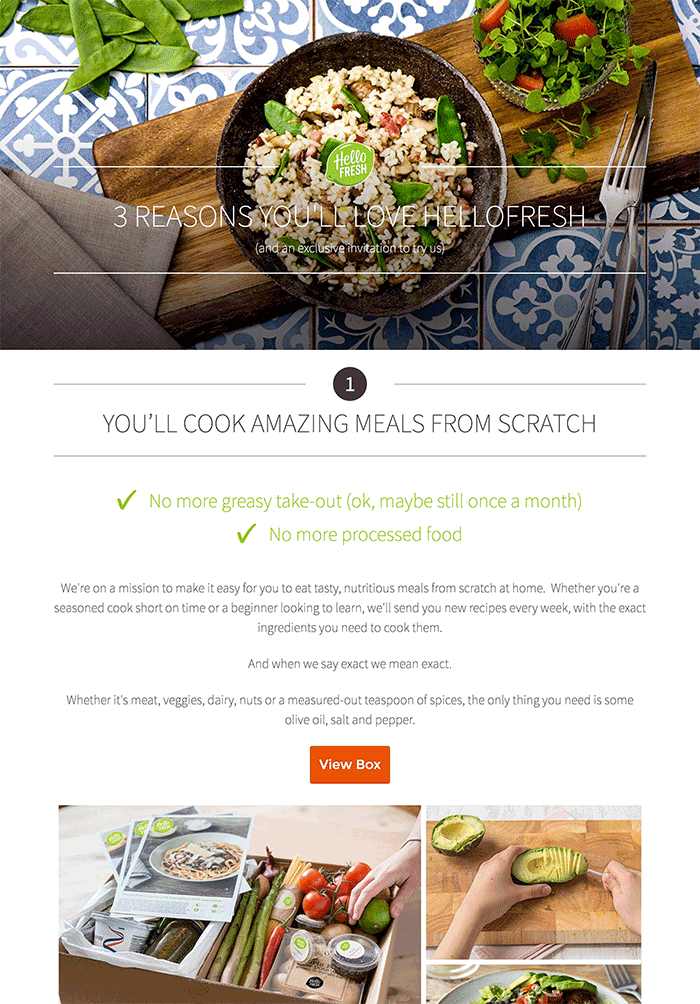 The third style of landing page is an even longer list (9 instead of 3) of reasons why someone should use HelloFresh: 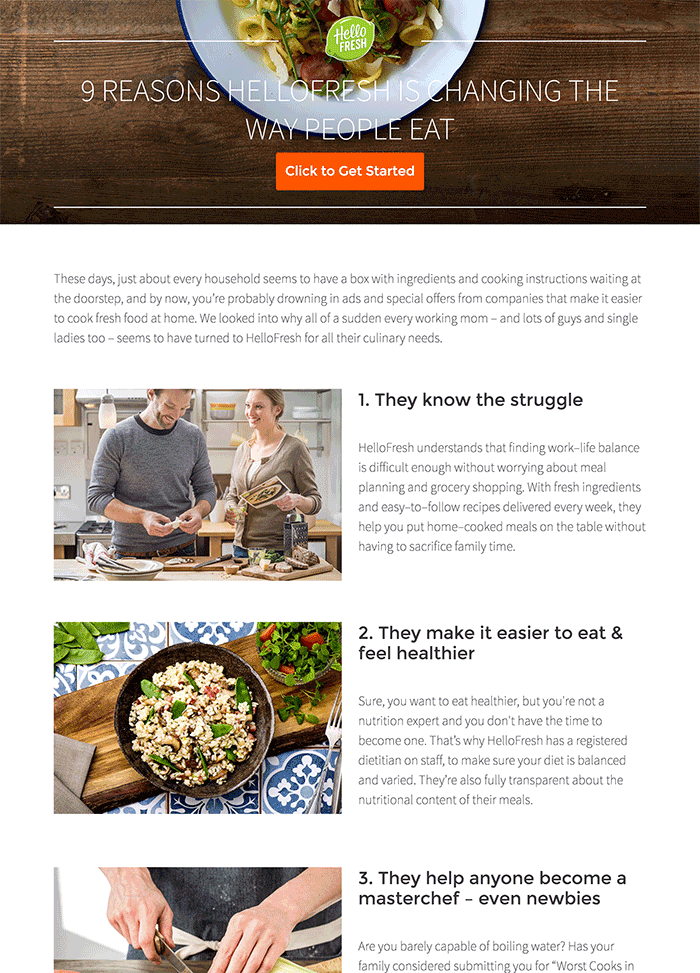 Home Chef was founded in 2013 by Bryon Finke and Pat Vihtelic. It has raised an estimated $57M in venture capital.

Home Chef has spent an estimated $2,075,392 on desktop advertising and has spent roughly double that on mobile advertising for an estimated $4,004,352. Home Chef allocates the majority of their ad spend to the “big 3” native networks: Taboola, Outbrain, and Revcontent. They have significantly ramped up their spending as of the middle of September 2016, especially for ads being shown on mobile devices:

Home Chef allocates most of their ad spend to fairly general publishers that have nothing to do with food. As they have ramped up their spend exponentially since September, they are likely going after more general sites that get a ton of traffic: 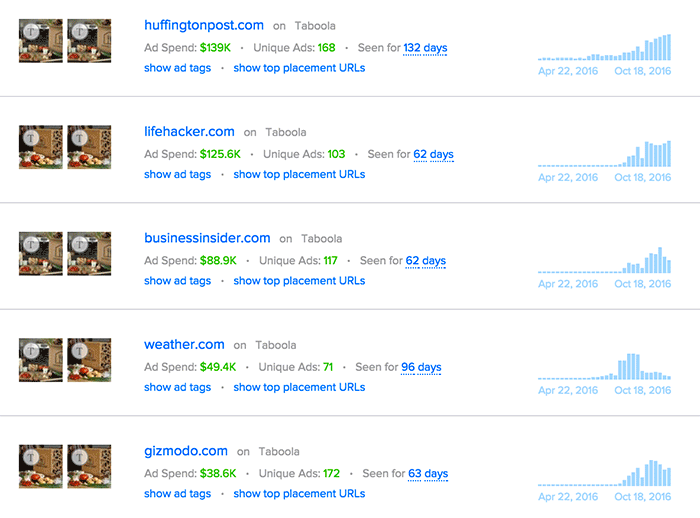 Home Chef is using a mixture of different images in their standard ad creatives. This includes boxes that contain foods, nice pictures of food on plates, and even someone chopping a tomato. It also uses a call-to-action coupon: 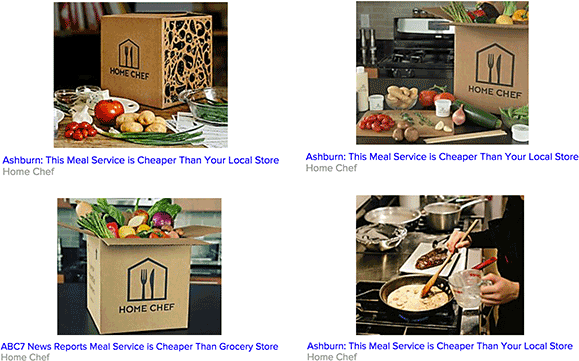 Home Chef uses a landing page that gives a three-point summary of how the service works. This list up is followed up with a call-to-action to get started. It’s fairly simple. 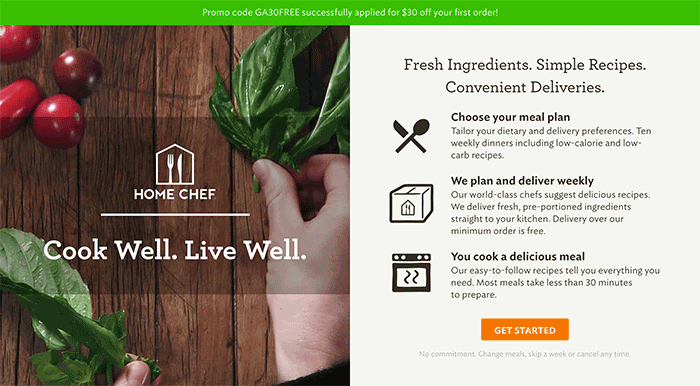 Home Chef was featured during an ABC7 news segment. It uses this as social proof and authority on many of its pages: 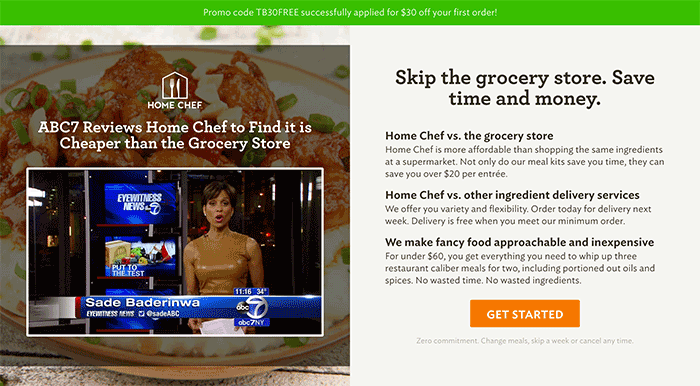 Many people trust and even feel a bond with their local news anchors. Therefore a local news celebrity reviewing Home Chef and proving that it can be cheaper than your grocery store is 10x more powerful than Home Chef making the claim.

Home Chef’s second native page is a slightly different version of the first page. This page doesn’t contain the video or the three-point bullet list. It is formatted as an article with specific charts and graphs that list the actual costs for the ingredients that are found in the Home Chef kit vs. buying each ingredient separately at your grocery store: 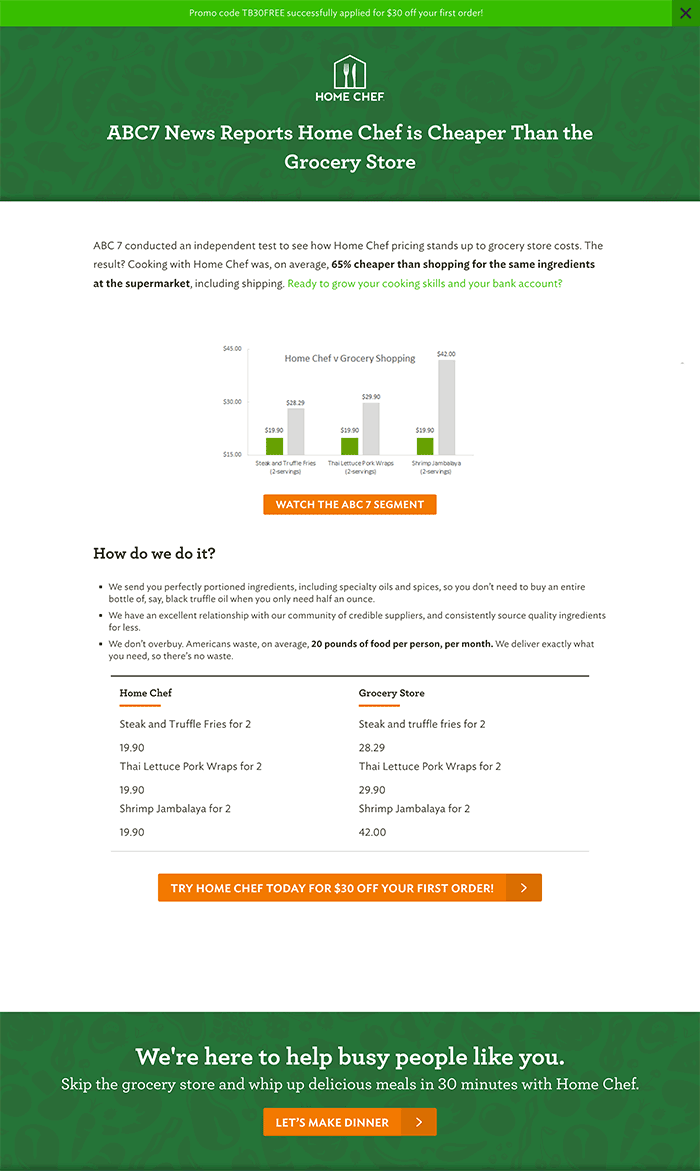 GreenChef was founded in 2014 by Ling Xiao, Michael Joseph, and Dan Yue. It has raised an estimated $15.5M in venture capital. GreenChef is a bit different than the other advertisers in this post. Its marketing strategy focuses on the fact that all ingredients in its meal kits are organic.

GreenChef has spent an estimated $32,792 on desktop advertising and $23,668 on mobile advertising. The majority of its ad spend is allocated to Lockerdome (native) and Google.

GreenChef spends the most on Mindbodygreen.com, a  health and wellness blog. It  has also bought inventory directly from 247sports.com, a professional sports news website. 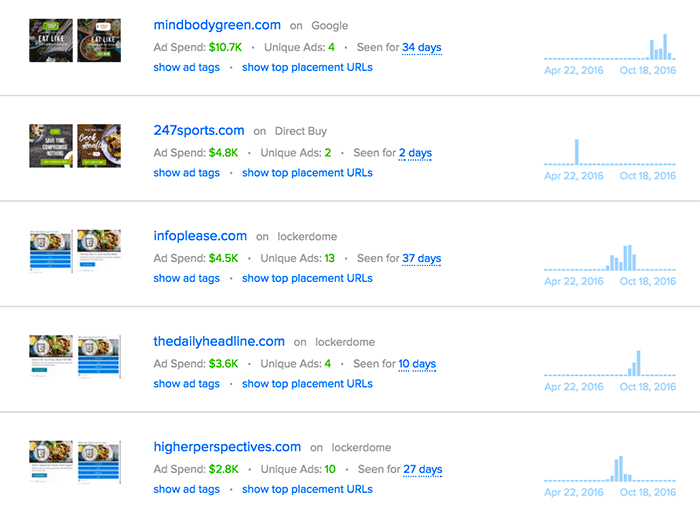 GreenChef uses an interesting headline/tagline in its ads: “Eat like a grown-up again.”

It’s tough to tell if that angle is working for them on display.

The ad doesn’t say much about the service works, but rather tells people to stop eating like children.

One very interesting aspect is its use of logos in ads, specifically the “USDA Organic” logo. This provides authority. 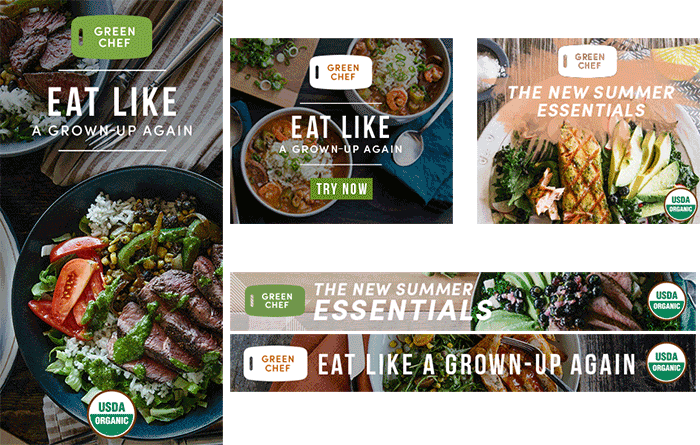 GreenChef uses Lockerdome’s interactive ads for the majority of its campaigns. The ads allow users to select the type of diet food that they are looking for – vegan, vegetarian, paleo, etc. Most of the ads are focused on the most fashionable diets currently in the USA:

(Note: One interesting thing to test would be to place ads for a specific diet type [paleo, for example] on publishers/placements that are related to the paleo diet. But we’ve yet to see any of these advertisers test this strategy.)

GreenChef uses a long-form page that is similar to the style of landing page that Blue Apron and HelloFresh are using:

The first introduces potential customers to their produce buyer, Brittany: 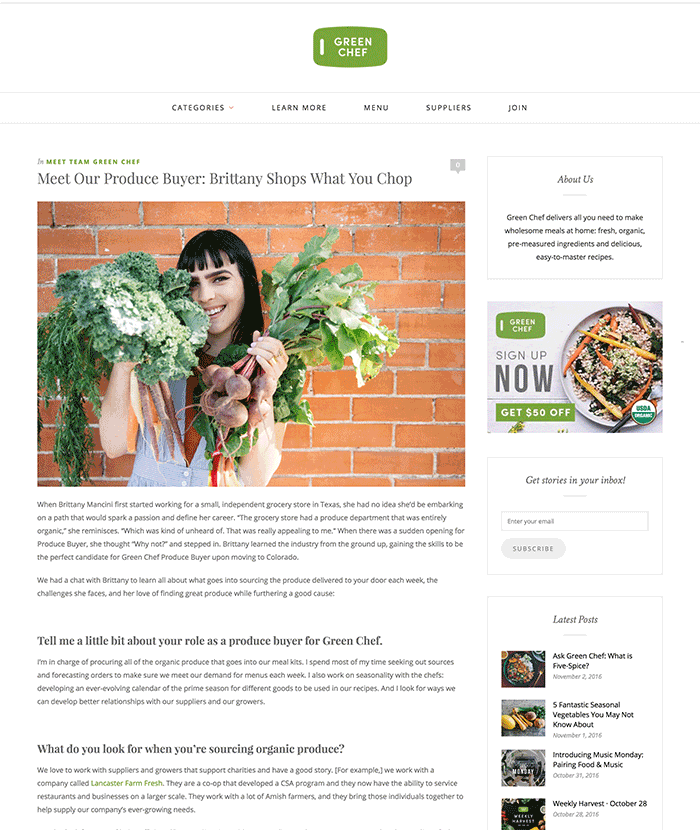 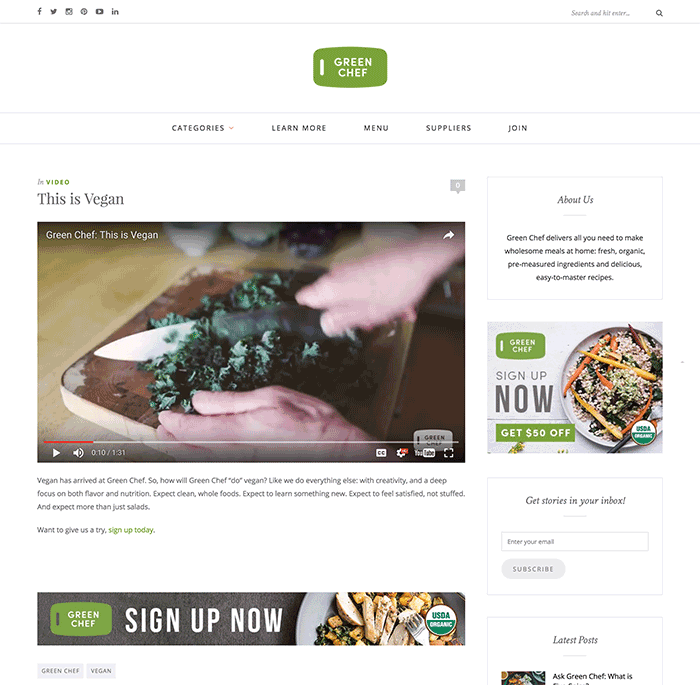 The food and meal kit delivery industry has definitely been booming as of late. It seems like most of the larger advertisers have been- and will continue to use – display advertising as one of their main marketing channels. The one thing that you should take away from this post is that native advertising can work for almost any business, even if it seems like yours isn’t related to many of the advertisers that pop-up in typical native feeds. Give it a shot, and use the advertisers we talked about today as inspiration.