Inside VISA’s $11.4M ad spend: How one of the largest finance MNCs in the world is disrupting the e-payments market..

Founded in 1958, Visa is an American multinational finance company that facilitates electronic funds transfers throughout the world, most commonly through Visa-branded credit cards, gift cards, and debit cards.

With operations across six continents, Visa processed 100 billion transactions during 2014 with a total volume of $6.8 trillion, according to a 2015 Nilsen report.

Let’s take a closer look at their advertising strategy:

2006: ‘Life Takes VISA’
After 20 years, VISA replaced their well-known tagline—”It’s everywhere you want to be” with “Life takes Visa”—as a part of their latest advertising campaign that was announced during the Winter Olympics.

“We moved away from just being a consumer credit card long ago, but the brand hasn’t kept up with that,” Susanne Lyons, Visa’s Chief Marketing Officer (CMO), explained to WSJ. “Life Takes Visa reinforces our brand promise to deliver innovative products and services that can be used anytime, anywhere and that empower Visa cardholders to experience life and business their way and on their terms,” she added.


Instead of encouraging people to spend more, the creative messaging focussed more on using Visa for things that are important to on a day-to-day basis. Whether you’re bowling with friends, planning a wedding, or taking dance lessons—VISA’s universally accepted, convenient payment method ensures that you’re financially ready for anything, anywhere.

In order to consolidate their marketing efforts (after their historic IPO announcement), including global creative advertising and media buying, the company launched the “More people go with Visa” (or the “Go” campaign) to highlight the value of using a VISA card over making cash or cheque transactions.

The TV commercials (that aired during the “American Idol” on FOX) explore the ways VISA can help people “seize the day” by empowering them to capitalize on the new possibilities, as and when they present themselves. For example, one of the ads features a father-daughter duo bonding over a seemingly ordinary day at the Aquarium. In the end, VISA asks a simple question, “When was the last time you went to the Aquarium with your daughter?“ in an attempt to encourage the viewer to “experience the beauty of every day” and leave the rest to VISA.


“One of the wonderful things about ‘More people go with Visa’ is it’s a universal truth,” said Kevin Burke, Visa’s head of global consumer marketing. “In some respects, it’s just a new, fresh articulation of the attributes at the core of our brand — universal acceptance, convenience, and security. … And ‘go’ is a universal word (that is) understood internationally.”

The company also created a microsite for cardholders to share recommendations, and merchant offers on different experi­ences that are payable through VISA.

“This is not about getting people to spend more,” Burke reiterated, “We’re really looking at how consumers are living their everyday lives … and how we can get them to convert cash and check transactions to electronic payments.”

2019: ‘Money is Changing’
In a previous study, VISA found that most millennials women didn’t feel confident enough to negotiate for higher pay—in fact, 60 percent of them feel awkward asking their own friends to pay them back.

For their latest advertising campaign, the company turned the mic over to women to understand how they think, feel and act when it comes to money.

“Meeting the needs of millennial women has become a strategic imperative for us, so we’re working really hard to close gaps,” explained Mary Ann Reilly, senior VP and head of North American marketing for Visa, “We are starting this conversation with women. Not to speak at them. But speak with them. We are having conversations around key themes of money: everything from dating, to friends, to work, self, and family. And we are going to the places where these women are already having these conversations—online and on social media.”

Based on their findings from live polling and social listening, they came up with How I Changed It—the company’s first initiative under the Money is Changing campaign—that features real women detailing their approach to money, and how they’re forging a change to make better financial decisions.

For example, in the following video, actress and musician Soko, talks about her personal experience with gender pay gap at work. When a male counterpart on a project she was leading was offered $30,000 more than her, she had to speak up—a crucial piece of advice she offers to young women in business— and even “threaten to leave” to secure fair compensation.


Here’s a similar story from Mel Jones, a multi-talented producer, writer, and director, who implores women to “have honest conversations” and “just ask for what they want” when negotiating for a professional opportunity.


“We’re creating a content series that takes the ‘Money is Changing’ tagline and becomes ‘How I Changed It’ – talking to women who have made a difference and have been able to overcome challenges they’ve had around money in the past,” Reilly told The Drum, “We’re using some of these small business owners as part of that content series.”

As a follow up to Money is Changing, Visa also announced the launch of She’s Next, a global initiative to support women-owned small businesses across the globe through shared technologies, research, and experience. As a starting point, the company partnered with Square and Yelp, amongst other brands, to equip women entrepreneurs with the necessary tools to fuel business growth. In an interview with PYMNTS, David Simon, the senior VP and global head of small / medium enterprise business at Visa, discussed the mentoring aspects of the program, while also highlighting how there’s simply “not enough conversation” around the specific set of challenges that women entrepreneurs face in today’s competitive industrial landscape.

Let’s take a look at their overall advertising strategy:

By comparison, MasterCard, their direct competitor, also has a similar budgeting strategy, as they, too, rely on Youtube ($752.9K), Direct Buy ($725.2K), and Google ($8.2K) for most of their advertising needs. 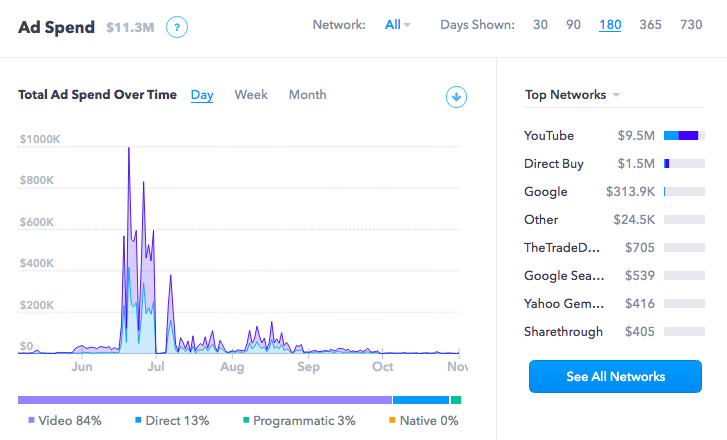 Considering that video as the type of content is likely to generate more organic traffic, revenue, and overall ROI, it comes as no surprise that today, 87% of online marketers actively use videos as a marketing tool to achieve their conversion goals. In fact, according to Cisco, “online videos will make up more than 82% of all consumer internet traffic by 2022”.

For viewers, videos are the easiest way to learn more about a brand’s offerings, which explains why 6 out of 10 people prefer watching an online video over good ol’ fashioned television. So, what’s the best way to attract potential customers from your target demographic using video content? Hint: There’s a reason Visa, Mastercard, and countless of other industry giants advertise primarily on Youtube, Google’s in-house, video-sharing/streaming platform.

Over 1 billion hours of video is watched on Youtube every day, mostly because, 65 percent of people habitually use YouTube when they need help solving a problem. Whether you’re renovating your house or looking to assemble your new IKEA table, about one-third of the internet (1.9 billion people) turn to Youtube for answers. By simply associating your video content with specific emotional triggers, brands are able to engage with a wider audience and accelerate their decision-making process.


Visa’s overall strategy of running their video ads on Youtube, alongside prime-time TV spots, is a testament to the proven power of video content and Youtube as a successful advertising platform.

On Youtube, their ads appear on videos that are either trending or belong to channels that have a large subscriber base. For example, they spent $1.3M advertising on this video with 745,845,339 views on a channel that reviews kids’ toys. While the video and the channel are not directly relevant to Visa as a brand, the channel’s 35M subscribers guarantee that the video will be watched by a substantial number of people—including the ones who might be interested in what Visa has to offer.

Even with other publishers, Visa’s ad placement is completely arbitrary—for example, landing pages that, one can only assume, are visited the most by the general masses. On Bustle and Go, their ads appear on articles about relationships, culinary delicacies, politics, technology, celebrity news, and mental health.

Creatives:
Seventy-eight percent of Visa’s ads are videos, whereas, 17 percent are images, 5 percent are HTML5, and less than one percent are text-only.

All of  Visa’s video campaigns are characterized by exceptional storytelling, agile content creation, and catchy taglines that ultimately resonate well with their target audience. Instead of heavily pitching their product/service from the get-go, the company attempts to emotionally connect with the people by introducing them to a relatable everyday scenario that can be simplified with VISA.

The duration of these ads is usually between 10 to 45 seconds—short enough to keep the viewer engaged, and long enough to convey the deliver the exact marketing message that’d positively contribute to the purchasing intent of potential customers.

Side note: According to Google, ads shorter than 15 seconds are becoming increasingly popular as they successfully capture the attention of mobile users. Given that 75 percent of all videos are played on mobile devices, more and more brands are experimenting with shorter videos to improve their reach, reinforce their message, and curb the overall campaign costs. As a rule of thumb, you should consider “three simple, impactful use cases for orchestrating your campaign story” and running an effective video campaign:

Landing pages:
Visa has dedicated, campaign-specific landing pages to accelerate the whole process of converting visits into sales. For example, one of their most recent campaigns is about contactless cards that allow users to pay with a single tap at merchant facilities like Starbucks, KFC, Whole Foods, CVS Pharmacy, and Costco among others. All their ads under this particular campaign direct the users  to the following landing page on Visa’s website that details the many benefits of contactless cards:

Using an explanatory video lets Visa walk a prospect through using a product or service, explain intricate nuances of the product much faster and more effectively than text could, and even illustrate the benefits of using your product or service in a more attractive, engaging way.

According to a study by Eye View Digital, including a video on your landing page can increase conversions by a staggering 86 percent. Especially for companies that offer a complex product, like Visa, video landing pages are an excellent way to cover and explain a lot of information in a short period of time.