Inside Vimeo’s $28M advertising strategy: How Youtube’s artsy, ad-free, alternative is making a dent in the video-sharing landscape.

Launched in 2004 by independent filmmakers—Jake Lodwick and Zack Klein—who wanted to share their professional/personal work online, Vimeo is an ad-free, video-distribution platform that caters primarily to a like-minded creative community.

By Dec’13, Vimeo was representing 0.11% of the total Internet bandwidth with more than 22 million registered users, and 100 million unique visitors per month.

Notable comedians like Kristen Schaal, “Weird Al” Yankovic and Reggie Watts have been actively using Vimeo to promote their content, alongside musicians like Kanye West, Nine Inch Nails, and Britney Spears. What’s more? Even Barack Obama, the former president of the USA, broadcasts his HD transmissions on the platform. 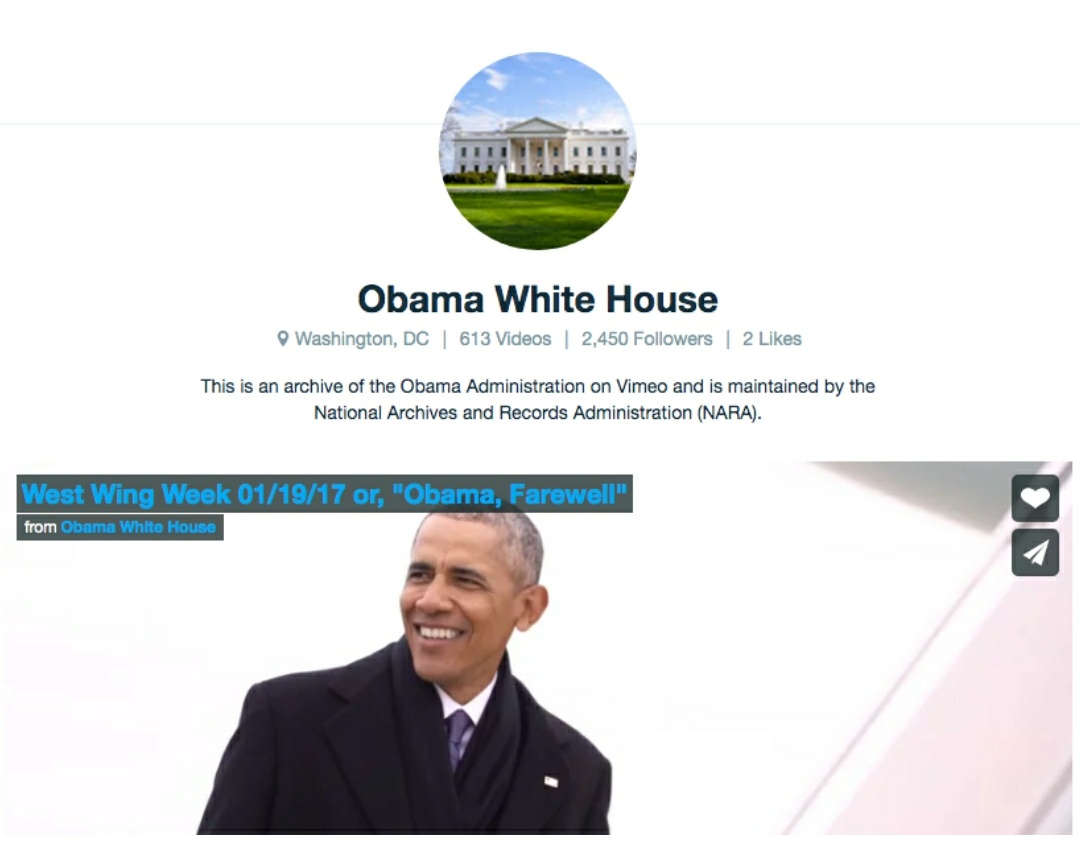 According to Harris Beber, Vimeo’s CMO, the company clocked in a handsome revenue of $160 million in 2018, with a year-on-year growth of 54 percent. By comparison, YouTube, the Google-owned, video-sharing giant, continues to remain silent on their revenue numbers, however, analysts have projected that the platform generated $15 billion in sales the same year. Unlike Vimeo, YouTube doesn’t offer a subscription model to their customers, and instead, allows them to showcase their content on their platform at no charge—which is one of the biggest reasons why it has experienced consistent, monumental growth in the last few years.

Regardless, Vimeo is currently home to 90 million creators (and 240 million monthly active users) who use the platform for selling their products/services, discovering potential sponsors, and receiving donations from their viewers via Patreon. The company also acquired VHX, Livestream, and Magisto in recent years to take their subscription-driven, high-definition, video creation platform to the next level.

Considering that video content will command 80% of all web traffic in 2019, Vimeo, despite being a smaller, more niche platform, caters to the unique needs of creators (including brands). Let’s take a quick peek into their previous and ongoing ad campaigns to understand how exactly they plan to stand out in the competitive landscape.

2015: The “Interrupted” campaign:
In order to highlight their ad-free experience, Vimeo launched a video ad campaign featuring two partners using sign language to communicate with subtitles transcribing their exchange. A few seconds in, a bunch of pop-ups begin infiltrating the screen and make it difficult for the viewers to follow the subtitles. You cannot skip, or “x” out of these ads because they’re part of Vimeo’s whole promo to illustrate that intrusive ads are just pesky distractions that ruin the overall user experience.

By employing a “self-aware” approach—that’s both bold and exhilarating, the ad elevates the basic narrative of the campaign by poking fun at themselves and including viewers as a part of the joke.

After being in business for over 15 years, Vimeo wanted to evolve and establish themselves as a video-streaming platform that prioritizes creators over viewers. “Many people still perceive Vimeo as a place to watch video,” Anjali Sud, CEO of Vimeo told WSJ, “We don’t compete with Netflix or YouTube for viewers. We are really instead focused on the people behind the camera.” As a result, the biggest challenge for the company was to find a super simple, sticky way to convey a simple message: Vimeo, as a brand, offers tools and services that are designed specifically to give your videos that extra ‘oomph’.

Moreover, Vimeo used Youtube’s pre-roll spot to run their ad to emphasize their point even more. They start off all their ads with a little tongue-the-cheek disclaimer— “This is an ad before your video. Vimeo doesn’t have these,” to remind people about the ad-free experience they offer.

Harris Beber, Vimeo’s CMO, also clarified that the campaign was meant to resonate with not just the creative community, but also to businesses looking to invest in video ads. “We’re building out our product offering so anyone⁠—from filmmaker to a local business to a fortune 100 brand⁠—can create high-quality video at scale,” he said, “Our biggest value is our biggest challenge: We offer so many tools and services to creators, across so many different use cases. That’s very difficult to convey in a world where you have three seconds to capture someone’s attention. We can’t speak to all of that in one campaign, so the simplicity of [this campaign] cuts through all that, no matter what your needs are.”

By reaching out to a wider audience pool, the company managed to successfully move away from their current reputation of being a content creation platform to become widely recognized as an end-to-end software for video production, and distribution.

In addition to the video ads, the campaign also incorporated digital, social, audio and OOH assets, that communicate the most valuable USPs that  Vimeo has to offer in today’s competitive landscape⁠—for example, an ad-free, HD live-streaming experience. 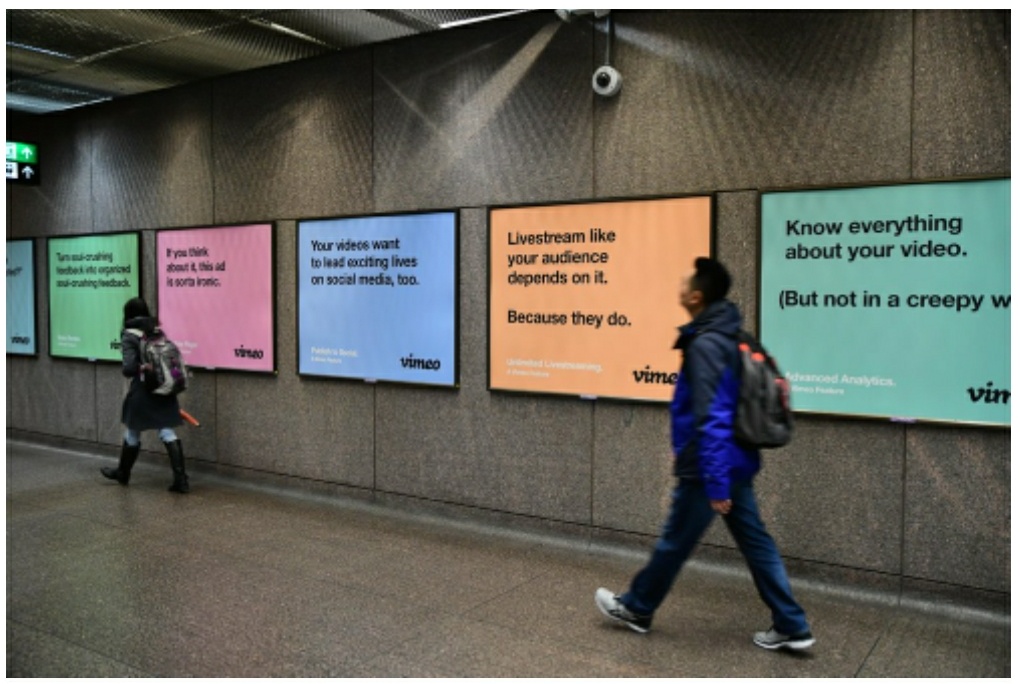 Overall, the campaign was able to deliver engaging, likable, and most importantly, informative ads across several channels (including the NYC subway!) that encouraged people to use Vimeo for taking their video content to the next level.

Let’s take a closer look at their advertising strategy so far:

Ad Spend and Ad Networks
In the last 6 months, Vimeo has spent a whopping $28M on online advertising, with the majority going towards Google ($22.8M) and Direct Buy ($4.4M). While the former is based on a real-time bidding system, where you (the advertiser) can decide on the maximum amount you’re willing to pay per click on your ad, the latter allows you to directly negotiate with a publisher (for example, ESPN or CNN) to purchase advertising space. Given their ad network preferences, it comes as no surprise that 84% of Vimeo’s ads are programmatic, whereas, only 16% of them are direct. 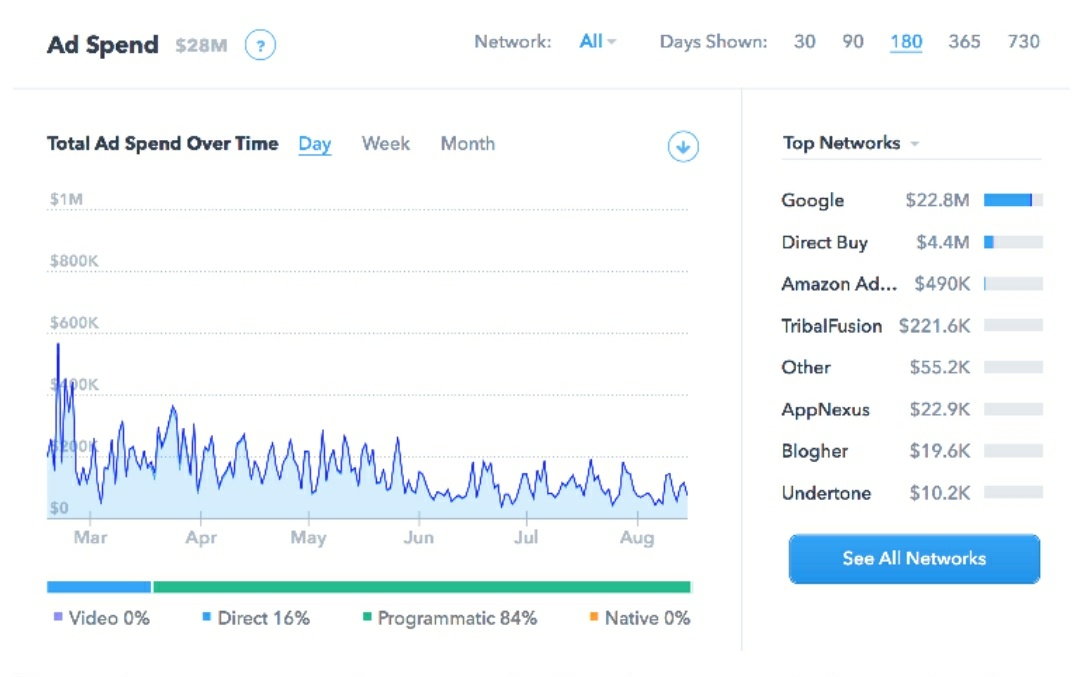 Since the company shows no inclination towards investing in native ads, and recently released a large-scale video ad campaign, we can safely assume that they’re primarily using Google to buy ad space before, after and in the middle of YouTube videos.

Publishers
Three of Vimeo’s top publishers have remained the same for the past year —Dictionary.com ($3M), Merriam-Webster ($569.5K), and Wikihow ($290.2K). In the last 6 months, they’ve moved away from WebMD and freedictionary.com and currently advertise with Food.com ($390.5K) and AccuWeather ($269.8K) instead. 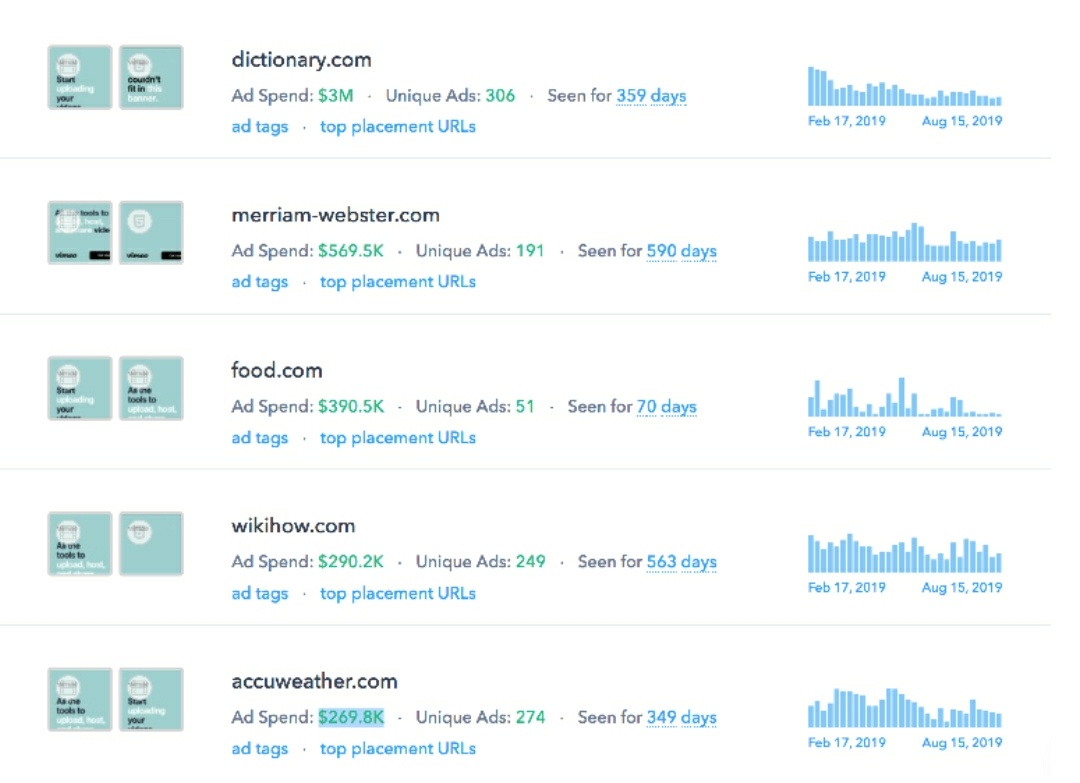 Most of their money goes towards ensuring that the ads appear on the homepage of the aforementioned publishers. Apart from that, there isn’t a specific placement pattern that Vimeo adheres to, as their ads appear on arbitrary landing pages on all platforms. For example, on Dictionary.com, the company spent approximately $110K to advertise on pages that show the definition of the terms confident, and kalakh; and the phrase, ‘I suppose so’. 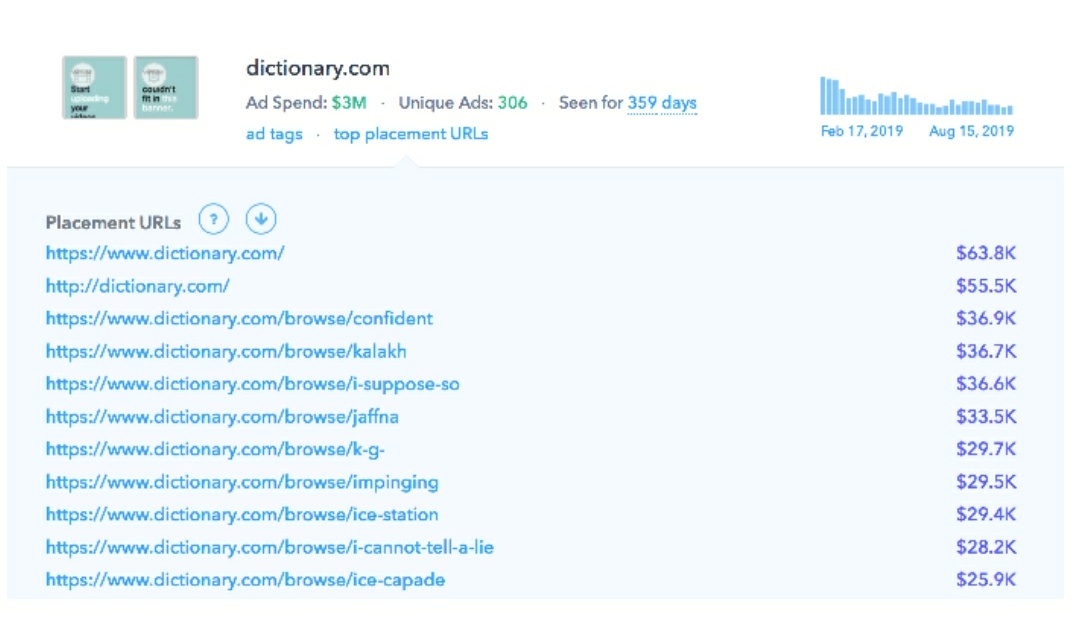 Overall, it’s safe to conclude that Vimeo prefers advertising with publishers that are raking in a significant number of visitors every month, so their campaigns are seen by as many people as possible. They’re not putting much effort towards reaching the right people by using advanced targeting parameters like a lot of brands—and that seems to be working out for them at the moment.

Creatives:
After partnering with Fig, an NYC-based agency, Vimeo unveiled a campaign featuring 14 videos that showcase people stuck in a variety of ridiculous (yet comedic!) situations⁠— waxing their backs or navigating through revolving doors⁠—that they most definitely need assistance with. Directed by Emmy Award-winning, Vimeo creator, Alex Prager, the videos are short (17 seconds), and end with a straightforward marketing message that emphasizes on how, “Vimeo can help⁠—but only with your videos.”

Well-known for her cinematic, delicately-staged tableau, Prager was instructed to “make a large number of short-format, ‘quick hit’ films with few or no cuts” to maintain a strong visual point of view. After all, the primary objective of this campaign was to deliver simple stories that generate high-level brand awareness and establishes Vimeo as a platform that caters to creators.

Let’s peep into their HTML5 ads:
Pastels are not just easy on the eyes, but are associated with positive emotional connotations like “optimism, innocence, festivity, and delight”. The tongue-in-cheek copy is very on-brand with Vimeo’s other ads and is a welcome change from the cookie-cutter, hard-selling ad copies that can turn off potential customers, instead of engaging with them. While using a black CTA button isn’t usually recommended, since the color tends to blend in with the rest of the webpage in most cases, however, in Vimeo’s case, it stands out perfectly against the powder blue/green background.

Landing page:
Almost all of Vimeo’s recent campaigns (especially the video ads) redirect to their homepage, where the viewer is met with their current brand tagline (Vimeo can help*), alongside two CTAs that are visually prominent, and interactive (change their appearance slightly with a mouse hover) without being flashy.

The ‘See plans’ CTA is meant for users that are ready to buy when they land on Vimeo’s homepage, however, some people like to test a platform and the features they offer before making a purchasing decision. For the latter, the ‘Join for free’ CTA is a great option based on their current needs. 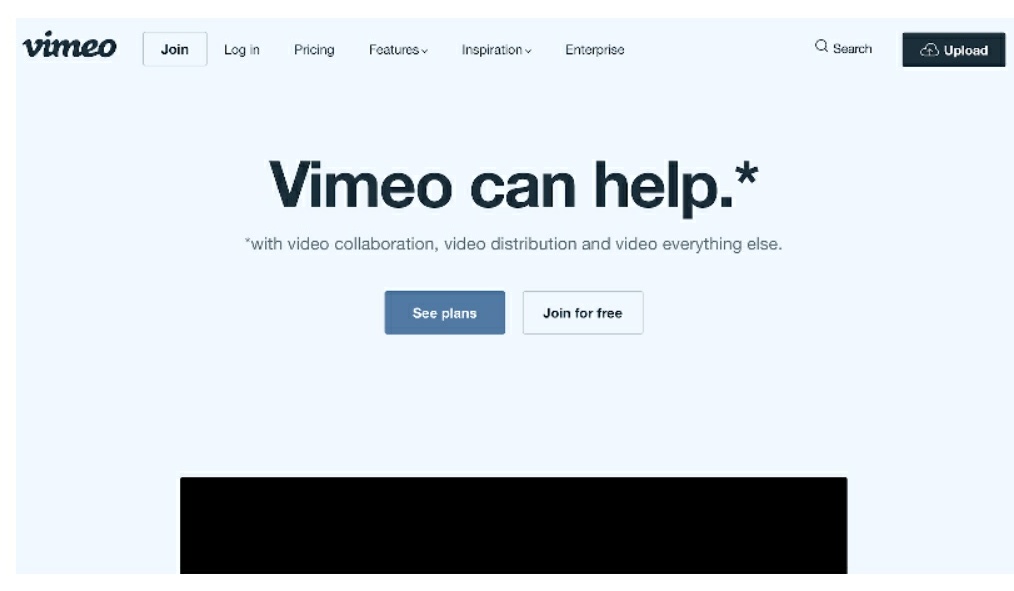 You can also see the ‘Join’ and ‘Upload’ CTA in the top navigation bar that opens up the same ‘Sign Up’ form. While some brands might not be very keen on the idea of having multiple CTAs on their homepage, an invespcro case study found that having more than one CTA can actually increase conversions by 20 percent.

When you scroll further down their homepage, you’re met with interactive videos that demonstrate how customizable, brand-friendly, secure, and collaborative Vimeo actually is. In what can only be deemed as a rather smart move, the company doesn’t spend a lot of time elaborating on their features⁠. Instead, they simply use a sentence or two to outline all their USPs, introduce you to their paid-plan pertaining to every USP in as little words as possible (“Plans with custom players from $7”), and then throw in a ‘Compare plans’ CTA that encourages viewers to check out the pricing plan that aligns with their requirements.

You can obviously click on ‘Learn More’ under every USP to get all the information you need about how Vimeo can help you as a content creator.

Conclusion
While Vimeo can simply never compete with Youtube in terms of numbers at the moment, the best part is that they aren’t even trying to. Instead, they’re more focused on introducing a profitable business model that works only for a specific, community-driven audience group. In short, they’ve successfully managed to make a dent in the uber-competitive, video-sharing landscape, without actually competing at all.

As for their advertising strategy, their recent creator-centric campaigns hit the nail on the head by reminding potential users of the multitude of services Vimeo offers for creating, distribution, and optimization of video content. The ‘artsy’, ad-free alternative to Youtube has managed to consistently hit the home run by maintaining an eccentric, light-hearted voice (throughout their campaigns) that speaks directly to their target audience. Their hefty investment in video ads is an indication that the medium seems to be serving them well.

On a similar note, they’ve undoubtedly narrowed down the advertising elements that work for them—their publishers, for example, that have more or less remained the same in the past year.

Overall, Vimeo seems to be putting their money where their mouth is by delivering campaigns (albeit, sporadically)  that are straight-forward, engaging and effective without being redundant and lackluster.