How 3 Web Hosting Platforms use Digital Ads to Generate Leads

The web hosting industry is set to be a $154 billion market in 2022. Tens of thousands of companies are competing for a diverse audience — from college kids to multi-national corporations. To stay in business, most companies have differentiated themselves by catering to a specific niche.

The best of the lot use digital advertising channels to reach the top:

We analyzed their complete advertising funnel — from the niche of publishers they’re running ads on to the type of ad creatives they’re using and even their landing page strategies.

Founded in 1998, Rackspace was made private in August 2016 thanks to a $4.3 billion deal by Apollo Global Management. However, there are rumors that they might go for another IPO soon.

Thanks to annual revenue of around $2 billion, they spend millions of dollars per month on ads. Also, they can afford a higher CAC (customer acquisition cost) as their customer LTV (lifetime value) is very high.

Rackspace spent $46.9 million in the last 24 months. They’ve focused more on the Google Network by spending $37 million there while only $7.9 million was spent on direct buys. 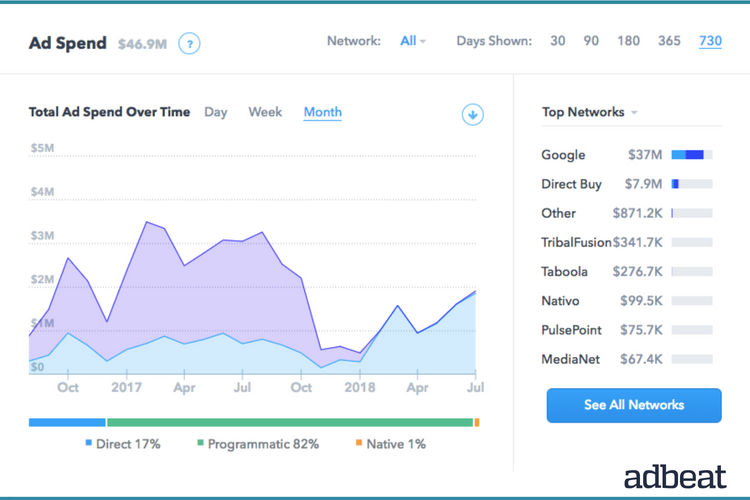 However, they’ve completely trimmed down money spent on direct buys since November 2017: 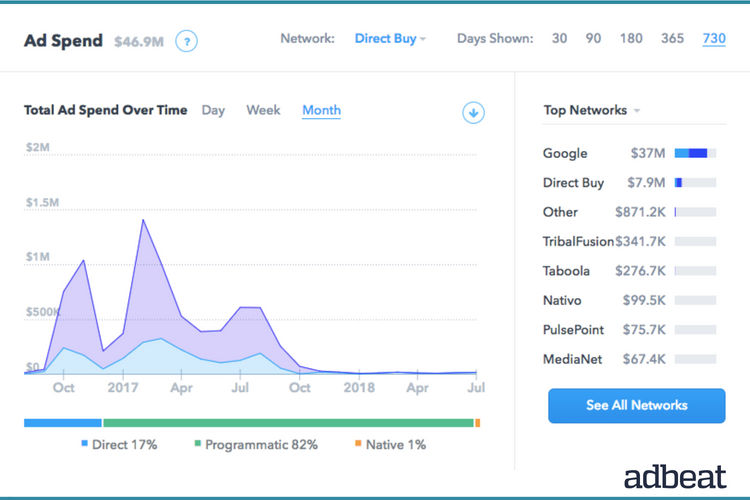 Most of the buy-ins were spent to get exposure on the homepages of premium business publishers like Forbes, Fortune and TechRepublic.

This is a result of Rackspace completely stopping ads on these sites, which used to be their main focus.

Rackspace has spent $4.4 million on Forbes, $1 million of which was for its U.S. homepage alone.

These are expensive campaigns with a minimum CPM (cost per 1000 impressions) of $10. There is a possibility that while these campaigns provided good ROI in the beginning, after a point, the same people begin to see the ad over and over again. This could’ve reached a saturation point, thus reducing ROI and forcing them to look for other channels.

After drastically reducing their spend on direct buys, Rackspace is now focusing heavily on “how-to” websites like Tutorials Point, Tom’s Hardware, How-to Geek and wikiHow and even websites like Dictionary and Thesaurus via the Google platform.

These campaigns are an attempt to attract individuals and SMBs that have the money to spend but do not come under the “premium” corporate category.

Rackspace stands out from the rest of the advertisers on this list because they use creative HTML5 ads. They also use image-based ads in their campaigns. 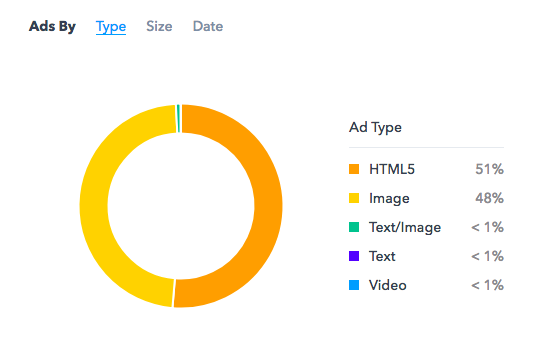 Their most successful ad campaign consists of two HTML5 visuals.

One reads “Don’t keep your audience waiting on page loads” and shows a text box where leads can enter their web address. There’s a CTA that says “Test your server.” This is probably the best interactive ad we’ve seen in a long time: 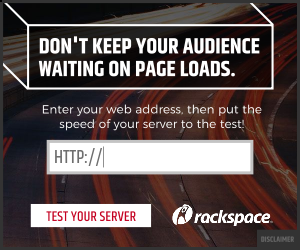 The idea is to encourage leads to enter their web address to see their results.

They also lure enterprise customers who are using Google Cloud and AWS with these ads:

Many of Rackspace’s ads direct leads to their homepage, which is used to build trust and redirect leads to sub-landing pages that are more personalized.

The CTA — Get Started — takes people to another page that lists the main features.

If you move down the homepage, they’ve flaunted their recent “Partner of the Year” award from HPE:

The main aim of this section is to garner trust and establish their authority at the same time.

Further down the homepage there’s a section that shows the different services they offer:

There is a “Learn More” CTA under each service. When clicked, it takes you to a landing page that explains how Rackspace is the best in the industry when it comes to that particular service.

The next section of the homepage tries to sort visitors based on their industry:

Under each industry, there is copy that tells the visitor how many customers they serve and to the right is a video that explains more. Once you click on the CTA, it takes you to industry-specific landing pages.

Below that section are two CTAs:

The “Request Free Quote” button opens up a lead generation form while the “Chat Now” link opens up a chat window. Both are aimed at pushing you further down the funnel.

The last section of the homepage is mainly to educate site visitors:

This is an attempt to reduce bounce rates and make visitors curious enough to stay on the website.

While their homepage is a great landing page, we feel the first section falls a bit short. While they have mentioned their value proposition, there is a good chance many visitors will bounce as they haven’t done anything to incite curiosity.

What we can learn from Rackspace’s Ad Strategy

Liquid Web is a $100 million web hosting company founded in 1997. They specialize in managed web hosting services catering to SMBs and manage over 500,000+ sites spread over 130 countries. They also have a huge e-commerce customer base thanks to their specialization in WooCommerce hosting.

Liquid Web has spent around $6 million on ad networks in the last 24 months. They’ve gone all in on Google Network sites by spending around $5.8 million there.

Our data shows that they’ve been spending like hills and valleys over the past two years: 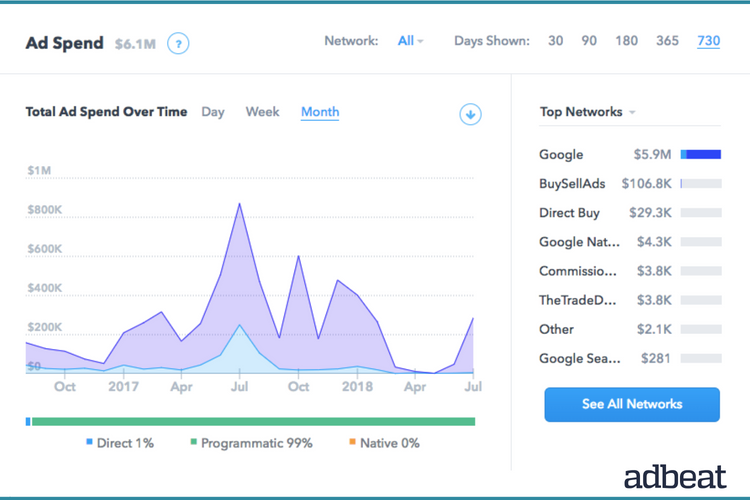 All the spikes denoted times when they ran discount campaigns. For example, they spent $330.7k and $334.4k on their most recent holiday sale:

A very interesting thing to note is that the majority of their ads are mobile ads targeting iPad users. This is because the iPad has become the most popular device used by SMBs ever since its launch.

Liquid Web has spent massive amounts of money on publishers like MacRumors and 9to5Mac.

They’ve even targeted iPhone and iPad-related pages in Softonic:

As you can see, all these ads ran during the same time period.

Liquid Web’s overall strategy is to conquer a particular niche and then move on to others. At any given time, they mostly concentrate on similar websites so that they hit the same user again and again via different publishers.

Liquid Web concentrates only on image-based ads. A lot of these are GIFs. 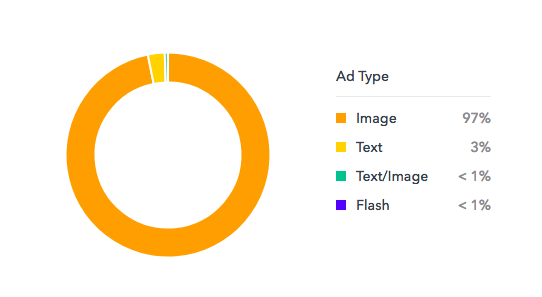 They’ve tried a few text-based ads. But those don’t work as well as images when it comes to the discount campaigns that they run throughout the year:
Season-specific colors are used for relevance.

For normal campaigns, they seem to have found decent success using GIF ads: 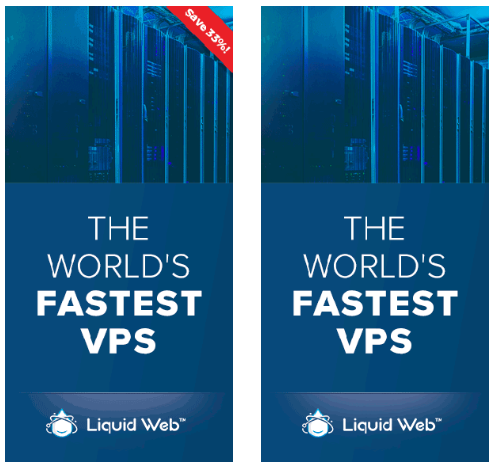 Liquid Web has done a much better job with their landing page compared to Rackspace. The first section of the landing page has elements that stimulate interest. They’ve kept links called “[proof]” that can induce curiosity.

Every link in the header except the “Chat With Us” button takes the user further down the page.

Below, they show their different plans:

Each plan has an “Order Now” CTA button that will take the visitor directly to the checkout page.

They have a section showing an industry report that proves how they are better than their competition:

This is great proof to show how they’re better than their competitors.

This is followed by another section that compares them to their competitors in terms of pricing and features: 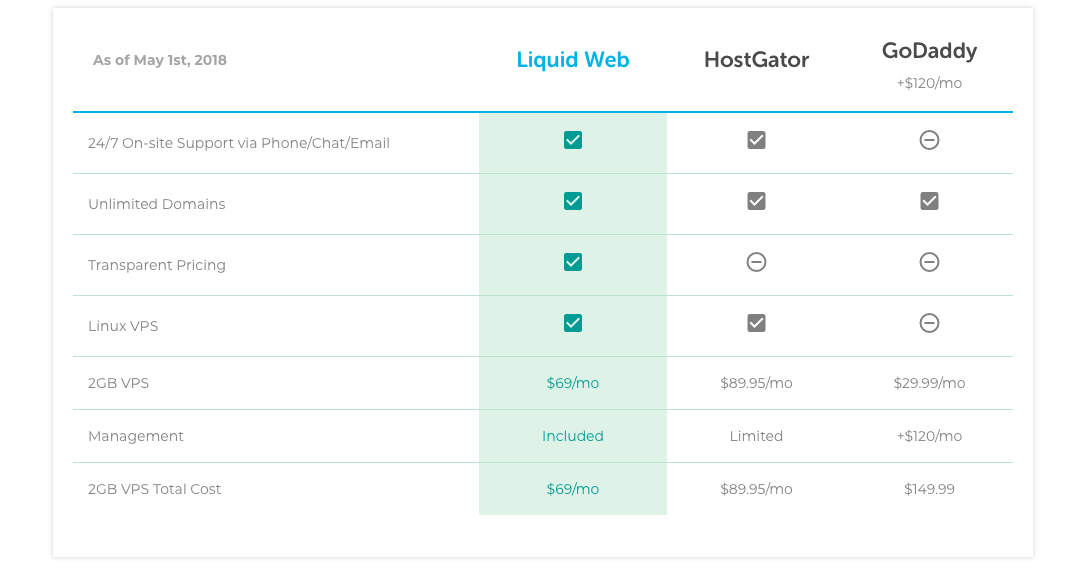 There are many CTAs in between these sections:

Just like Rackspace, both are aimed at lead generation.

Towards the end, there is an FAQ section and list of blogs to read:

These two sections are designed to reduce bounce rates and educate visitors.

Liquid Web’s landing page is very similar to Rackspace’s homepage and even better in many aspects. The only negative is that they haven’t done anything to guide visitors to personalized sub-landing pages. Though they are targeting just SMBs, this kind of personalization will help them increase conversions.

What we can learn from Liquid Web’s Ad strategy

Founded in 2003, Bluehost was acquired by Endurance International Group in 2011 for an undisclosed amount. Along with their sister companies, FastDomain, iPage and HostMonster, they host more than 2 million websites.
They target low-end customers who can only afford shared hosting. 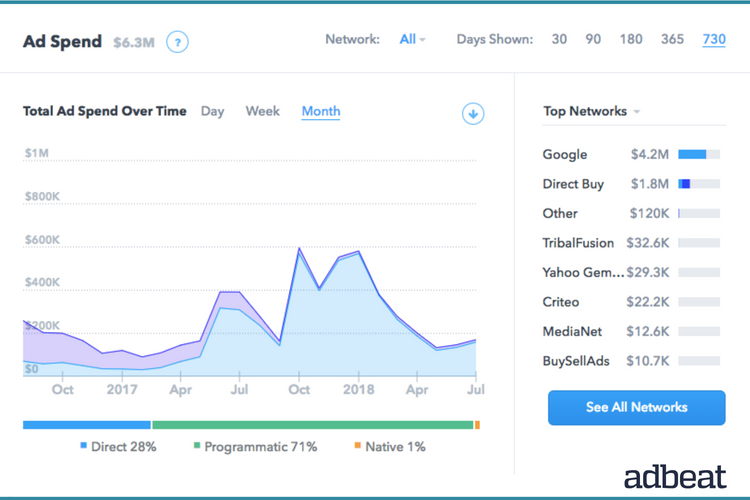 Just like Rackspace, they also stopped direct buys some months ago. 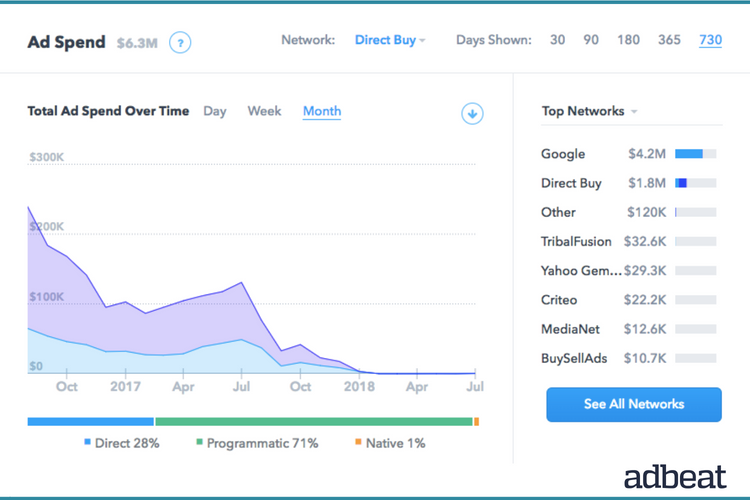 Looking into their publishers gave us some idea as to why this could’ve happened.

Most of their direct buy ads, around $851.3k, were spent on one publisher – The Woks of Life. This could have been an attempt to ride the “Asian food” trend that’s been rising over the years:

But why did they suddenly stop the spend?

This looks like a recurring theme that’s very similar to what happened to Rackspace with Forbes.

The problem here is that after a particular amount of time, you’ve already gotten exposure to the publisher’s core audience. Unless the publisher is able to bring in an equal number of new users, the ROI is bound to go down. This means that direct buys may not be a long-term option if you depend on just one publisher.

Bluehost has also run tons of ads on the Google Network targeting websites like wikiHow, Reddit and Dictionary. 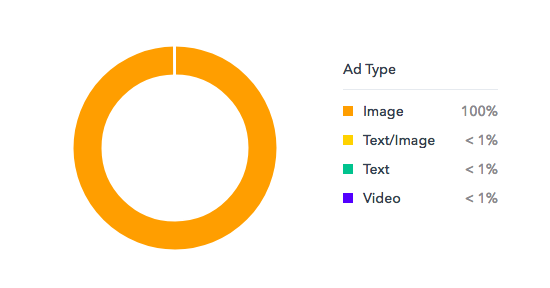 They have mainly two styles of image ads. This is their most used one: 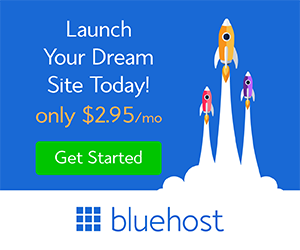 It’s a very inspiring ad that can attract anyone planning to create a website. They’ve included pricing of $2.95/mo and a CTA of “Get Started.” The rock-bottom pricing is sure to catch anyone’s attention.

The other style is based on their tie-up with WordPress – the most popular CMS on the planet: 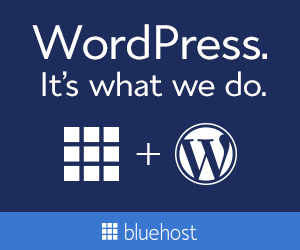 WordPress formally endorses Bluehost as the best hosting service for WordPress sites. These ads are part of this campaign and are one of their most successful ads to date.

Anyone who’s planning to start a WordPress site will instantly feel the connect:

Ironically, this “Special Offer” is there for every visitor.

Further down the page there is a features section: 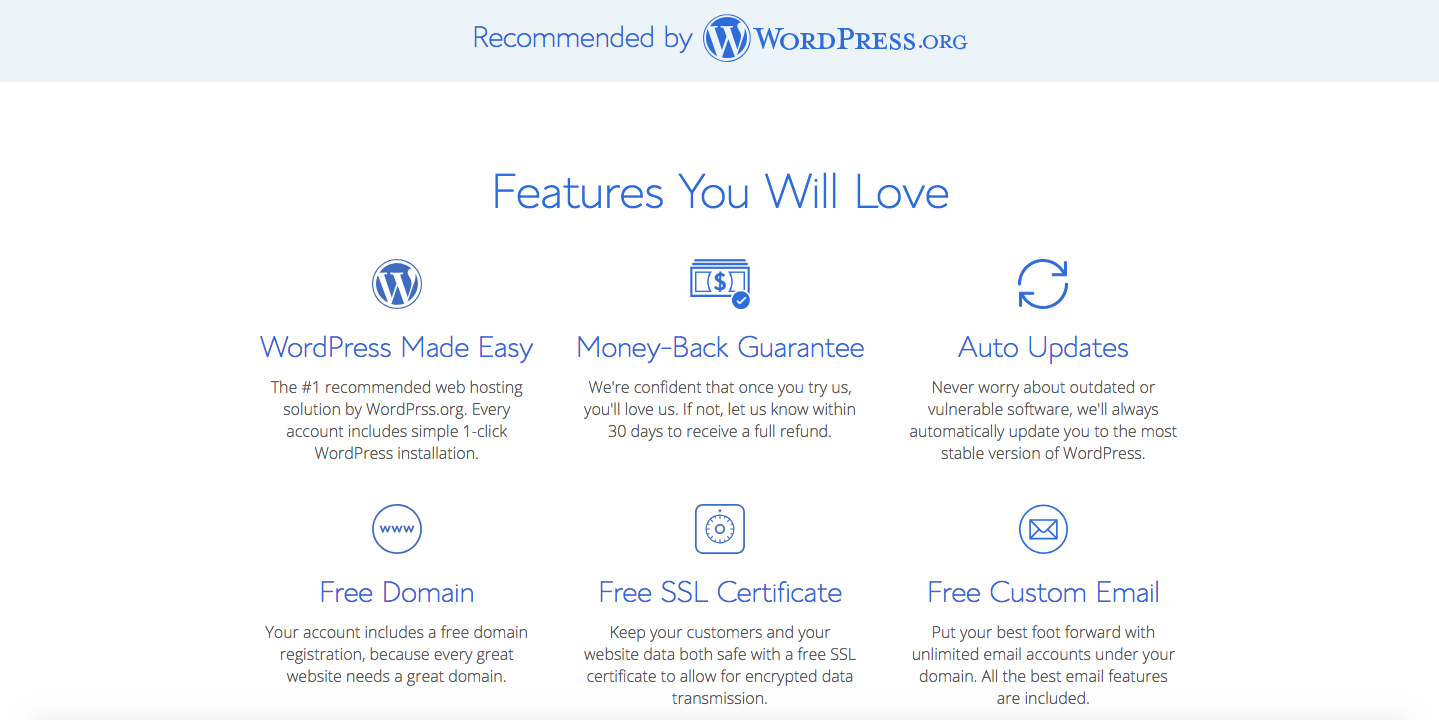 “Recommended by WordPress” is the highlight of this section. This induces major amounts of trust in the visitor.

To make it more appealing, they even have exclusive WordPress support:

The continued use of “WordPress” is also for SEO. This page ranks on the first page for the keyword “WordPress hosting.”

What we can learn from Bluehost’s Ad strategy

For this study, we chose three companies from the same industry serving slightly different customer niches. We did this to provide you with an overview of how each company changes their pitch and style of ads accordingly. Moreover, you also get a holistic view of the web hosting industry.

Of all the strategies, the HTML5 ads used by Rackspace were the most unique. Bluehost’s strategy of making existing discounts look exclusive is another strategy you can try to increase your ad conversions if you are in the B2C segment.

The most interesting insight of them all is the failure of direct buy-in ads over a period of time that reflected on both Rackspace and Bluehost. This shows that relying too much on a particular publisher for a long period of time is not sustainable, no matter who your target audience is.