Escaping Advertiser Hell: How to Get Over the AdBlock Hurdle [with Infographic]

Was it an auto-play video? A page take-over? An interstitial that forced you to wait 20 seconds before you could see the content you came for? Take your pick… it’s easy to find dozens of examples. 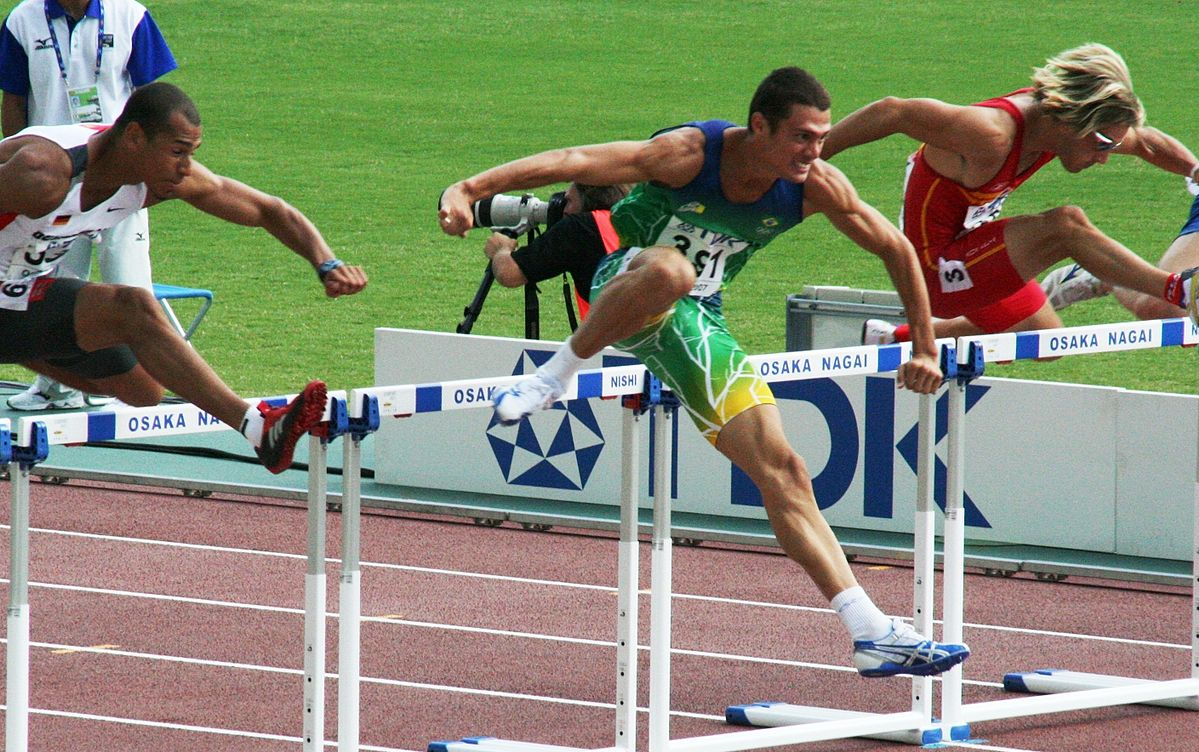 If you’re constantly annoyed by these intrusive ads, you’re not alone. These types of experiences have been driving the growth of ad blocking for quite a while now. Even unsophisticated users have discovered that by taking 1 minute to install a browser extension, they can wave goodbye to display ads for good.

This is obviously an issue for both advertisers and publishers as it deprives them of both audience and revenue — and it hasn’t gone unnoticed. There’s now a constant buzz in digital media circles about ad-blockers posing a bigger and bigger threat to digital advertising every year.

The fact is, by the end of 2017 some 30% of users are expected to be using these tools to screen out ads. That means that nearly one in three users will never see display ads, under any circumstances.

Just How Big is the Ad Blocking Threat?

AdBlock (created by Henrik Aasted Sorensen) was the first ad-blocking browser extension that went viral. When it was first released, it was pretty basic.  It would simply hide ads from appearing in a user’s browser.  That’s it.

Yet even with that simple functionality, Sorensen and his creation are likely responsible for disrupting publishers from earning millions of dollars in revenue. Curiously, Sorensen himself didn’t make a dime from AdBlock. Instead, he distributed the code free-of-charge.

In 2006, Wladimir Palant (future founder of AdBlock Plus), picked up the code and rewrote it.  When he was finished, the software didn’t simply hide ads from being seen; now ads wouldn’t be downloaded to the browser at all. That’s how AdBlock Plus was created, and Palant still works in the company as CTO.

According to a 2017 report by PageFair, AdBlock is now installed on 615 million devices. Clearly, the large number of installs proves that it’s a real and emerging threat to online advertising. And if that’s not enough for you, stats from as recent as 2016 indicate that AdBlock usage is growing at 30% globally every year.

According to Juniper Research, unless something drastically changes, digital publishers are going to suffer losses of $27 billion by 2020.

As if colossal potential losses on the horizon weren’t enough, there’s an additional wrinkle to contend with: Google has announced they’ll be adding their own ad block functionality to  Chrome.

Google has recently started a few initiatives that we should talk about. First, Google confirmed an ad blocker will be added to Google Chrome in the first months of 2018. They also joined the Coalition for Better Ads, a group dedicated to improving online ads. And finally, they issued the Better Ads Standards guidelines to make online ads less intrusive/disruptive. Essentially, it’s a “best practices” to reduce bad user experience from ad formats that have just gotten out of hand.

But wait just a minute.  How can adding a built-in ad blocking extension to Chrome (the world’s most popular browser) be a good thing? To find out we turned to Sridhar Ramaswamy, Senior Vice President of Ads and Commerce at Google, who wrote: “Online ads should be compelling, useful, and engaging—ones that people actually want to see and interact with.”

He also posted this on his blog:

“Chrome has always focused on giving you the best possible experience browsing the web. We believe these changes will ensure all content creators, big and small, can continue to have a sustainable way to fund their work with online advertising.”

So I guess we can sum up Google’s position like this: Google recognizes that there are a lot of unsavory players and intrusive ad formats giving digital advertising a bad name.  It makes sense to embrace some kind of ad blocking to thwart the bad players and encourage the industry to use ad formats that don’t create a bad user experience.

But, What Do Users Really Think About Online Ads?

To find our answer, we turned to research conducted by two well-respected companies:  PageFair (IAB with C3Research), and Hubspot (with AdBlock Plus involved).

PageFair has a technology for reinserting display ads (replacing non-formatted display ads with the ones that would be whitelisted by AdBlock Plus) and has the expertise to draw solid conclusions from the data in its statistical reports.

Hubspot, is known for exceptional insights in its surveys. For this particular research, they partnered up with AdBlock Plus, the biggest ad blocking company to date.

You may be tempted to assume that users would have close to zero tolerance for online advertising, but you’d be wrong

To begin with, take a look at the reasons people gave for installing ad-blocking software in the first place… 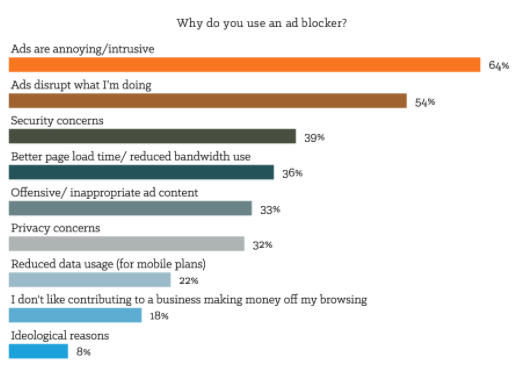 Sure, the top two reasons are what you might expect: People think ads are annoying and ads are disruptive. But when you look at 3rd and 4th place, things get more interesting. 39% of respondents cite security concerns about viruses and malware. 36% cite concerns about ads increasing page load time and interfering with bandwidth/performance.

The good news is, users didn’t reject online advertising completely. They realize that advertising is the source of income that keeps their favorite websites operating; so, they’re open to at least some ads.

In fact, 68% of Hubspot survey respondents said they were fine with seeing ads, as long as they weren’t annoying. As for ad tolerance, according to PageFair, static banner ads are the most acceptable form of online advertising. Scoring at the very bottom of ads users are willing to tolerate were non-skippable video ads. Native advertising fell right in the middle, which may help explain the continued growth and effectiveness of native ad formats.

You are able to let this majority of internet users see your display ads. If you don’t have a clue how, to begin with it, start with monitoring what your competitors do. Adbeat is a tool that allows you to monitor advertisers and study the details of their display campaigns.  Try it for free right now.

So, Is Beating AdBlock Even Possible?

It’s an uphill battle, but we’ve come up with several approaches that may help.

Certain technologies allow bypassing ad-blocking extensions. The most notable are PageFair and SourcePoint. PageFair’s technology serves ads in a way that limits an ad blocker’s effectiveness.  One of the ways it does this is by automatically rendering ads according to Better Ads Standards guidelines and re-inserting them.

While this is a viable option for websites that want to keep ads visible to as much of their audience as possible, it’s not a silver bullet. If a user turns off all of the ads with AdBlock Plus even PageFair ads won’t make it through. As of this writing, one out of four AdBlock Plus users have the software set to block out all ads. So even on a good day, only about 75% of AdBlock Plus users would see ads processed by PageFair.

You can always pay to play. Eyeo, the company that owns Adblock Plus, charges huge companies like Google, Amazon, and Microsoft for including their ads on a list of so-called “Acceptable Ads”.

The creator of the original code believes that whitelisting techniques have “a fine line to walk”. AdBlock Plus doesn’t take money from small websites to be included in those whitelists.  It charges only major players, but the earnings from those major players reportedly reach into the millions of dollars.

There may be a chance you can find placements for your ads on whitelisted websites. It also wouldn’t hurt to double check that the publisher sites you’re planning on running on are included in the Acceptable Ads program. These publishers would offer the most chance for users to see your ads, even if they did have AdBlock Plus turned on.

AdBlock Plus may be popular with desktop users, but can the same be said for mobile users?

Take a look at this report from PageFair:

AdBlock usage is now mainstream across all ages.”

At first glance, PageFair’s report doesn’t seem to offer us much hope. However, things get interesting when you dig deeper. Take a look at this: 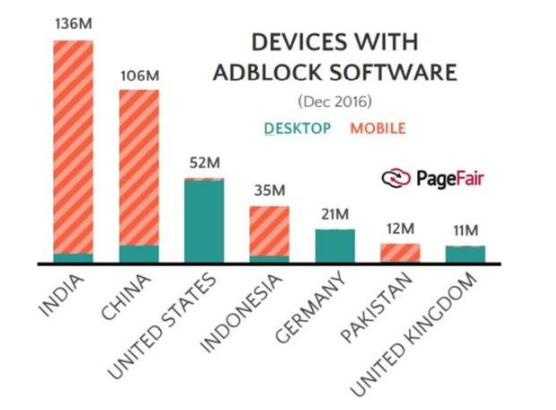 Notice anything interesting?  The chart shows that the vast majority of mobile users who are using ad block technology are from China and India. This makes perfect sense if you also know that the UC browser (with built-in ad blocker) is immensely popular in China and India.  The UC browser is actually installed by default on many of the devices manufactured for Asian users.

The good news is: there are only 52 million mobile devices with AdBlock in the United States (out of an estimated 224.3 million total in 2017); and the growth of AdBlock usage is almost nonexistent (less than 1% year).

Looking at the stats and speed of mobile ad-blocking growth, it’s likely that it’ll be quite some time before ad blocking becomes as problematic for mobile advertisers as it currently is now for desktop advertisers.  So it’s safe to say, there are still a lot of opportunities when it comes to mobile display in countries outside of Asia.

While there’s no universal way of beating ad blocking software entirely, here’s what advertisers and publishers can do right now so it has less of an impact:

For now, the industry will be watching closely to see how the Google-led initiatives end up working. Once the new Chrome with ad block is rolled out, and the most intrusive ad formats are blocked by default, users may not feel the need to install additional more aggressive 3rd party ad blocking extensions. That will be a good thing for the industry as a whole. And ultimately it will be good for users; publishers will stop hemorrhaging revenue and be able to keep publishing high-quality content that users have come to expect.

Do you have an opinion or tips on dealing with ad blockers? Please drop us a comment!