How TaxAct and H&R Block leverage the tax season to optimize their advertising strategy.

Tax preparation and filing can pose quite the challenge, and having a software that helps you accurately determine and manage your tax liabilities can be a game-changer.

According to Exponential, more and more people in the U.S. prefer online tax filing or using a tax filing software, instead of relying on retail and walk-in tax services.

The 2018 NSBA Tax Survey found that one in three businesses spend more than 40 hours and $10,000 every year doing their taxes. Given that 67% of small business owners consider “paperwork to be one of the biggest tax concerns,” it comes as no surprise that most of them are migrating to third-party platforms to file their returns.

Today, the market is flooded with companies offering digital services, and software for individuals and businesses looking for an economical and timely way to file their tax returns. TaxAct and H&R Block, for example, are already big names in the industry.

In this post, we’d learn more about how these two companies spend their advertising money and get a detailed understanding of their frequently used campaigns, creatives, publishers, landing pages and more.

TaxAct
Founded in 1998, TaxAct offers a software package to professional partners, individuals, and companies, allowing them to file their state and federal tax return easily with a helpful, step-by-step guide.

In 2000, the company launched a cloud-based version of TaxAct before selling two-thirds of the ownership stakes (worth $89 million) to TA Associates, a Boston-based private equity firm, in 2004. Finally, in 2012, TaxAct was sold to Bluecora for $287 million.

The company is now pursuing new growth opportunities by investing in small business and mobile products.

Let’s take a closer look at how paid advertising is helping them achieve their targets:

Ad Spend and Ad Networks
In the last 6 months, TaxAct has spent a whopping $5M on ads, with the majority being dedicated to Google ($2.4M) and $1.4M going towards Direct Buys. In the United States, the Federal individual income tax returns are filed with the Internal Revenue Service (IRS) every year by April 15. As a result, companies like TaxAct tend to double down on advertising between January and April, in order to attract customers looking to file their returns without having to jump through multiple hoops.

TaxAct’s ad spend has been $4.2M in the last three months alone (Jan: $1.3M, Feb: $1.8M, March: $1.1M) which means, they’re capitalizing on the current tax season to get as many conversions as possible. 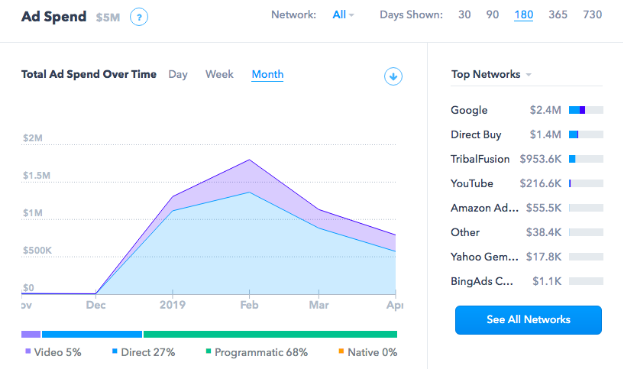 TaxAct is also one of the many companies that have added programmatic ad buying to their overall marketing strategy.

Side note: Programmatic ads lead to better targeting of potential customers and 508% more conversions than pay per click (PPC). As a result, advertisers in the U.S. are expected to spend almost $69 billion in programmatic display advertising.

Sixty-eight percent of TaxAct’s ad spend goes towards programmatic ads, and the remaining is dedicated to video ads (5%) and direct ads (27%).

Publishers
Most of TaxAct’s ad spend in the last year has gone to the same publishers—CBS Local, Merriam-Webster, YouTube, Wikia, and SpanishDict. Additionally, they also advertise on Reddit, AZLyrics, Urban Dictionary, ESPN, Yahoo, and Life Hacker, amongst other platforms. 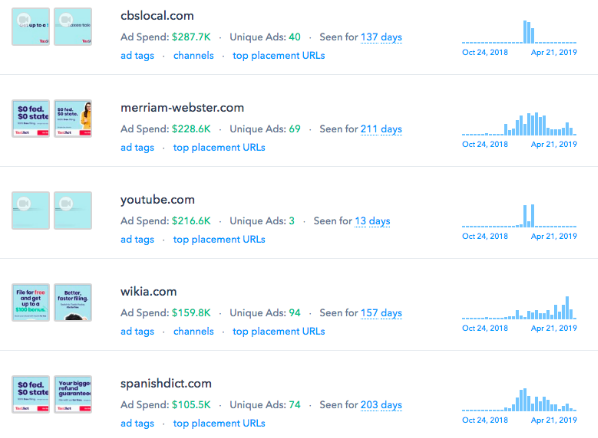 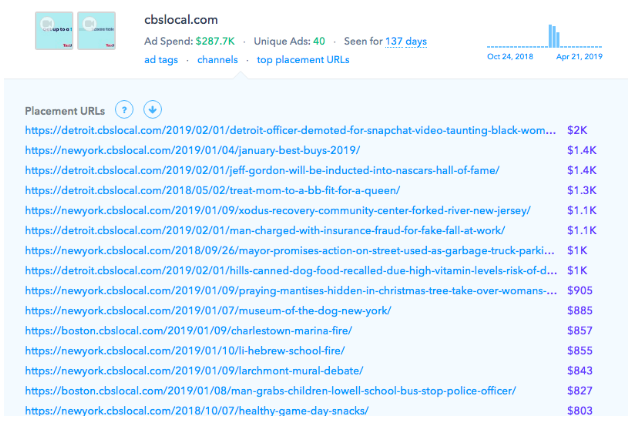 With Merriam-Webster, TaxAct adopts a more contextual targeting strategy and spends a significant amount to advertise on the ‘legal’ section of the dictionary that includes several terms related to taxes. Someone looking up the definition of ‘tax credit’—especially during the tax season—will be more interested to know what TaxAct has to offer. 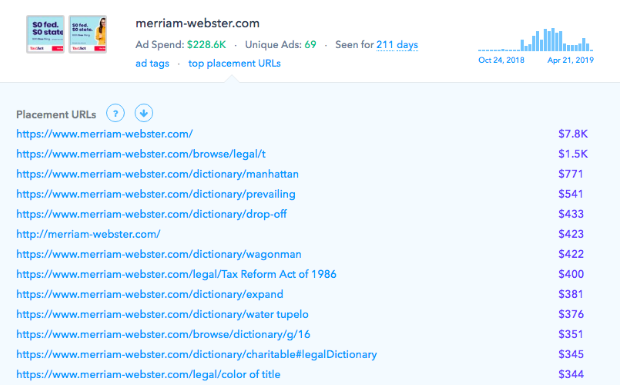 Similarly, on SpanishDict, in addition to advertising on the homepage, TaxAct also ensures that their ads appear on the ‘translate’ section of the website for commonly searched terms like, ‘Happy Birthday’ and ‘I miss you’ which most likely get a higher traffic than the rest of the pages on the platform. 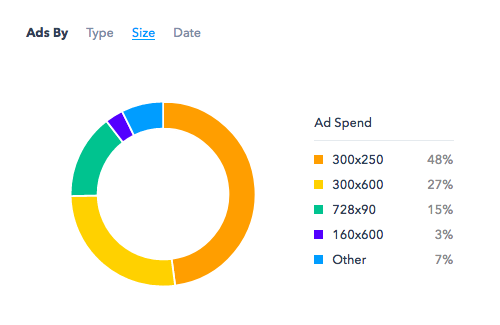 The copy is short, crisp and conveys the exact USPs of Taxact. For example, by using attention-grabbing terms and phrases like, ‘$0 filing’ and ‘Your biggest refund guaranteed’, the company is putting themselves in their customer’s shoes and speaking directly to the questions, reservations, and concerns they have about online tax preparation. 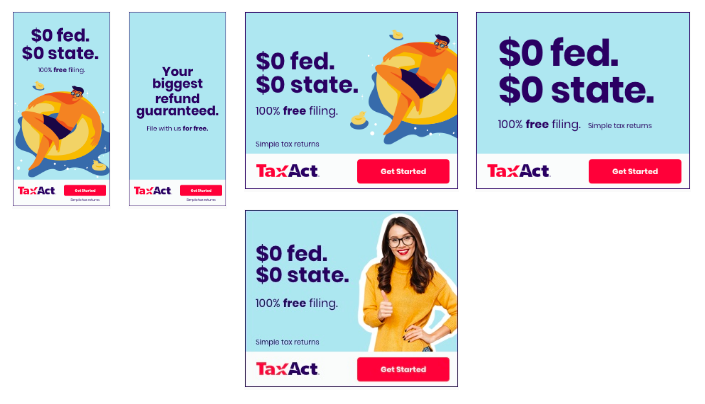 The bright orange/red CTAs stand out in the creative and encourage more click-through rates.

Landing Pages
All TaxAct ads lead to their homepage where the customers can find more details about the pricing plans and services they offer. The copy is short, to-the-point, and effectively communicates the value proposition that the company has to offer. For example, the landing page opens with the following sentences—‘Simple federal filing for free’ and ‘Get your biggest possible refund fast’. They immediately capture the customer’s attention and conveys exactly how TaxAct can be of help. 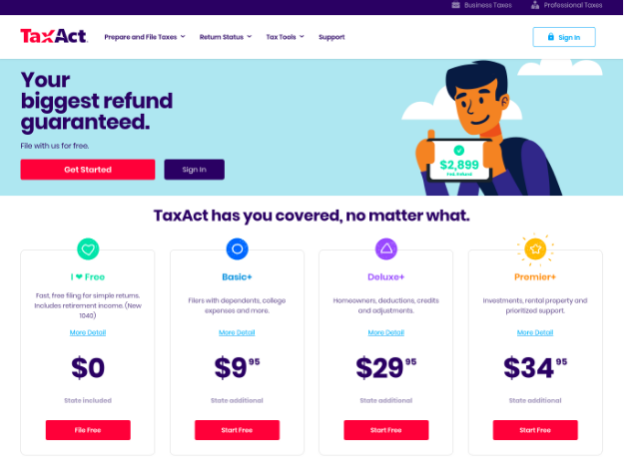 The CTA buttons that appear throughout the landing page highlight the primary USP of the product—file your tax return for free—and encourage the customer to ‘take action’. 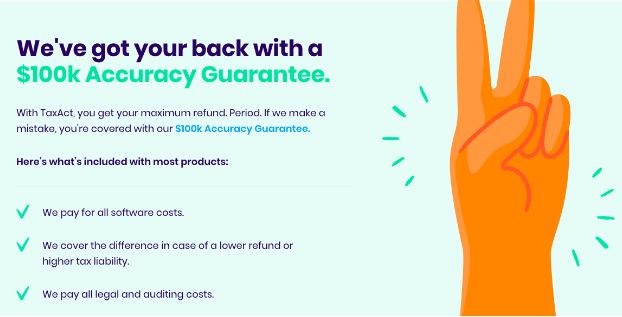 The landing page also mentions TaxAct’s $100k Accuracy Guarantee policy that helps assuage fears and buffer the notable uncertainty that a prospect might have about the company.

H&R Block
Founded in 1955, H&R Block offers a wide range of tax preparation and electronic filing services that help individuals and businesses get the maximum refund. With approximately 12,000 retail tax offices across the United States and the world, the company has globally contributed to 800 million tax returns since its inception.

In 2018, the company reported annual revenue of more than $3.1 billion. Over the years, H&R Block has invested in numerous high-profile marketing campaigns—the most notable one being the television commercial featuring NBA player Anthony Davis and Mad Men actor Jon Ham.

Let’s take an in-depth look at their overall advertising strategy:

Ad Spend and Ad Networks
In the last 6 months, H&R Block has spent $4.6M on advertising with the majority being dedicated to Google ($2.3M) and $1.7M going towards Direct ads. In lieu of the tax season, the company’s ad spend in the last three months alone has been $3.8M (Jan: $1.1M, Feb: $2M, March: $768.5K). In fact, H&R Block primarily runs ads only from January to April every year. 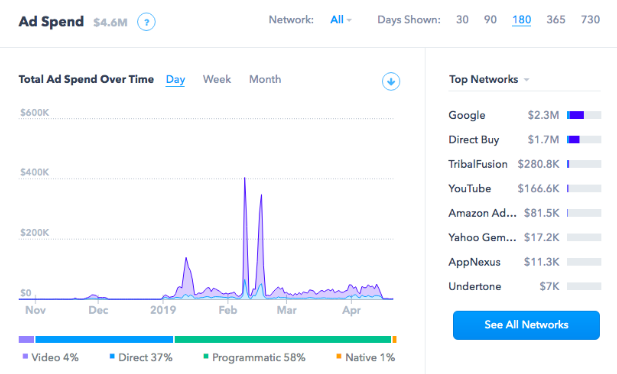 On Page Six, the company seems to invest more money on specific tags, for example, Jeff Goldblum ($7K), New York City ($5K), Rappers ($5K), BAFTAS ($2.6K), and Gal Gadot ($2), amongst others. It’s safe to assume that these tags probably get most of the website’s traffic and/or are frequently clicked on by people who H&R Block wish to target. 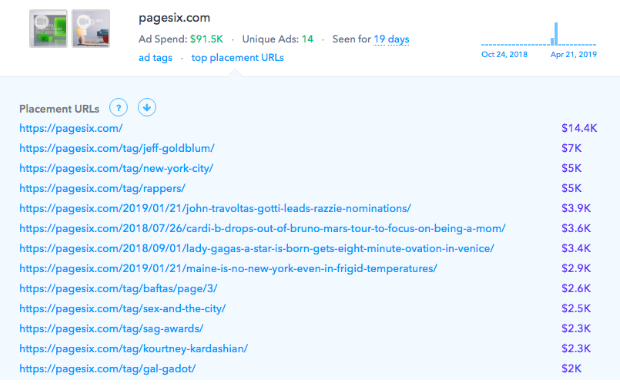 Similarly, on The Hill, the company pays more for their ads to appear on the ‘policy,’ ‘senate,’ and ‘administration’ news categories, instead of the homepage.

Creatives
H&R Block has experimented with a variety of advertising creatives in a possible attempt to figure out what their audience is the most responsive to.

During NBA games, they run the following ad on popular sports platforms like Bleacher Report, NCAA.com and CBS Sports to attract customers following the scoreboard. With seasonal campaigns like this, H&R Block was able to connect with their target audience by joining an ongoing conversation about a trending topic.

In another ad creative, the company ran a promotion, wherein they offered a 5% bonus to customers who put some or all of their refund on an Amazon gift card. Customers are more likely to engage with a business when they receive a discount or a special bonus for converting. After all, who doesn’t like free stuff? Moreover, this ad was published on Amazon, which means, the company was able to tap into Amazon’s customer base and offer them an incentive to file their returns using H&R Block.

Apart from A/B testing their ads,  H&R Block’s creatives also feature compelling copy, and actionable CTA’s that are pretty much icing on the cake.

Landing Pages
The first thing that a potential customer sees when they visit the H&R Block landing page is the different pricing plans that the company offers and the services covered in each of them.

For the best possible outcome, Hubspot recommends using CTA buttons of a color that starkly contrasts with the background of the landing page. In H&R Block’s case, the green buttons ‘pop’ easily against the white background to capture the customers’ attention and persuade them to sign up.

A common mistake that companies make while designing a landing page is adding SEO-based links throughout the content which make navigation harder and distract customers. The landing page of H&R Block is carefully optimized to include links that are absolutely necessary and promote conversion. 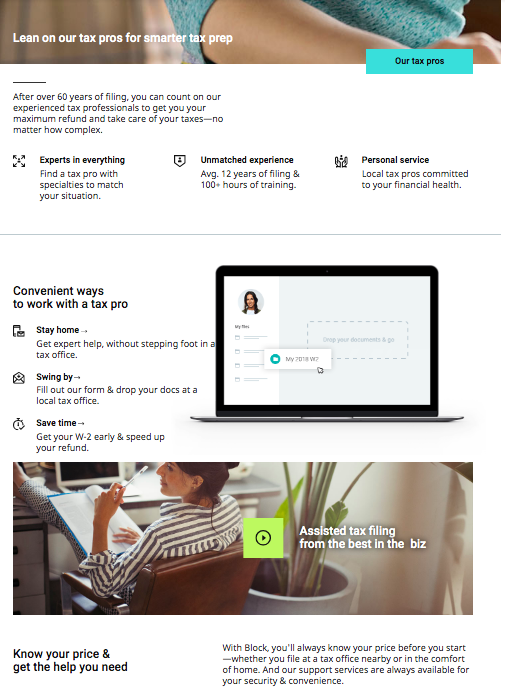 The landing page copy closely aligns with their campaign copy, so the customers don’t feel misled or ‘duped’ when their post-click experience is vastly different from the pre-click one.

Conclusion
Both TaxAct and H&R Block run most of their ads during the peak tax season. Since most people are looking into online tax preparation and filing solutions at the same time, they’re more likely to get their ad spends’ worth.

By investing their money in the relevant categories, topics, and tags on the publishers’ platform, TaxAct and H&R Block are rightly using contextual targeting to their advantage. After all, someone from their target audience will be more open to engaging with their business after coming across one of their ad campaigns. So, why not show your ads to customers who’re most likely to convert?

With a distraction-free UX, meaningful content and strategically-placed CTAs, the landing pages for TaxAct and H&R Block have been designed for optimal conversions.