How Groupon is using most of their $65.8M ad spend on video ads to successfully increase conversions.

Chicago-based Groupon was launched in 2008, and offers an eCommerce marketplace for people looking to purchase vouchers and coupons for a diverse range of local activities, goods, and services. Whether you fancy a cruise vacation, a romantic dinner or a manicure, you can simply use the platform to discover the best deals, discounts, and offers available around you.

With 48.2 million active customers, the company currently operates in 15 countries and generated a revenue of US$2.84 billion in 2017.

In 2011, Groupon created an online app (195 million downloads) that leverages a user’s geolocation to find the best deals in entertainment, travel, home improvement, beauty, food, and other personalized activities. By March 2018, 72 percent of all their sales were taking place through a mobile device.

In an interview with Jimmy Kimmel (2018), Tiffany Haddish shared an anecdote about using Groupon to book a swamp tour for herself, and her co-star Jada Pinkett Smith. After the segment went viral, the company signed the actress for a Super Bowl commercial depicting Haddish as a savvy shopper who supports local businesses and saves money by using Groupon. Within 8 days, the ad amassed 7 million views on Youtube, helping Groupon build a stronger brand presence, and increasing sales momentum.

At the same time, the company worked with SocialCode, the marketing agency that spearheaded successful social media campaigns for brands like Toscano, VISA, and Michael Kors, to run video ads across Facebook and Instagram. Groupon also used Google to run similar paid search campaigns across the web built around long-tail keywords.

With Haddish, Groupon tried to undo the PR disaster caused by their 2011 Super Bowl commercial starring A-list celebrities like Cuba Gooding Jr., Elizabeth Hurley, and Timothy Hutton. While each ad began with the premise of supporting a noteworthy cause (wildlife conservation, saving the rainforests, the Tibetian crisis), the pitch quickly and abruptly moves away from their initial message to plug Groupon.

For example, Hutton starts off his commercial by announcing, “The people of Tibet are in trouble. Their very culture is in jeopardy,” before saying, “…but they still whip up an amazing fish curry and since 200 of us bought at Groupon.com, we’re each getting $30 worth of Tibetan food for just $15 at Himalayan Restaurant in Chicago.”

The commercial (that Groupon reportedly invested $3 million in) sparked an immediate controversy post-airing, with a vast majority of people agreeing that it “missed the mark” and was ‘distasteful’. Eventually, the company axed the entire campaign and shifted their advertising strategy to focus only on display and search ads, instead of TV. That’s before the Haddish opportunity fell into their lap.

According to Craig Rowley, Groupon’s new CMO, the company is preparing for a big change in 2019, where they’re “moving away from the vouchers of the past” and “building a true global marketplace with new partners and a broader selection of local services and experiences”. By partnering with nationally renowned brands like Costco, AMC theatres, Sam’s Club, TripAdvisor, and Pandora, alongside the local mom-and-pop stores, Groupon is all set to mature into a platform where users can buy tickets, order food, discover branded experiences and earn rewards on repeat purchases.

Rowley further clarifies that the company will be revising their media spend, and will be investing more on YouTube and cinema advertising this year. He also believes that they haven’t been as aggressive with social media marketing as they should be—something that they plan on fixing in the near future. “A lot of the marketing and the idea behind how the brand is going to be served up, it’s going to shift to incorporate more of those things and really play out the idea that we are a true local marketplace,” he said.

Ad Spend and Ad Networks
In the last 6 months, Groupon has spent a whopping $65.8M on online advertising, with the majority going towards Direct Buy ($63.4M), where the company negotiates with a publisher (for example, ESPN or CNN) to purchase advertising space. 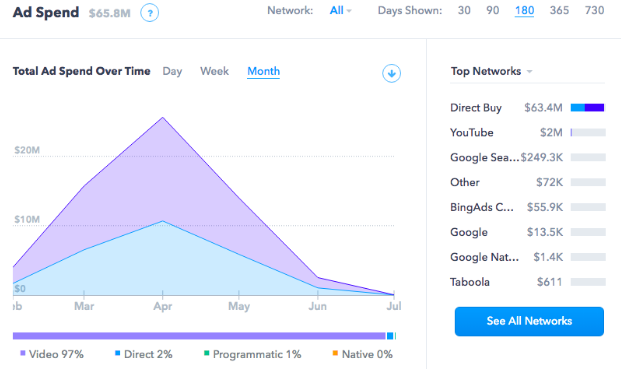 Apart from the pricing, an advertiser can decide the ad placement, copy, and even the exact duration the ad will run for. As opposed to programmatic ad-buying where you have the option of contextual targeting, direct ad-buying relies entirely on getting traction from the publisher’s audience. This explains why successful direct ad-buying is all about choosing relevant publishers that have the kind of audience you’re trying to attract. 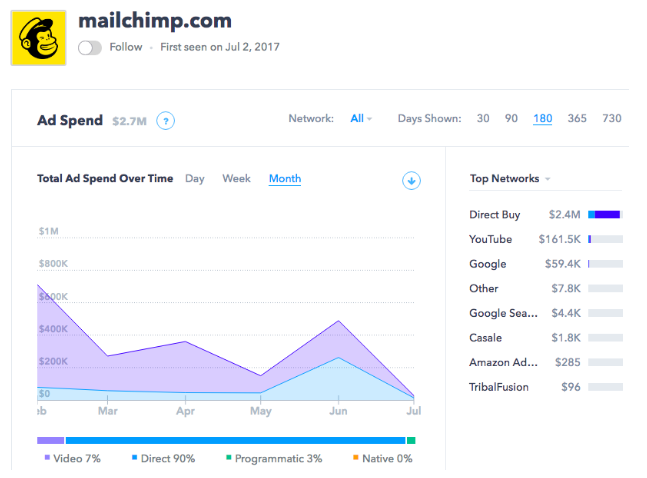 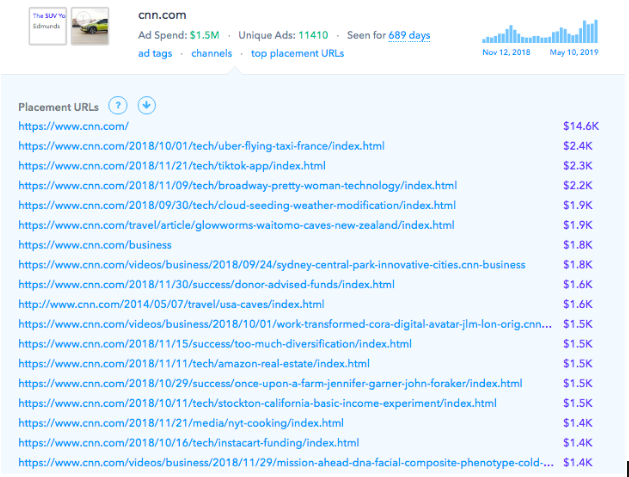 Groupon also has a hefty budget dedicated to YouTube ($2M), and Google Search Partners ($249.3K), with very little money going towards Google Native ($1.4K), Taboola ($611) and Outbrain. This explains why 97 percent of their ads are video, and almost none are native.

On the contrary, while RetailMeNot, Priceline, and Ebates, direct competitors to Groupon, also invest heavily in direct ad-buying ($10.3M, $9.2M, and $3.9M respectively), video ads are not an integral part of their advertising strategy. Another thing that sets Groupon apart is that the company consistently advertises on both mobile and desktop, whereas, the others have been partial to mobile.

Publishers
Groupon’s top three publishers have remained the same for the past year —Youtube ($64M), Yahoo ($150K), and Target ($87.9K). In the last 6 months, they’ve moved away from Imgur and Best Buy and currently advertise with Coolmath Games ($85.3K) and Addicting Games ($76.3) instead. 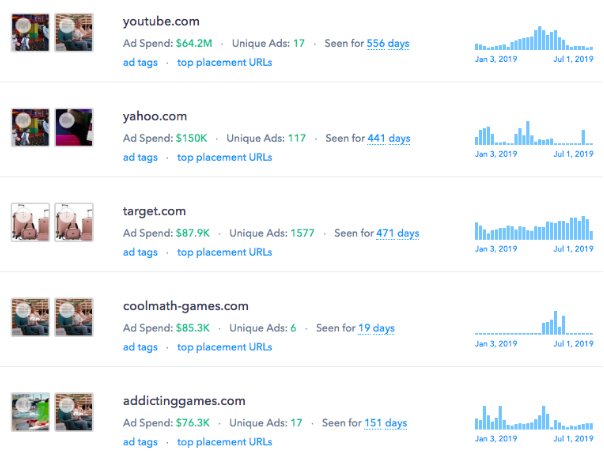 On Youtube, their ads appear on videos that are either trending or belong to channels that have a large subscriber base. For example, they spent $3M advertising on this video with 714,699,284 views on a channel that reviews kids’ toys. While the video and the channel are not directly relevant to Groupon as a brand, the channel’s 31M subscribers guarantee that the video will be watched by a substantial number of people—including the ones who might be interested in what Groupon has to offer.

Similarly, another video that Groupon spent 1.8M on has been viewed 107,237,427 times and is posted by a channel with 633K subscribers.

On the other hand, most of their ads on Yahoo are featured on the eCommerce section of the website—and specifically on pages selling mp3 players which probably get substantial traction. 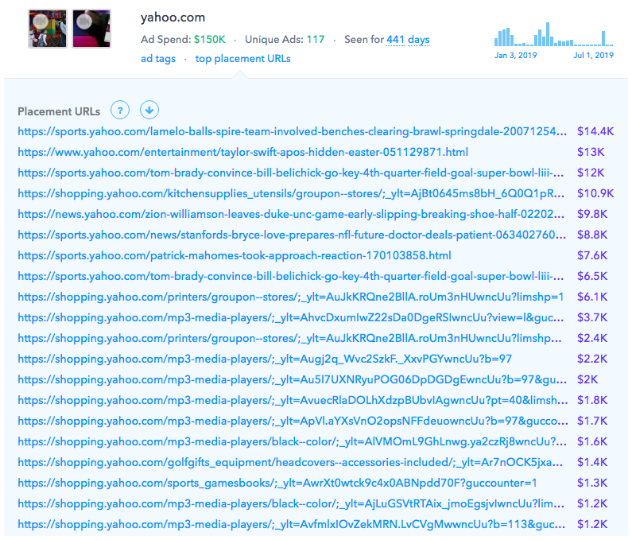 Overall, it’s safe to conclude that Groupon prefers advertising with publishers that are raking in a significant number of visitors every month, so their campaigns are seen by as many people as possible. They’re not putting much effort towards reaching the right people by using advanced targeting parameters like a lot of brands—and that seems to be working out for them at the moment.

Creatives
As we discussed earlier, 97 percent of Groupon’s ads are video, whereas, the remaining 3 percent are a combination of text, image, text/image or HTML5 type ads. 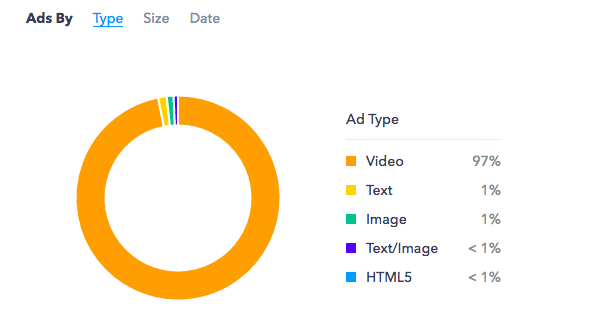 In the last 6 months, the company has run :06, :15, and :30 second-long video ads featuring Haddish, where their primary focus has been remarketing to customers who’ve visited their platform but not made a purchase, and reaching out to past customers who have not returned to the platform in a long time. They’ve also used Facebook’s Lookalike Audiences tool to find potential customers who share the same characteristics as their existing customer base.

Just because Tiffany Haddish is a big time celebrity doesn’t mean she doesn’t like to save up to $100 a week on what she does every day with Groupon.

The snippets put Haddish’s comedic chops on display, as she covers a range of Groupon offerings including restaurants, nightclubs, spas, or playtime for the kids. All of them follow a similar format, where the beginning is light-hearted and relatable, and the ending is witty, charming and might even get a laugh out of you. For example, in the ad titled Foodie, Haddish is talking about using Groupon to check the ratings and reviews of a restaurant before making a reservation while her friend is busy clicking pictures of the food to post online. Towards the end, the actress digs into the food (seemingly ruining her friend’s picture!) and asks the friend to friend to, ‘Just get done with it already!’

We all have that one perfect, but a mildly annoying friend (like Haddish’s), who insists on clicking pictures at the table when everyone just wants to eat their food in peace. While using this common occurrence as a backdrop, Groupon quickly gives you a rundown of how to use the platform to save money as part of your everyday routine. As a result, an average user is drawn in by the relatability, but decide to stay long enough for endless services that Groupon offers.

Landing Pages
Most video ads lead to Groupon’s homepage, where they use geo-targeted segmentation to automatically set up your location and showcase several ‘things to do’ in your area to choose from—some of which are available at a reasonable discount.

When talking numbers, it’s always advisable to clarify exactly what the said numbers signify. Rather than suggesting that you’re offering 33 percent off to the user, try showing them how the discount will affect their final transaction amount. For example, instead of telling you about the discount you’re getting on a product, Amazon shows you the current price, the original price, and the cumulative discount in absolute figures.

Groupon does something similar (as shown below), that’s been working in their favor: 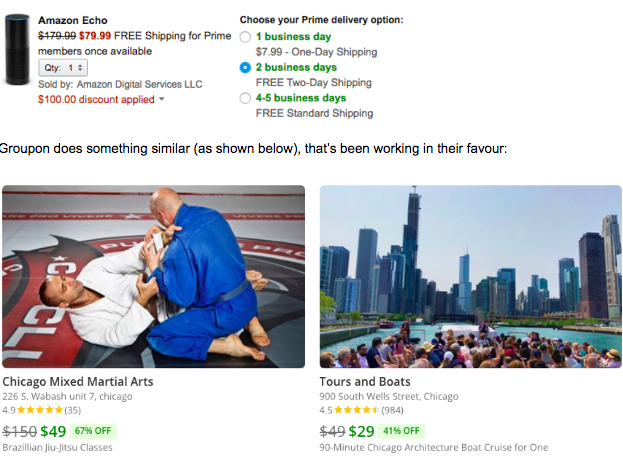 On scrolling further, you’re greeted with a pop-up that features a bold value proposition statement (like, “70% off on 1000s of Chicago deals”) and encourages you to enter your email address. 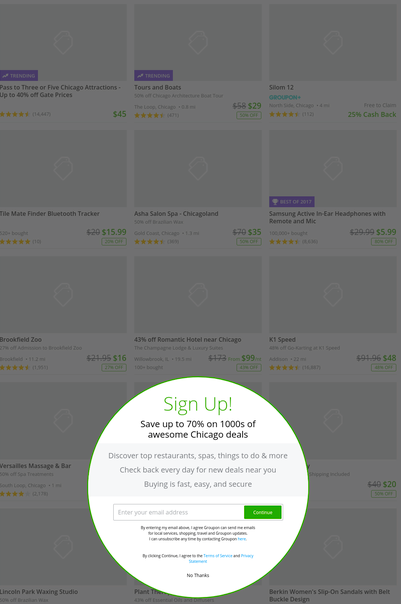 Instead of promising you a vague and superfluous benefit (for example, “this product will change your life”), Groupon has decided to keep things simple, and straightforward with their copy. After all, they’re not here to convince you to grab your credit card for an extravagant purchase; they just want your email. Going for a lengthy copy for a low-friction task, such as this, would be incredibly wasteful.

In just three lines, they’ve been able to convey the primary USPs of their product, which goes to show how brevity can be a game-changer for brands looking to drive conversions.

That being said, there are also video ads that direct potential customers to a “Save With Tiffany Haddish” page that claims to feature deals that’re inspired by the actress herself. From an average person’s point of view, the transition from the Groupon ad to the landing page below is much more seamless because Haddish serves as a constant theme. 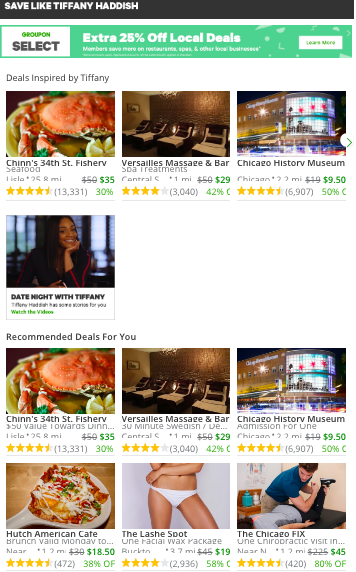 Everything else, including the layout, the email pop-up, and the copy, remains pretty much the same as the landing page we discussed previously.

In today’s fast-paced, and mobile-heavy market, video content and Youtube should be an integral part of your online ad strategy. The reach is too enormous to ignore, the price is too flexible to pass up, and the emerging attribution models are transforming video campaigns to have a measurable impact on your bottom line.

Unlike most brands that are hesitant to dip their toes into YT advertising, Groupon has managed to successfully churn out video content that resonates with their target audience—and ultimately, leads to more conversions.

For marketers working up towards their first big advertising campaign, they’ve also managed to set an excellent example. After their first commercial campaign wasn’t received as well as they hoped, they went on to make a groundbreaking comeback last year that continues to pay off even today.

Additionally, instead of tweaking their campaigns to attract people that match with their customer persona, they choose to advertise with publishers that can simply deliver their marketing message to a large audience. Given that they’ve stuck with the same three publishers in the last year, we can assume that they’re aware of the publishers that consistently yield positive campaign results.

From the lack of investment in native ads to dedicating most of their ad spend to video ads, Groupon’s advertising strategy might come across as unconventional in the present landscape. However, it seems to be working exceptionally well for them.