How brands like Panera, KFC, and Pepsi are leveraging mobile ads to attract high-quality customers (and why you should, too!).

The marketing world is dynamic and ever-changing — trends, technology, and tactics are never stagnant. That’s why it’s critical that your business stay up with new developments in the industry.

Currently, more than 51% of smartphone users admit that they have discovered a new company or product while conducting a search on their smartphone. As a result, it comes as no surprise that brands everywhere are looking for new ways to engage with their audience on the small screen.

According to a recent study, mobile ads start triggering an emotional response in consumers in less than half a second, pointing to how brands must develop a “one-second strategy” for their creative and media-buying efforts. In fact, consumers reacted more slowly to ads seen on desktop computers, which took two to three seconds to pose the same emotional effect.

Why does mobile advertising work for brands?

Opera Software found that the average cost for mobile ads for an iPhone, which has the highest average cost per thousand impressions (CPM), is still less than the CPM for web ads on a desktop.

On the contrary, print ads, for example, can charge as much as $100 for a thousand impressions.

The rapid increase in the number of mobile apps and the swift growth of mobile audience on traditional websites has resulted in an abundance of mobile ad inventory on the market. A common misconception here is that mobile ads are usually lower in quality, however, according to an eMarketer report, the click-through rates (CTR) are actually higher on mobile. There’s simply not enough demand in the marketplace for mobile ads right now—something that’s bound to change as we step into 2020.

For example, OLX, a global online marketplace, were able to acquire high-quality customers at 50 percent lower costs by running a relevant and impactful mobile ad campaign. The biggest challenge for them was consolidating their online presence and encouraging users to buy/sell using the OLX app on their smartphone.

Using contextual targeting across all Android devices, and creative, video-first optimizations, they observed a 2.5x increase in conversions, a 50 percent reduction in cost per install (CPI) and a 25 percent reduction in the cost of driving a high-quality user listing within the app. 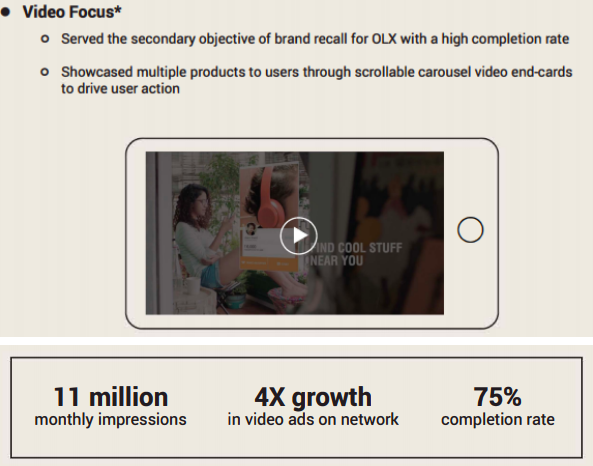 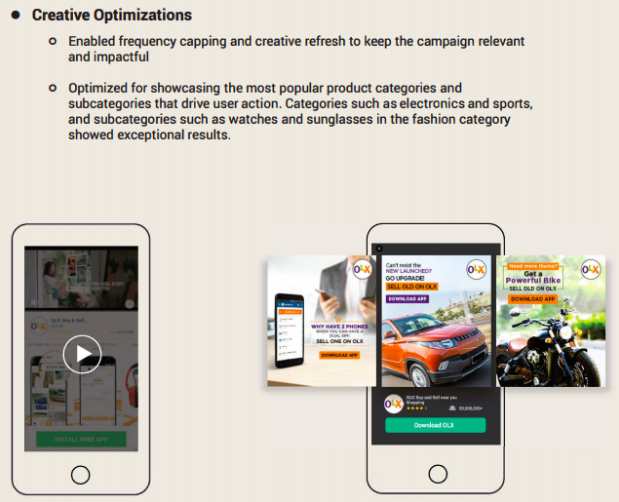 There are several ways in which you can market your business using mobile advertising. For example, if you don’t have an app, but your website is mobile-optimized, you’d be better off investing in mobile search or display advertising campaigns.

The most popular mobile ad networks come with self-service portals that are designed to drive test campaigns. Google is the main player when it comes to mobile display ads. Outside of the US, InMobi and Adfonic are both great choices. 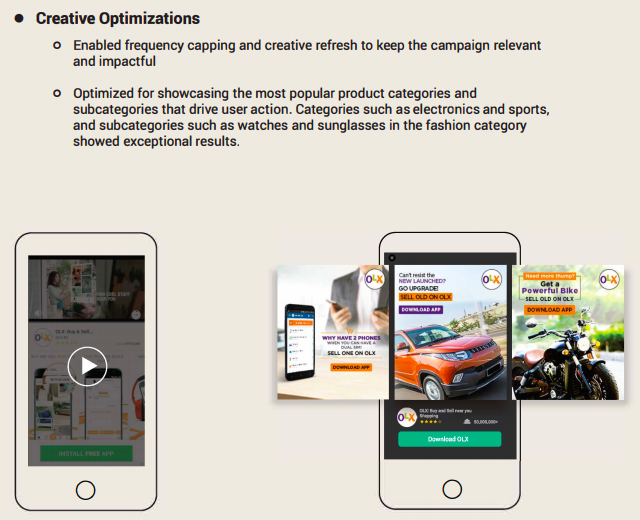 While ensuring that your mobile ad campaign really works might take more effort than you initially expected, the low cost of the inventory makes it all worth it in the long-term.

AR promises an innovative, engaging, immersive experience on mobile:
Augmented reality (AR) has successfully become the buzzword people can’t stop talking about in the world of technology. While it’s hard to find someone who’s never come across Pokémon GO, the best selling AR mobile game that has millions of users across the globe, it’s important to understand that AR isn’t just about gaming and entertainment.

AR continues to surprise us with its ever-growing list of potential applications that many industries, advertising included, have benefited greatly from.

AR has not only made advertising more interactive than ever before, but it also allows marketers to reach out to their target demographic in completely new ways. For example, Pond’s, a brand well-known for their healthcare and beauty products, partnered with InMobi to develop the “world’s first face detection augmented reality rich media mobile ad” that delivers a unique, immersive brand experience to customers.

Given that the market is already saturated with face products, Pond’s knew they could only stand out by trying their hands at something wildly different. In order to promote their new Acne 10-in-1 Solution, the company chose to target prospects where they were spending most of their time: looking at their smartphones. By using a flurry of relevant filters, Pond’s created a personalized ad that doesn’t prompt people to download a third-party app/software or visit another website.

When users switched to the front-facing camera on their phones, the AR tracked their facial features and automatically identified the various acne-prone areas of their skin.

Most people keep their smartphones handy throughout the day. As a result, you don’t have to wait for them to get on a desktop with internet access, or notice a physical display, or tune in to TV commercials to promote your brand.

With mobile ads, you can follow people even when they’re on-the-go. In short, you have round-the-clock access to your customers. The biggest advantage here is that time-sensitive communication, like notifications related to sales and special events, can reach customers without any delay. There’s no other advertising medium that gives you the benefit of being “always-on”.

By tailoring your marketing message to the expectations of your mobile audience, you can convey a sense of intimacy that would act as a catalyst for building long-standing customer relationships. For example,  location-based ads, for example, are more productive than desktop, as they let you customize your campaign based on the geographical location of your target customers.

Imagine a person strolling through a shopping district while on vacation. They’re going through their phone and come across an ad for an ongoing sale on handbags from your brand. On clicking the ad, they’re able to see your store location (that’s 500 meters away) and simply follow the directions to get to your store.

Alternatively, consider the following scenario: It’s lunchtime and a potential customer is on their phone. They see an ad from a restaurant nearby that includes a free dessert coupon. Here, the restaurant is running a contextually targeted ad, that’s possibly geo-fenced within a 2 km radius of the business bay with all the offices. They’ve also added a “Call Now ” button on the mobile ad that the customer can click on to order or make a reservation.

In 2015, KFC used geofencing on mobile to promote their new burrito range and boost foot traffic into its subsidiaries.

During market research, the fast-food giant found that “KFC stores had a click-through rate of 40 percent above the industry standard” which is a testament to the impact of location-based targeting. As a result, the company was able to build awareness around KFC outlets across the UK simply by using relevant messaging tactics alongside proximity targeting.

In another example, the NFL installed a complex micro-location beacon network in the MetLife Stadium (NYC) and Times Square (London) during the Super Bowl to send personalized ads to football fans.

Manish Jha, NFL’s general manager of mobile, emphasized the ability of beacon technology to “connect to the real world, the brick-and-mortar world, with the virtual world with a level of granularity that hasn’t existed before”.

Many major sports leagues including the NBA and MLB are all looking into implementing beacon technology in their stadiums to allow for increasingly personalized ad targeting as well as an enriched fan experience.

What’s next for mobile advertising?

According to the IAB Mobile Advertising and Revenue report for 2008 Q2, approximately three-quarters of the total Internet time (71%) is spent on a mobile device. Therefore, it comes as no surprise that mobile ad spends now accounts for nearly two-thirds of the total digital spend.

With a rise in the number of smartphones and tablets, mobile ads, by being both cost-effective and conversion-oriented, have become more commonplace.

As videos and augmented reality continue to evolve with time, the mobile advertising experience for both customers and brands is expected to improve by leaps and bounds in the coming years.