The Dark Side of Display: How “Fake News” Sites Monetize their Content

The 2016 Presidential Campaign was littered by fake news stories.

They gained steam on social platforms before being erroneously reported left-and-right by the real news media who didn’t want to miss a scoop.

When in reality, this nonstop media frenzy was being fueled by people with zero political ties (many times, from outside US borders), who were just looking to make a quick buck.

It got so bad that Google said they’d ban these websites, and Zuckerberg himself shared options Facebook was working on to flag and report them too.

But none of this is new.

In fact, it’s been going on for years.

And most of the ‘fake news’ stories you’ve probably read have only introduced the tip of the iceberg.

While the random, one-off teenagers have gotten the press, other more serious organizations have been hard at work building up ‘fake news’ media empires.

Here’s how the business behind ‘fake news’ works (and how much is at stake).

The Business Behind ‘Fake News’

“Nobody really believes that Mexico is going to close its border. This is crazy.”

The ‘Mexico border closing’ story Latsabidze is referring to reportedly brought in $6,000. Most of his articles however, bring in far less.

These clickbait-esque articles feature sensational, hyperbolic headlines that wouldn’t be out of place on BuzzFeed. The only difference being the truthfulness of the content.

Making ‘fake news’ work start with a kernel of truth. Find those trending ideas or topics and distort or exaggerate to reach the widest audience possible.

The Times points out that “Dying Hillary Says She Just Wants To Curl Up And Never Leave Her House Again After Defeat” does resemble the fact that Clinton reportedly say she wanted to curl up with a book after the election (except, you know, the whole “dying” part).

“I did not invent anything. It has all been done before.” he told the New York Times reporters.

In fact, ‘yellow journalism’ dates back to the 1800s, originally referring to a yellow cartoon strip that relied more on sensationalism than fact-based research.

Some fake news sites like Latsabidze’s also haven’t technically broken any laws (as long as they’re not infringing on other’s copyrights by copying and pasting their fake stories, which does happen a lot). Sites like The Onion are not fake news, because they are satirical in nature.

However, most fake news site are illegal, and we don’t condone these activities either. It’s not an honest business model. Fake news site neither provide value nor are the best way to build a solid business over the long term.

Some fake news websites are easy to spot, with blatant misspellings, poor grammar, or ugly design. These are the ones you’ve seen reported that get taken down almost immediately after getting ‘outed’.

However, others are going to great lengths to blend in and actually compete with major, existing media outlets.

For example, The Washington Post points out that abcnews.com.co is a complete ripoff of the real ABC News. 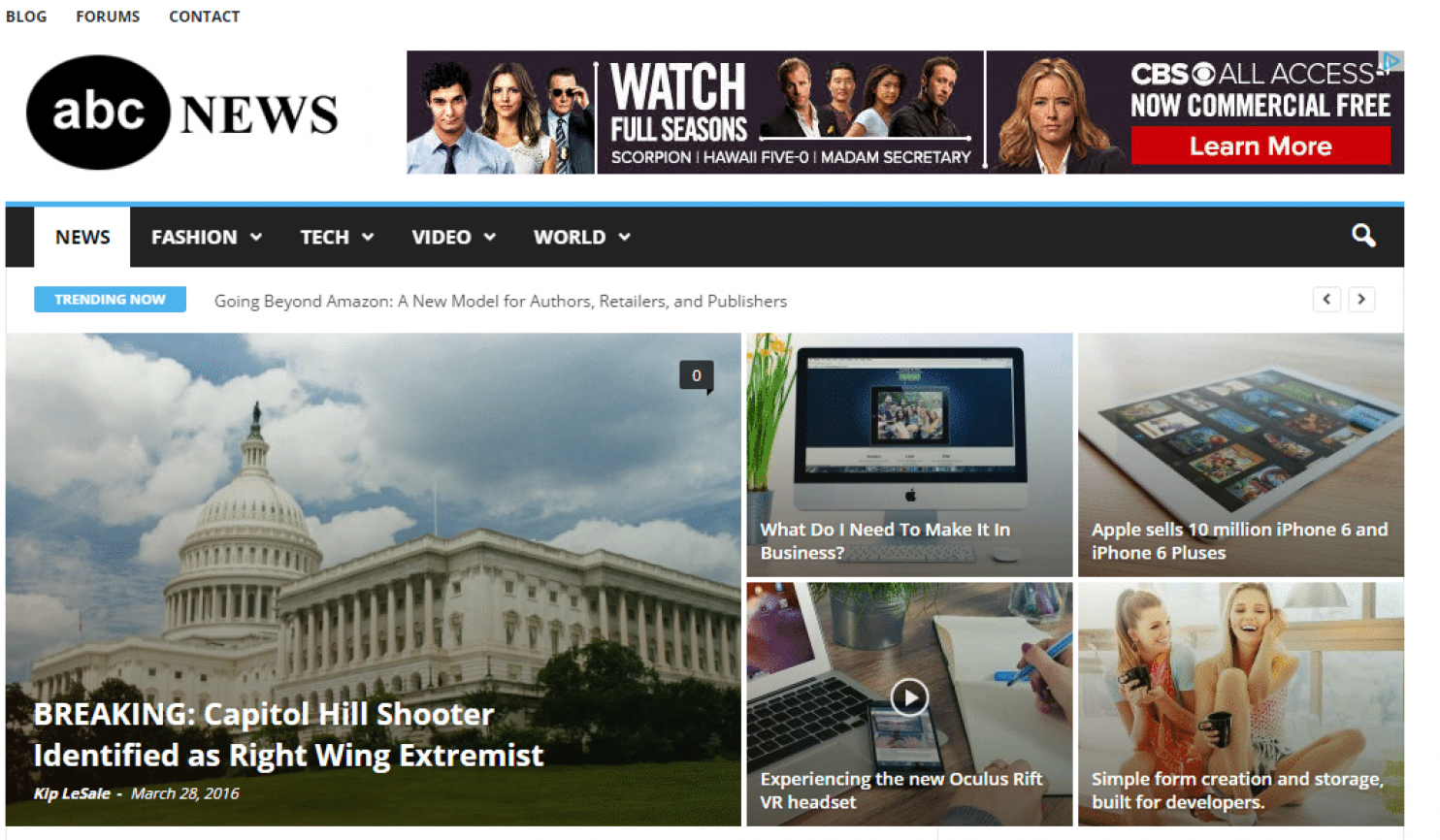 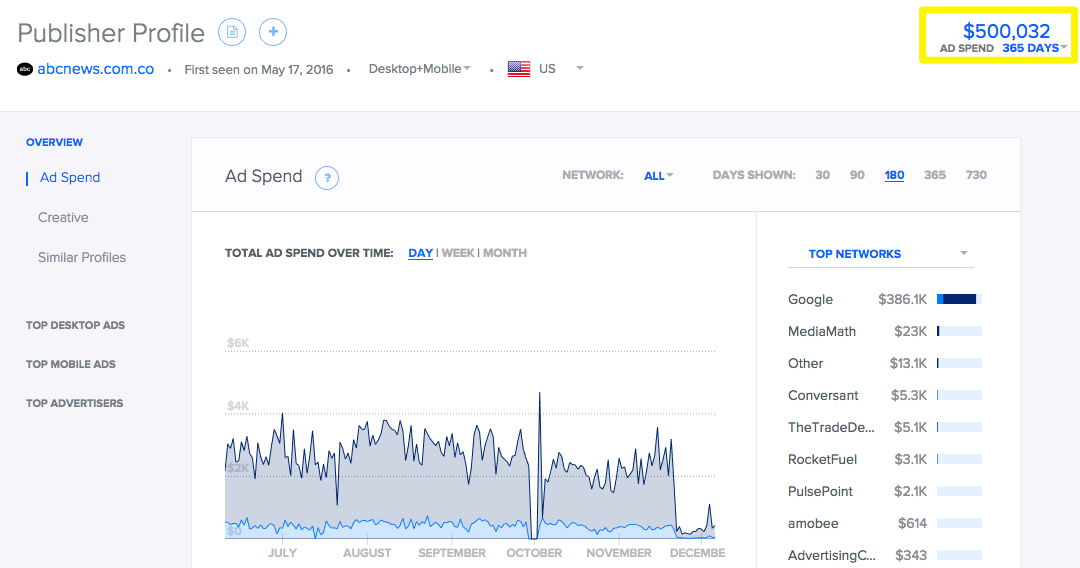 You can see from their Publisher Profile that mobile ads from Google’s network dominated the majority of that spend. 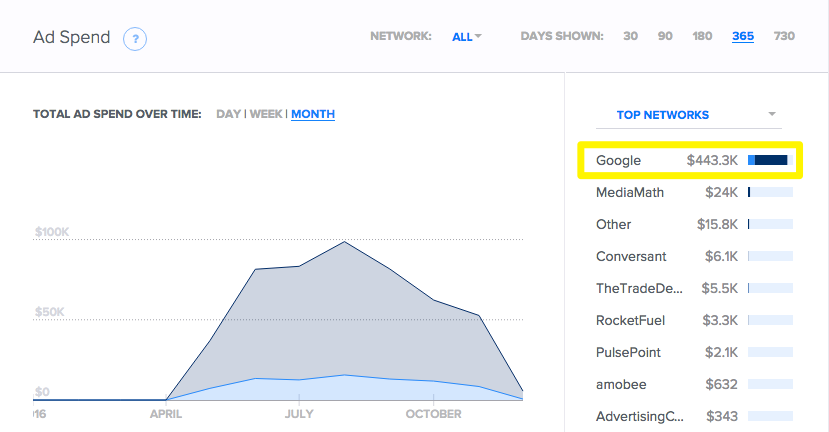 And when you dive deeper into the top advertisers buying inventory from them, you can see largely two article placements that have had their biggest success: 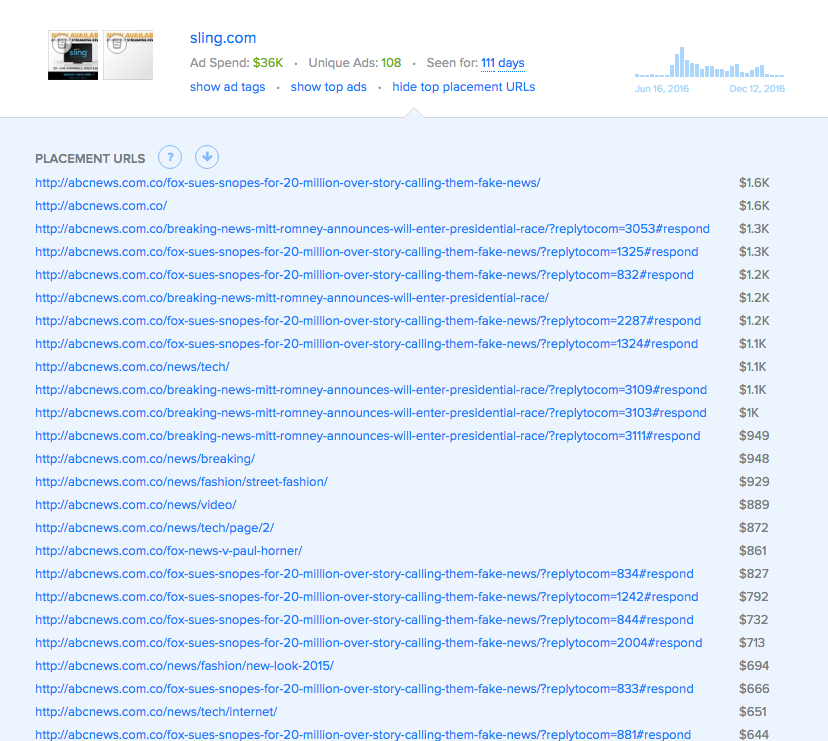 But it almost doesn’t matter how obviously fake some of these news stories are. It doesn’t really matter if you return or if you read the entire article.

The only thing that matters is if you click and visit their site.

“These people make money similarly to how we in the mainstream media make money,” according to Washington Post reporter Caitlin Dewey.

The most common source is Google’s own AdSense, which gives these publishers a few cents each time someone clicks and views an ad on their site.

One Facebook fake news writer told The Washington Post that they make around $10,000 a month. While BuzzFeed also reported on some Macedonian teenagers who successfully make around $5,000 each month.

The key is to create content that has the potential to go viral.

Sometimes, you can do that organically.

The best strategy that paid off though, was to get real people – like Trump fanatics or even the real media – to latch on to the stories and spread them to their own networks. Many times these people only relied on the headlines and didn’t even read the content, Latsabidze believes.

Currency arbitrage is a popular way to generate a “riskless profit” in financial markets. Your goal is to exploit price differences from one market to another.

For example, Australian Dollars are exchanged for Japanese Yen which are then exchanged for American Dollars. At the end of the day you make a few cents on the dollar. But applied at scale it all starts to add up.

This is no different than advertising arbitrage from different networks, where it costs $X to bring in traffic from Facebook and make $X+1 from Google’s AdSense.

We originally wrote about the ad arbitrage model in part 2 of our Business of Display series, Viral Quiz Sites and Click Arbitrage. The only difference is that the websites featured in that post are running a completely legal business.

Because sometimes though for fake news sites, AdSense might eventually catch on and shut their account down. Often they’ll employ multiple ad networks until one (or all) get shut down. As we mentioned before, this is NOT a good long-term business model.

But since some of these sites are so blatantly breaking the rules, you might wonder:

How do these sites fly under the radar for so long?

Many make their sites appear legitimate. This is how these sites stick around and keep their revenue stream taps from getting shut off. Many of the savvier operators use a variety of techniques, including clear disclosure pages and mixing in real stories or gossip.

At the end of the day, however, most of these sites fade away as ad networks and the FTC improve their detection mechanisms.

Fake news made waves this Presidential Campaign because of how it would find it’s way to national or international broadcasts.

As a result, some of the most popular platforms like Google’s AdSense and Facebook are trying to crack down.

It takes less than a couple hours to get a brand new site up-and-running, it doesn’t technically break any laws, and these fake news proprietors can often ‘fly under the radar’ by focusing on building evidence of credibility to net a few thousands bucks a month.

But this trend is anything but new.

And if history has taught us anything, it won’t probably won’t go away anytime soon either.