Breaking down HostGator’s $919.2K ad spend: How the web-hosting provider is using strategically-crafted campaigns to stand out from their competitors.

Founded in October 2002 by Brent Oxley (then a student at Florida Atlantic University), HostGator is a Texas-based provider of shared, reseller, virtual private server, and dedicated web hosting. By 2006, HostGator had crossed 200,000 registered domains and opened their first international office in Ontario, Canada.

In 2008, HostGator reached 100,000 customers and started offering unlimited space and bandwidth as part of all hosting packages. Just a year later, they doubled their customer-base and launched toll-free numbers for customers who opted for business-level hosting packages at no additional cost. At the same time, Inc. Magazine rated HostGator as one of the fastest-growing companies in the United States.

HostGator was sold to Endurance International Group (EIG) for $299.8 million in 2012.

Let’s take a closer look at their advertising strategy: 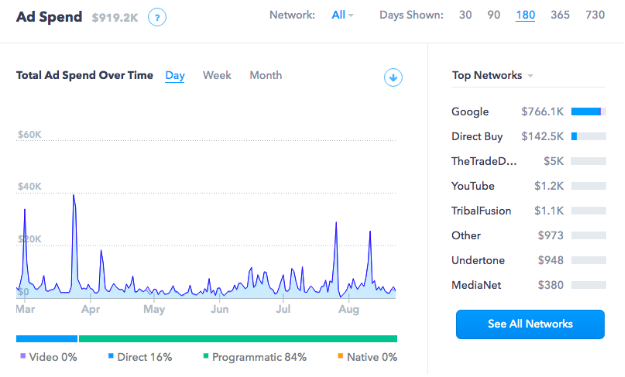 Given that 84% of Hostgator’s ads are programmatic, and the remaining 16% are direct, we can safely assume that the company prefers automating the negotiation and sales of the ads space for their paid campaigns—wherein, all crucial parameters like impression tracking, payments, and billings are handled by a third-party software/platform (for example, Ads Manager, in the case of Google).  By choosing a programmatic approach to ad buying, HostGator is able to save time, avoid any possible discrepancies related to creative management, and ultimately, optimize their overall campaign delivery.

If you’re using the Google Ads Manager for programmatic advertising, you can opt for either of the following options:

Despite the promising developments in the native advertising space in recent years, HostGator has little to no ad spend going towards the same—which comes across as an unconventional, but not a surprising move. While most brands have been fairly proactive in terms of adopting native ads to promote their products/services, a Contently report also found that marketers are often skeptical of going all out on native advertising because an average consumer doesn’t trust, or feels deceived by an ad that’s trying too hard to not look like an ad.

Overall, HostGator’s decision to stick with other forms of advertising seems like a strategic move that’s been working for them.

Publishers
Four (out of five) of HostGator’s top publishers have remained the same for the past year —Dictionary.com ($54K), Reddit ($42.5), Merriam-Webster ($27.9K), and Thesaurus ($34.5K). In the last 6 months, they’ve moved away from YourDictionary and currently advertise with CoolMathGames($20K), instead. 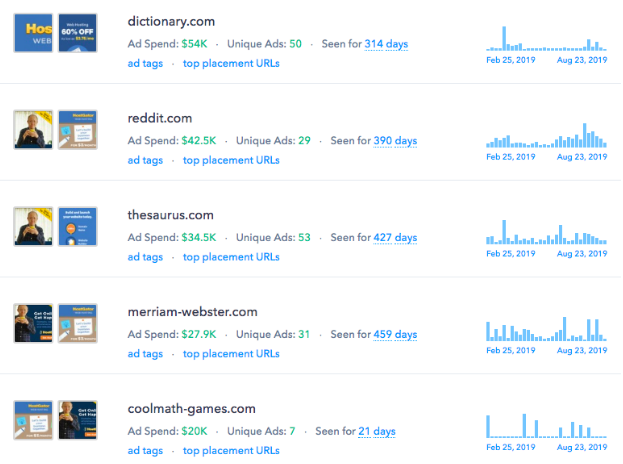 Most of their money goes towards ensuring that the ads appear on the homepage of the aforementioned publishers. Apart from that, there isn’t a specific placement pattern that HostGator adheres to, as their ads appear on arbitrary landing pages on all platforms. For example, on Dictionary.com, the company spent approximately $1.7K to advertise on pages that show the definition of the terms ECR, and neurogenic. On Reddit, their ads have appeared on communities related to Asian beauty, and gaming, among others.

Overall, it’s safe to conclude that HostGator prefers advertising with publishers that are raking in a significant number of visitors every month, so their campaigns are seen by as many people as possible. They’re not putting much effort towards reaching the right people by using advanced targeting parameters like a lot of brands—and that seems to be working out for them at the moment.

Creatives
Apart from images (97%), HostGator’s ad creatives are 3% text/image-based, with a few videos, text-only, and HTML5 ads sparsely thrown in.

Based on their most commonly-run ads, here’s what we think makes HostGator’s campaigns successful:

Almost all of HostGator’s campaigns redirect to their homepage, where the copy instantly tells the customer that the web hosting services offered by the company are powerful, easy and affordable.

In an attempt to impress a customer, a lot of brands tend to overload them with information, by using too many CTAs, and/or incorporate several navigation locations that have a negative impact on usability. HostGator not only embraces brevity with open arms, but also limits their navigation to the top of the page, and includes only the most important links—all of which contribute greatly towards maximizing conversions.

Additionally, the homepage also offers a live chat option that customers can use to get an immediate response to any queries they’ve related to HostGator’s offerings. Sure, they can always drop an email, call a toll-free number or fill out a contact form during the decision-making process, however, it’s important to remember that the customer’s likelihood to convert will most likely decrease with every passing second that a business takes to respond. An easily accessible, aptly-positioned, live chat fills that void, by offering an immediate line of communication to customers.

Even though the vast majority of the businesses are hesitant to test waters with programmatic, HostGator is eagerly reaping the benefits that the new-age advertising approach has to offer—such as increased transparency, real-time measurement, better targeting capabilities, and increased audience reach.

The company has discovered the exact elements that make for a successful campaign—their publishers, for example, that haven’t changed in the past year; their ad creatives that are consistently number-driven; and their homepage that features only one type of navigation.