An introduction to HTML5 rich media ads and why brands should invest in them.

In the early 2000s, Adobe’s Flash became extremely popular with the advertisers everywhere, as it was the first time they were able to create animated, and interactive banner ads—for example, micro-games that allowed users to throw a ball, punch a monkey or shoot at ducks, as shown below.

While they were successful in capturing the audience’s attention, eventually ads using Flash’s ActionScript programming language started experiencing numerous security breaches that resulted in frequently released patches and newer version of the plugin.

Since Flash is third-party software, people had to constantly update or even reinstall the plugin to not only secure their devices and browsers, but to also view any kind of flash files across the internet. For marketers, this meant trouble because they could never be sure if their ads were actually reaching their target audience. Not to mention, Flash drained mobile devices of their battery and consumed most of the resources on desktops.

In 2010, Steve Jobs famously called Flash “unnecessary” in the mobile era that’s all about “low power devices, touch interfaces, and open web standards”—and at the same time, encouraged companies like Adobe to focus on creating new HTML5 tools. Soon after, Flash was dropped from the Android platform and in late 2011, Adobe announced that they’re no longer updating Flash to be compatible with the upcoming mobile device configurations.

In 2015, Amazon suspended Flash ads on all of their platforms and recommended people switch to HTML5 instead. Google followed suit by automatically pausing Flash ads and converting them to HTML5 wherever possible. Finally, many prominent news publishers including Conde Nast, New York Post, Slate, and AOL released a manifesto-style letter urging advertisers to put Flash to rest and use HTML5 to promote their brand.


Fast-forward to July 2017 and Adobe finally announced that Flash will no longer be distributed at the end of 2020.

HTML5 is the first version of HTML (the language that’s used to create web pages) that lets developers write audio, video and other types of animations straight into the source code of any webpage. Apart from headers, footers, and sidebars,  HTML5 also makes it much easier for developers to produce content that displays properly on different browsers, screen sizes, and resolutions—making it perfect for creating ads that will be shown on a wide array of devices and screens.

For example, consider the following rich-media ads for Nike Airmax. Aren’t they much more attractive, and engaging than the Flash ad that we saw above?

In short—unlike Flash, HTML5 ads work seamlessly across smartphones, tablets, and desktop. You don’t need any proprietary plugins or software programs to create multimedia ads anymore. As long as you have an up-to-date browser, you will most likely not face any compatibility issues, and excessive battery or resource consumption.

HTML5 has proven to be a remarkable addition to the traditional banner ad game, considering that rich-media HTML5 ads boost the click-through rates (CTR) by 267 percent and offer brands a substantial uptick in performance.

Since they are embedded within the page, they’re more subtle, elegant, non-intrusive and less interstitial-y—which means, for an average user they obviously are a more attractive choice to engage with as opposed to static display ads. Not to mention, consumers today are experiencing “banner ad fatigue” that stems from the inability to differentiate the static elements on an ad from the static elements in your webpage. HTML5 ads are expected to get higher views and clicks because they tend to stand out (with short videos and gifs) from the rest of the on-page content.

Aside from the standard motion elements, HTML5 readily supports 3D and interactive ads that a user can play around with. They run seamlessly within the native applications and can be designed to be responsive in all kinds of webpage placements, browsers, and devices—thereby eliminating the demand to create individual ads separately for all of them.

For example, consider the following ad campaign that was created for Nike’s latest collection of sneakers that featured:

That being said—relevance is crucial for the success of a display campaign and considering that different people engage with different media and message types, it’s important that your ad creatives cater to everyone’s engagement preferences.

HTML5 allows you to create dynamic rich media ads that adapt to browsing behavior, location, purchasing history, or any other data that you want and have access to. For example, you can show certain products to customers over the age of 40, and an entirely different product-list to customers under the age of 40. You can even change any component of a dynamic creative, including exit URLs, call-to-action (CTA) text, images, content, and more.

Let’s consider the following ads by Skype that uses the same content, creative and offer value, but uses geotargeting to change languages while showcasing them in the U.S. and Holland.

Similarly, in Nike’s case not only wanted to create an animated HTML5 banner campaign that was “as innovative as their shoe”— but also wanted it to appear simultaneously across seven countries.

Using HTML5’s responsive cross-screen and retina ready technology, a compelling rich media ad was easily delivered to the U.K., Netherlands, Germany, Sweden, France, Italy and Spain—with the language undergoing a dynamic change to display the dialect of the target audience in each country/region. As a result, users were captivated by the experience and impact a simple HTML5 ad was capable of providing, and ultimately, Nike Free has a successful launch.

Now that we’ve made a strong case for personalized display advertising, and how you can boost your click-through and conversion by a huge margin by using dynamic creatives—let’s move onto the next big question every business has when presented with something new:

Fortunately, HTML5 is extremely affordable and accessible for companies that are already (or are planning to) work in-house, as it allows you to create and deliver rich media experiences with any third-party installation. As a result, you can fully embrace an agile approach towards work, and come out on top with ads that are consistently performing well across all devices and platforms.

Furthermore, thanks to the several Creative Management Platforms (CMPs) available in the market, you don’t have to go through the hassle of getting third-party specialist agencies onboard for front-end skills.

By using the drag-and-drop functionality that a CMP offers, your in-house team can easily produce rich media advertising campaigns in no time. You also have complete creative control on image resizing, text optimizations and file-size control. Not only this, but you can also rely on multi-variant testing to fine-tune your campaigns for the best results, and use live performance analytics to measure how people are responding to your ads.

HTML5 ads are easier to create than ever, especially if you have the right tools at hand. When paired with a Creative Management Platform (CMP), marketers can track viewer data and use functionalities like heatmaps to gauge the success of their overall ad design, or real-time updating to revise banners that are already live.

Overall, you have an end-to-end, in-house solution for creating and running a successful HTML5 campaign at your fingertips, which is ideal for brands that want to save time, money and effort.

What’s more? According to eMarketer, video and rich media are destined to see the greatest growth among the various kinds of digital display in the coming years. As an advertiser, where every click and conversion matters, HTML5 can serve as an effective means of engaging potential customers.

Afterall, in today’s competitive landscape, grabbing a customer’s attention has become somewhat of a challenge for every brand. Whenever someone engages with your ad campaign, they’re consciously choosing to take a leap of faith and trust you to deliver on the primary punchline of your ad. The more you treat your potential customer-base like partners, the faster you can leverage the latest technology to deliver dynamic rich media campaigns that combine relevance, information, and interactivity.

In conclusion, HTML5 ads continue to perform better by consuming fewer resources, allowing multimedia banners, and being natively supported across all browsers. 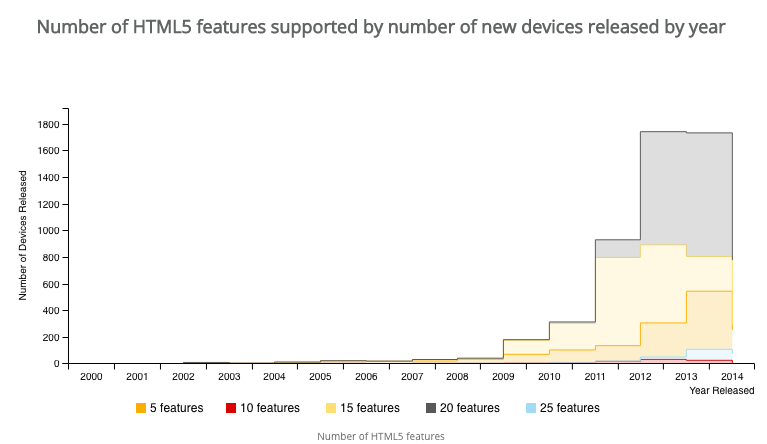 Not to mention, with the launch of more and more HTML5-capable devices in the past decade, it’s safe to say that your audience is ready for the next big thing in digital advertising.