We’re just a few months away from what might be the most controversial presidential election in US history.

Many candidates are using Display advertising as a way of raising awareness, collecting money and even bashing their opponent: 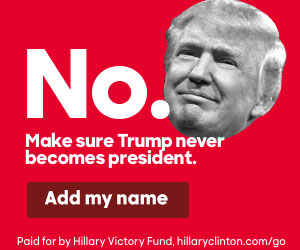 Note: Hillary only ran this ad for a brief period of time. Too controversial to be shown on a mass scale? Didn’t work? Who knows. But you can’t hide from Adbeat 🙂

There is a lot of interesting stuff to be learned about positioning and landing page design from political candidates.

First, let’s take a look at basic “funnel” each candidate is using.

The classic sales funnel usually looks something like this: 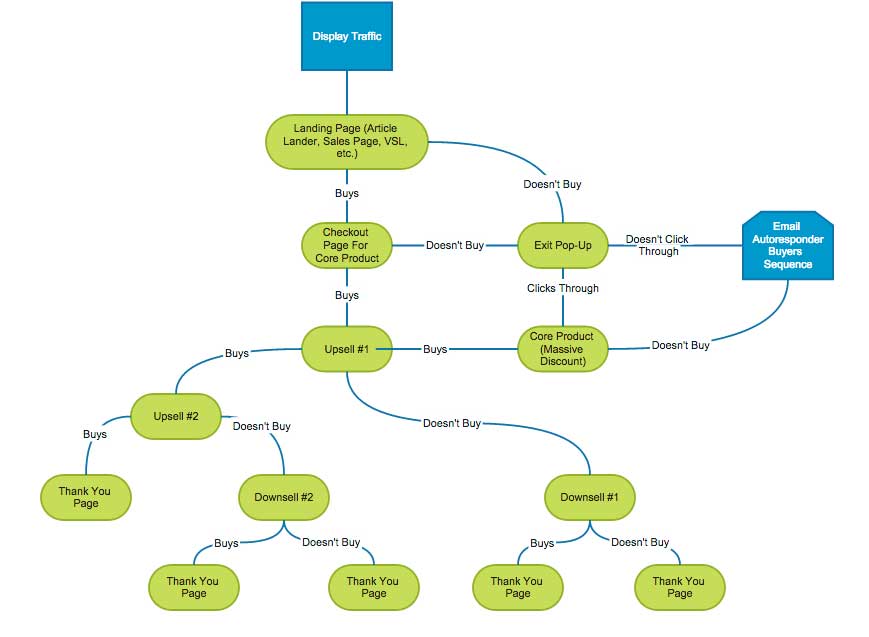 All candidates also have their own version of a sales funnel. Except instead of selling eBooks, software or courses, they are “selling” supporters the chance to donate to their campaign. The “Donation Funnel” has fewer moving parts, but a similar structure.

We’ll use Hillary Clinton as an example.

Traffic is sent to this page where you can opt-in to her email list: 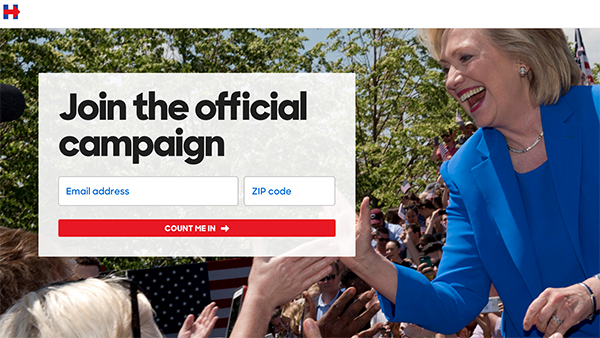 After you opt-in, you’re shown a page similar to one that a business would use to offer an OTO (one-time-offer): 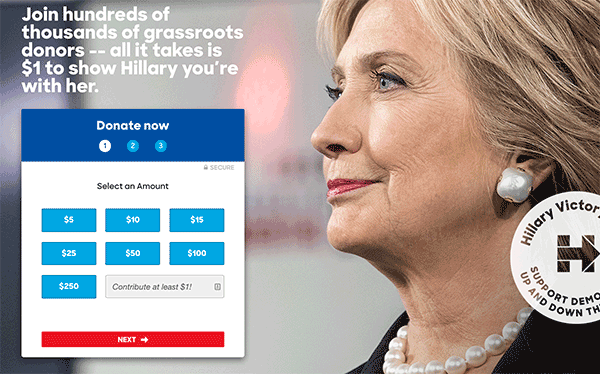 Then, over time, you’re hit with a few emails a week that continue to try to get you to donate more money to Hillary’s campaign: 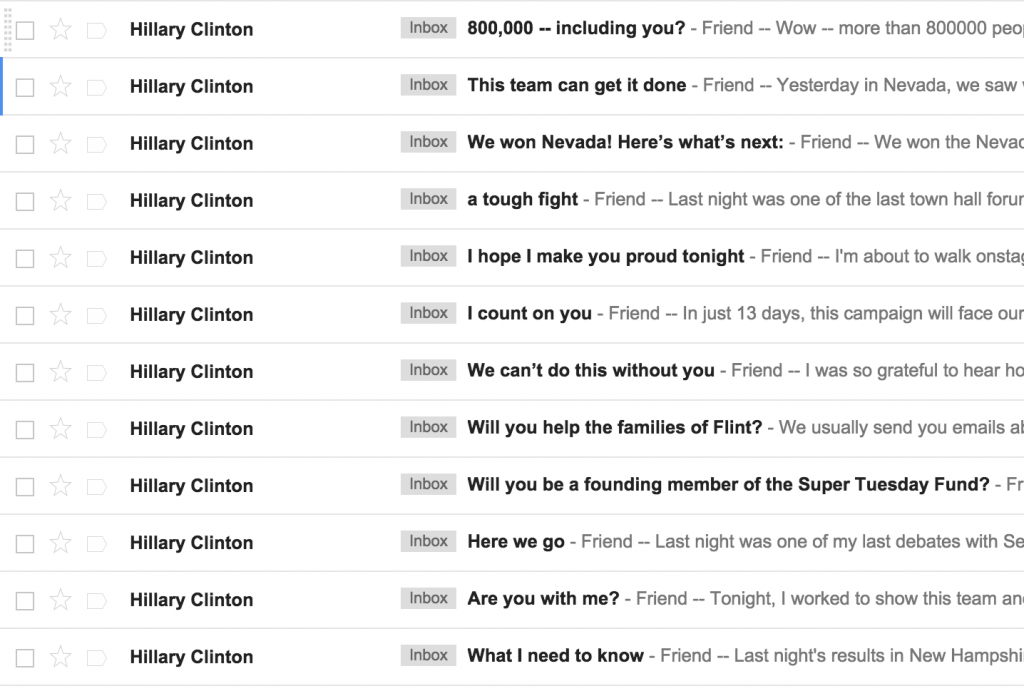 That’s the basic structure of what I call the “Donation Funnel.”

Now, let’s dive into the specifics of each candidate’s Display advertising campaign.

Hillary has, by far, the most robust display strategy at the moment. She spends hundreds of thousands on multiple ad networks, including direct buys. At the time of this post, she’s significantly outspending all other competitors.

She was pretty quiet for most of 2015, but came out of the gate hard at the beginning of 2016, just in time for the primaries. Her choice of networks is interesting. She spends, by far, the most with Advertising.com. Yet, she’s also spending quite a bit with two of the biggest Native networks, Outbrain, and Taboola.

Hillary chooses mainly  publishers like the Huffington Post (where she accesses the inventory through both Advertising.com and with a Direct Buy), plus other large news and business sites like AOL.com and Business Insider. 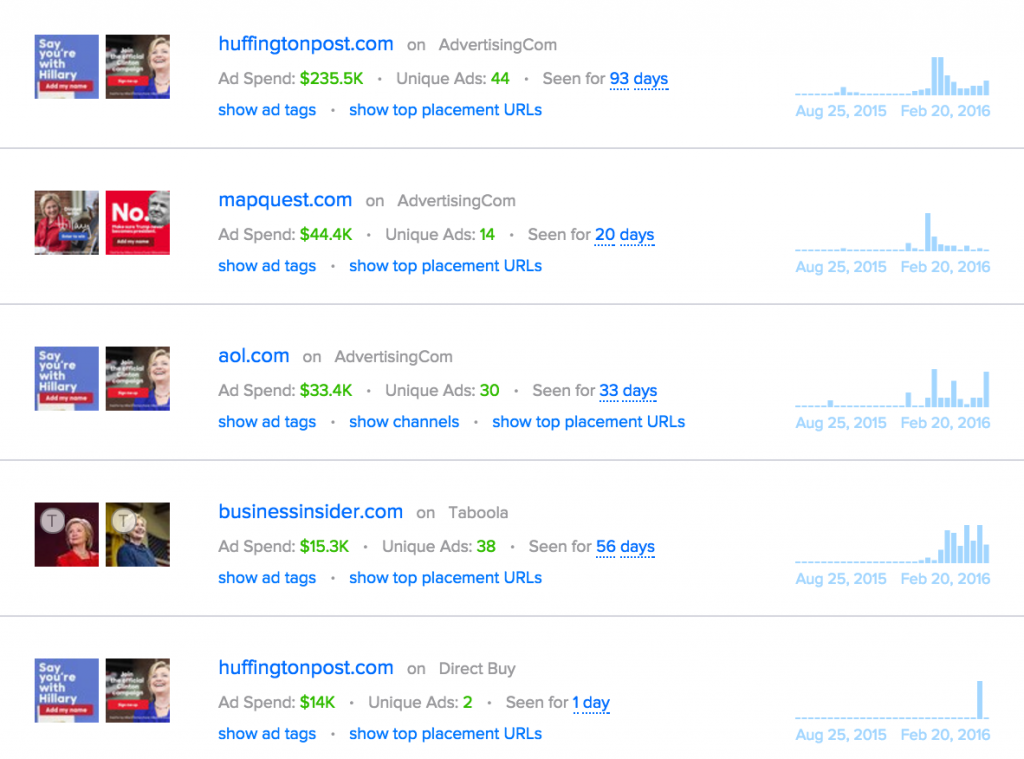 Hillary Clinton is like the Wal-Mart, McDonalds or Ford of politicians. She’s been in the public spotlight for almost 30 years. People know who she is and where she stands on various issues.

You can think of Hillary as a “Big Brand”.

Therefore, her ads focus less on her political views and more on how you need to “join” her. She also throws in a few anti-Trump ads for good measure. 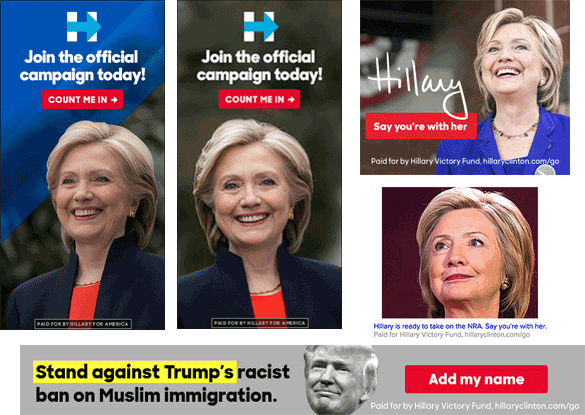 Hillary uses the same template and concept on all landing pages: 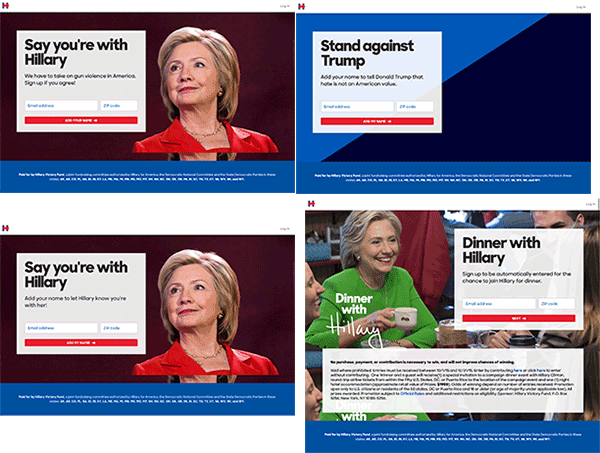 Hillary also sends you to a donation page when you opt-in to her list. 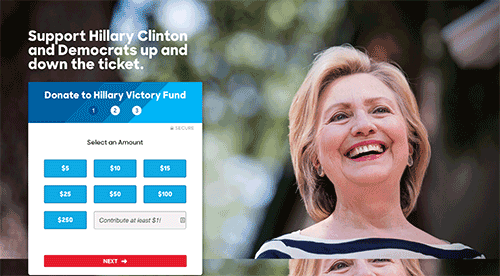 Bernie had a big push near the end of December.

I’m assuming this was to boost his presence right before the primaries.

Interestingly enough, he backed down  for most of January.

Even though he and Hillary are neck-and-neck in the race, Bernie spends far less than Hillary. He also relies on Direct Buys and Google as his primary traffic sources. 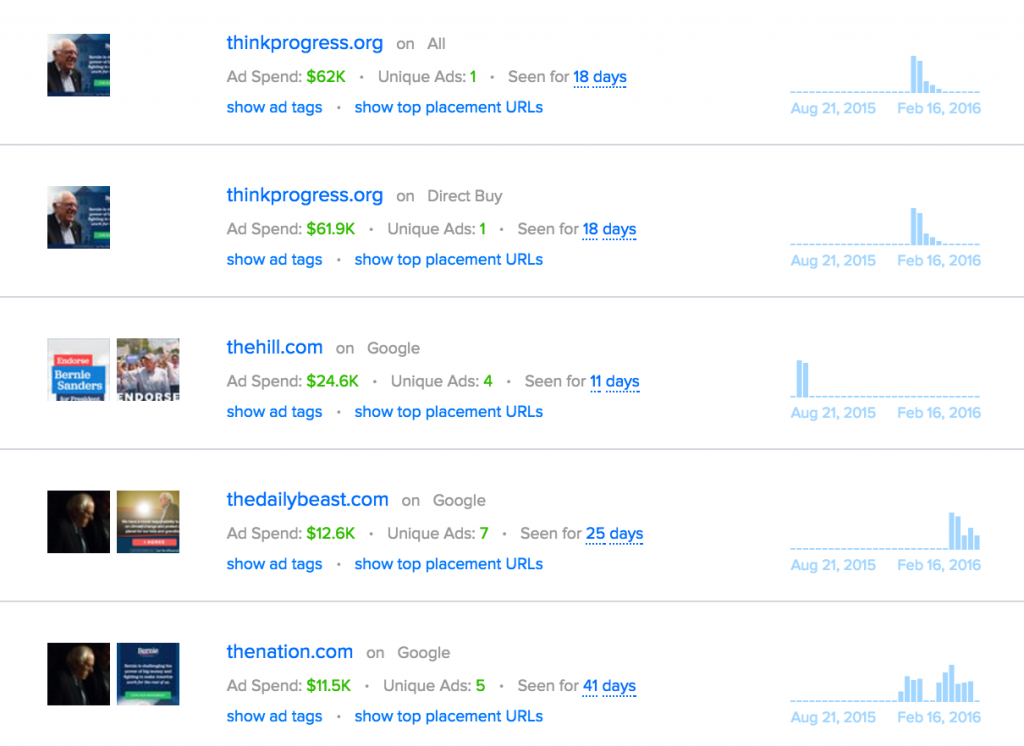 Sanders’ ad copy is quite different than Hillary’s ad copy.

Bernie is primarily known for his ideas on social change and reform. He refers to his campaign as a “political revolution” in his Display ads.

Also, notice that there is an ad where he’s wearing a baseball cap and has his sleeves rolled up. This gives off the appearance of him just being your “average Joe” and not a Wall Street fat cat, which he frequently speaks out against.

His ads also include a tiny little piece of text at the bottom that says “Paid for by Bernie 2016 (not the billionaires)” which continues the theme of being a President for the people, and not for the big corporations. 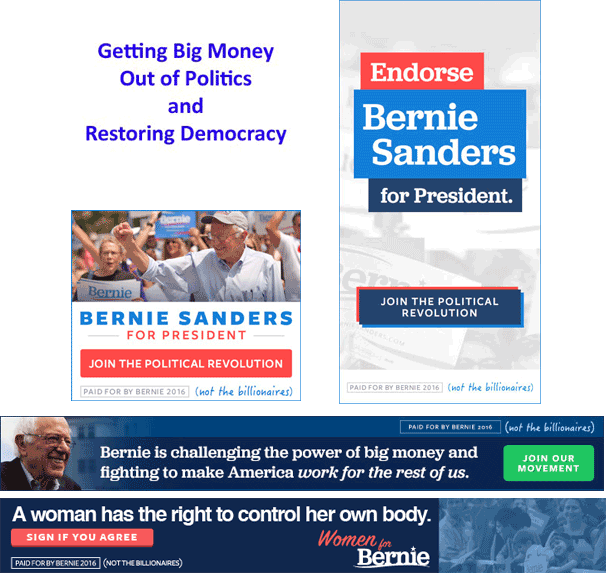 Sanders’ first landing page is a simple “Support Bernie” page that’s similar to what the other candidates use: 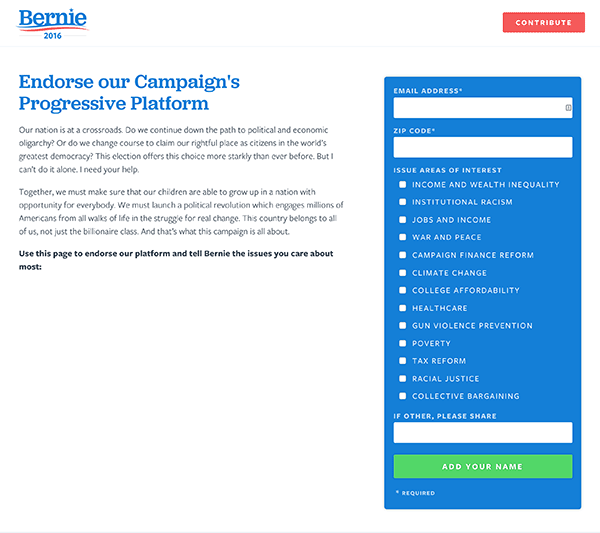 The second landing page that Bernie is testing is a petition page to support women’s rights. 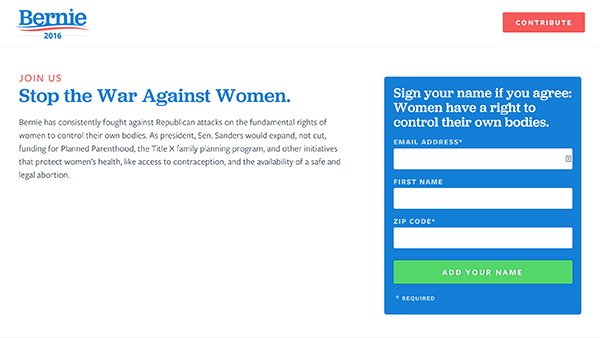 Of course, Bernie has his own donation page. The only difference is that Bernie offers the option for supporters to make an automatic monthly donation. This is similar to a recurring subscription for a consumer product or service. 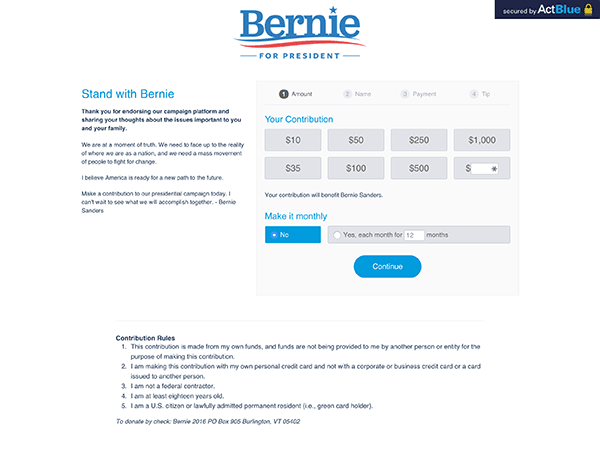 Ben Carson is not a favorite to win the Republican nomination. However, he is the highest spending Presidential candidate by far.

Carson has spent an estimated $6,444,032 on Display over the past year. 95% of that spend has gone towards the Google Display Network.

You’ll notice that, as of February, he has turned off all Display campaigns. 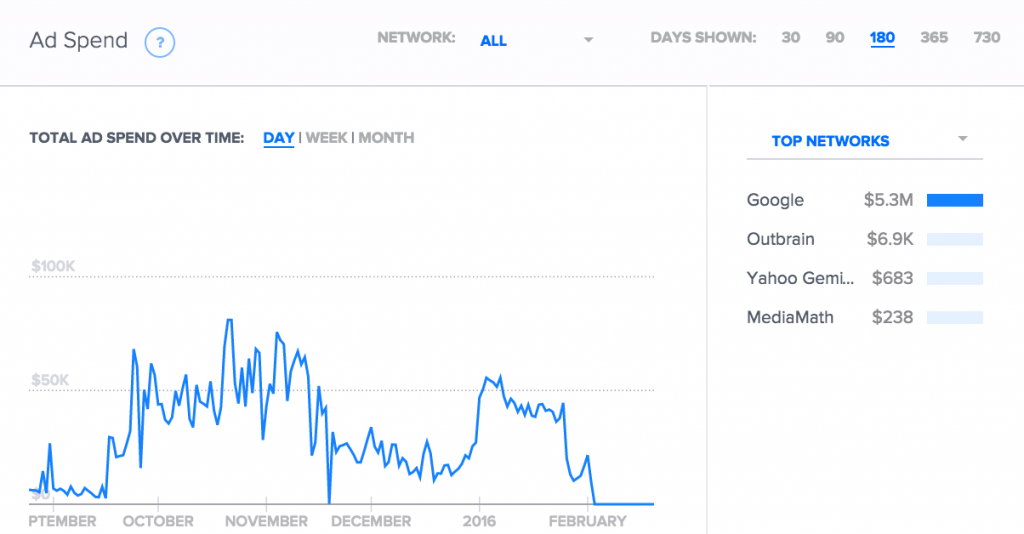 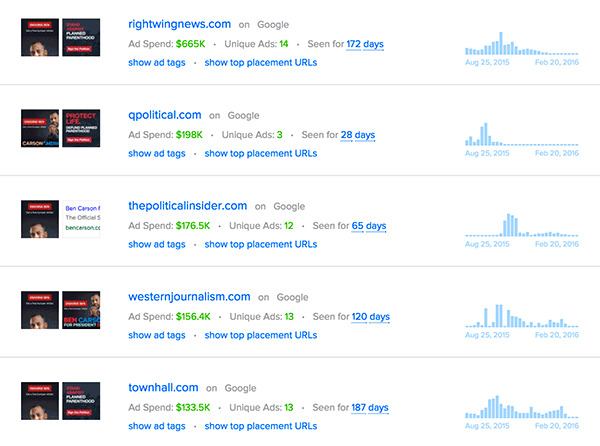 Carson used a combination of ads that offered a free bumper sticker (his “ethical bribe”), and ads that promoted his stance on abortion.

It appears he was the only candidate who offered an ethical bribe in exchange for signing up for his newsletter. 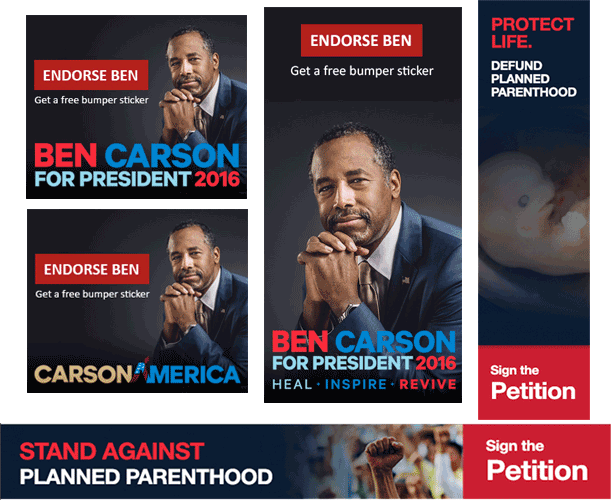 The first landing page was an opt-in page tied to the free bumper sticker:

The second is was a landing page that asked for an immediate donation without having to opt-in. 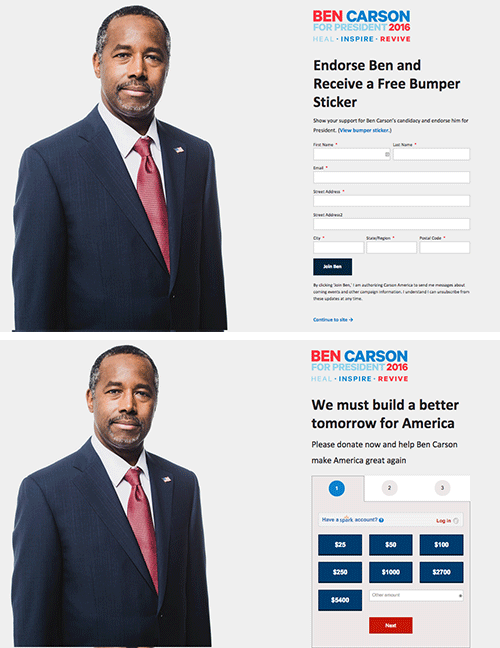 Despite being a front-runner to win the Republican nomination, Ted Cruz’s Display campaign is nearly non-existant.

Ted doesn’t lean towards any specific theme or publisher category. Most are either conservative news sites or general interest sites. 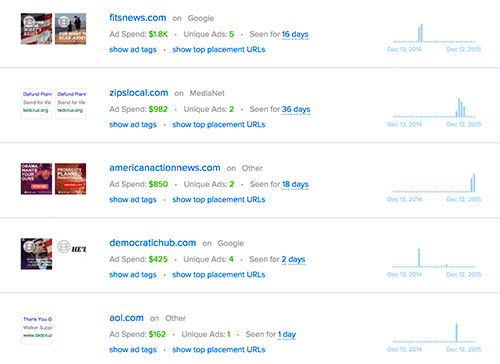 Ted Cruz’s creatives focus on the issues he supports; the right to bear arms, pro-life and border security. This is a common theme among candidates who aren’t as well-known. Hillary can use branding ads because she’s been in the spotlight for decades. Compared to Hillary, Ted Cruz is relatively unknown. 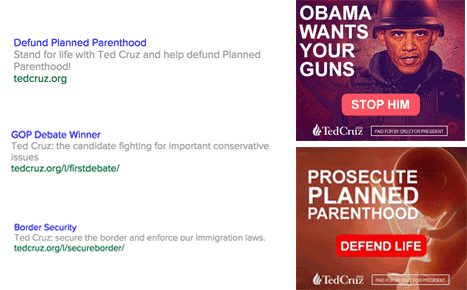 Cruz uses a variety of landing pages that focus on signing petitions for specific causes he supports.

One interesting thing to note is the imagery he uses on his pages.

For example, take a look at the gun control page.

He uses feelings of nostalgia to move his supporters. The landing page shows an image of children hunting, and has the phrase, “fight for that memory.”

The idea is to make supporters remember their first experience with hunting and guns, which tends to be hunting with someone in their family. 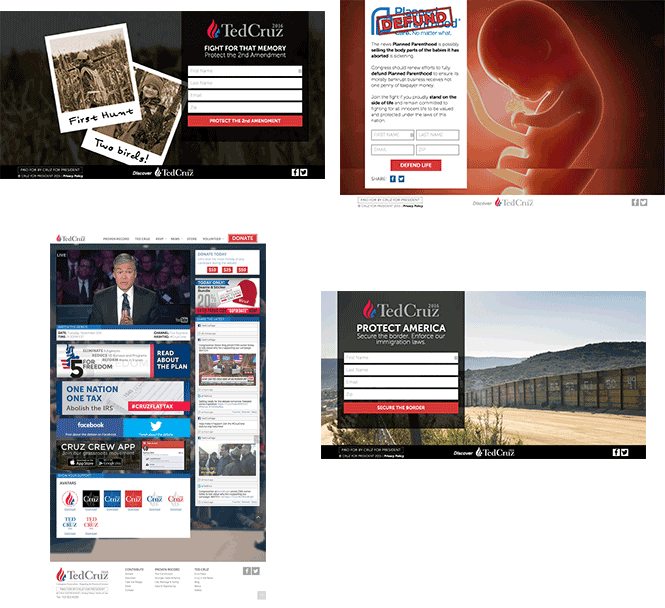 And of course, Cruz also has a donation page: 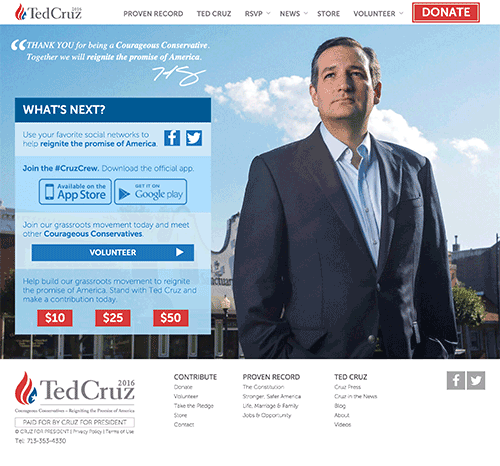 Despite how close this year’s race is, most candidates still choose not to go with Display advertising as one of their main advertising channels.

Will this change once the nominees have been chosen?